Fear Me Not (Den du frygter) 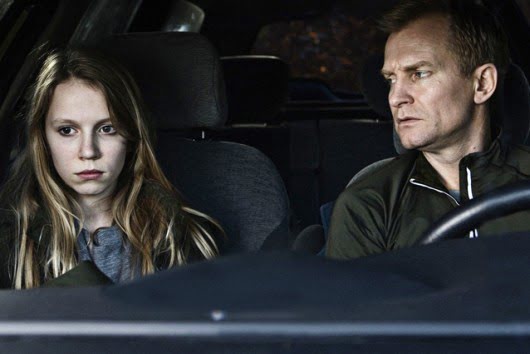 When a new anti-depressant is put into test trial, Mikael (Ulrich Thomsen, "The Celebration," "Brothers") signs up on a whim, but he clings to the drug even after the trial is abandoned and his behavior becomes more than disturbing to those around him in cowriter (with Anders Thomas Jensen ("Brothers," "After the Wedding"))/director Kristian Levring's ("The King Is Alive") "Fear Me Not."

A calm, quiet performance from Ulrich Thomsen initially seems too restrained, but Levring and his star prove they know exactly what they are doing in this uniquely startling character study. When "Fear Me Not" gets to its twist, the actions that follow are all the more shocking because of the calm that has come before the storm. At first, everything seems fine with Mikael and family. Their beautiful home on a lake is being renovated, wife Sigrid (Paprika Steen, "The Celebration," "Open Hearts") is affectionate (in the steam room!) and teenage daughter Selma (Emma Sehsted Høeg) seems like a great kid. But the plumbers have left a manhole cover open in the garage, letting a rat in, Mikael seems just a little too perky around sister-in-law Ellen (Stine Stengade, "Flame & Citron") and Sigrid begins to voice her worries over Mikael's extended leave of absence from work. He does not tell her about the drug trial (or the rat), and when after a number of weeks a fight breaks out in the waiting room between two participants, brother-in-law Frederik (Lars Brygmann, "The Inheritance") is shocked when Mikael hauls off and breaks one of their noses. Mikael tells Frederik he's disposed of the pills. When Sigrid proposes a weekend away, Mikael informs her he has decided to visit his mother instead. He goes off alone and begins to do some very strange and nasty things. A meeting with friends of twenty years past hints at a radical family history. He never does visit mom. Back home, events escalate and secrets kept from Sigrid begin to form a pattern that alarms Selma. Thomsen really crafts his character to the film's astonishing arc. Just when he maybe seems a little too removed, a burst of warmth comes through. He narrates his experiment in the 'diary' he writes on his laptop and we are told that one never knows how bad one felt until one begins to feel better, which he says these drugs are helping him do. Like those bursts of warmth, which make one trust Mikael's intentions, we also see slips of concern when his behavior gets weird. An incident with a teenage girl in his old home town causes him to go home and throw away his pills, which he has been taking more frequently than originally prescribed. Also good is Sehsted Høeg as the loving yet alert daughter. She has chemistry with Thomsen, more than Thomsen has with Steen, who plays his wife (and this is the way this should be played, not a criticism). The film has been beautifully shot and edited, with natural weather changes signifying emotion. A shot of father and daughter face-to-face at their respective computers has a backdrop of a bright blue sky with puffy clouds. As the story progresses, storm clouds move in. The pallet is blue, warmed by reddish golds which do not always translate as warmth (watch that red truck reflected in the glass of the auto mechanic's shop and the very different uses of the family steam room). An early scene of Mikael rowing with Sigrid's brother Frederik is disorientingly edited, the men one in front of the other being crosscut to left and right of screen. "Fear Me Not" is a disturbing psychological study that doesn't spell everything out but leaves clues in the way its been shot and edited. Mikael's darker tendencies towards those close to him are transferred to others and his actions can be pieced together like a puzzle with a few missing pieces in this deftly written thriller.

42-year old Mikael (Ulrich Thomsen) suffers quietly from severe depression. He learns about a clinical study for a new anti-depressant drug and volunteers to take part in the program. However, the drug is found to have serious and dangerous side effects and the study is cancelled. Mikael, though, continues to take the drug and loses all control in “Fear Me Not.” Danish writer-director Kristian Levring, who co-scripts with Anders Thomas Jensen, takes what, on the surface, appears to be a rather bland tale of growing psychosis. Do not be fooled, though, by the film’s low-key nature and subdued acting by star Thomsen. This intense character study pulls no punches as Michael develops a combined sense of peace of mind and physical menace. Mikael, inexplicably on leave from work for months, seeks the help of research doctor, Mikael’s brother-in-law Frederik (Lars Brygmann), to get into the aforementioned clinical study. He is accepted and given a six-month supply of the experimental anti-depressant drug. Things appear to go well for Mikael as he follows the prescribed dose of one pill each morning. Outwardly calm, chinks begin to show in his emotional armor as he, and others in the study, display increasingly violent behavior. The Swedish institute running the study pulls the plug and Mikael is told to return the remaining supply of pills. He lies, telling Frederik that he threw them all away. He did not, though, and begins losing track of how many pills e takes. Mikael’s family life begins to suffer as his wife Sigrid (Paprika Steen) begins to worry about her husband and his increasingly erratic behavior. When she proposes that they go away for a weekend alone, he tells her that he already planned to visit his nursing home bound mother (Bodil Udsen) – alone. Instead, he moves into his mom’s home (where he has not been to in 20 years) and further isolates himself from his loved ones. He meets an old school friend, Kenneth (Bjarne Henriksen) who invites him over for a beer. Two other old acquaintances there make disparaging, sexually overtone remarks to Mikael about his mother, making me wonder what the heck is going on! This, though, makes the film ever more intriguing. It is a sign of skilled writing when the plot takes an unexpected twist that I, a snooty critic, did not see coming. The beauty of this story turn is the logicalness in its surprise. Couple the deft writing, direction and superb acting, especially Ulrich Thomsen, with the lush, beautiful photography (by Jens Schlosser) and you get an above average study that deserves international acclaim.