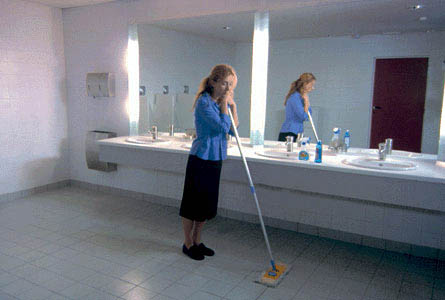 Amelie (Sylvie Testud) is a bright young Belgian woman who spent her formative years growing up in Japan. Her fluency in the language secures her a job as translator for the giant Yumimoto Corporation and her dreams to be “Japanese” appears to have come true. But, the naïf is not used to the customs of the Japanese workplace and commits a number of social missteps, angering her bosses. The harder she tries to please the further she falls in the corporate hierarchy in the cross-cultural “Fear & Trembling.”

Amélie (Sylvie Testud, "The Château," "Murderous Maids") returns to Japan, the beloved country of her birth which she left at the age of five, determined to assimilate into its culture. She gets hired as a translator by the Yumimoto Corporation and admires her immediate superior, Miss Mori (Kaori Tsuji), although Miss Mori's boss, Monsieur Saito (Taro Suwa, "Ju-on," "Cure"), gives her Sisiphean tasks to keep her busy. Oddly enough, it is when she uses her knowledge of its language, that the corporation radically turns on her, forcing Amélie to approach her superiors like ancient Japanese emperors - with "Fear and Trembling." The French have certainly been examining the workplace from many angles in the past few years, from the sexual politics in the PC age of "The Closet" to the class barriers and loss of livelihood in Jean-Marc Moutout's "Work Hard, Play Hard" and Laurent Cantet's films ("Human Resources," "Time Out"). "Fear and Trembling" is an odd little film which purports to examine both power and the differences between East and West. However, if Japanese businesses were run the way Yumimoto Corporation is depicted, the country would never have achieved the economic dominance it possessed into the 1990's. Japanese management may be depicted like something out of "Office Space," but that exaggeration is the stuff of black comedy and a tool of alienation. Sylvie Testud is simply terrific in this (and the winner of the 2003 Best Actress Cesar.) The pecking order is obviously of critical importance in Japan, as Amélie introduces the management tree from the top on down. It is of great significance when Miss Mori suggests that Amélie should call her by her first name - Fubuki - after Amélie seeks her advice about a serious dressing down (Saito's boss Monsieur Omochi (Bison Katayama) comes screaming after she has deigned to speak to customers in Japanese and Saito has ordered her to 'forget' the language!). In a girlish bit of confidence, Amélie describes how as a young girl, she wished to be God, then Christ, before realizing she'd have to settle for martyr. Be careful what you wish for. Redemption seems at hand when Monsieur Tenshi (Yasunari Kondo) - the Japanese word for angel - asks her to research a report on her home country's (Belgium) invention of a fat free butter. The report is a hit, but once again, Eastern cultural differences prove a rude awakening - Omochi chews out Tenshi for taking the job upon himself and Mori becomes vindictive, believing Amélie was seeking promotion to Mori's level too quickly. After being assigned ill-fitting accounting tasks which make Amélie believe Yumimoto has become hell, Fubuki goes even further, assigning Amélie to daytime lavatory duties. Refusing to lose face, Amélie waits out her one year contract, then goes up the ladder to resign, using the titular deference and evoking surprisingly different reactions on each rung. The final coda, with Amélie finding success back 'home,' is intriguingly ambiguous. Writer/director Alain Corneau ("Tous les Matins du Monde"), who also won a Cesar for adapting the screenplay from the novel, has a consistently compelling movie on his hands when he remains on Amélie's reaction to her workplace. However, a couple of his side riffs are discordant. Amélie's penchant for 'throwing herself into the view' from a 44th floor office window is a bit of fancy too reminiscent of the Canadian film "waydowntown." It is unclear why an aerial view of Tokyo (Amélie is from the Japanese countryside) should provide her comfort and the device serves little purpose. A sudden cut to a climatic scene from "Merry Christmas, Mr. Lawrence" is also awkward, pushing a lesbian undercurrent (Amélie frequently mentions Mori's great beauty) to the forefront then abandoning it. Testud, who appears to be fluent in the Japanese language, throws herself into this role and is wickedly funny as she flounders in the perverse environment. The actress projects an intelligent young woman not used to failure who nonetheless deals with it in imaginative ways. Kaori Tsuji is more enigmatic, the initial friendly young woman at odds with the vindictive one. Yasunari Kondo brings much needed compassion to the film, as does Sokyu Fujita as the corporation's kindly but remote head. Bison Katayama is the most colorful employee as the irrationally angry yet jocular middle man. "Fear and Trembling" depicts Japan, a country known for its workaholics, as the type of place a slacker could earn his living in by simply not calling attention to himself. A powerhouse performance from Sylvie Testud and bizarrely comic office politics make it work nonetheless.

Sylvie Testud won France’s Cesar Award for best actress in this film by Alain Corneau from Amelie Nothomb’s autobiographical novel and I can see why. The fresh-faced actress gives a subtle, inner performance as a young woman who simply wants to fit into the world in which she grew up. But, a kid’s world doesn’t translate into an adult world – especially one as homogenous and resistant to outsiders as Japan. Amelie is a fish out of water, a stranger in a strange land as she fervently tries to cope and fit in at her new company. But, as she says, she fell “from divinity to the restroom” as her demotions become increasingly more debasing. The cool thing about Amelie’s story is the pluck and resilience of the character as she suffers taking on jobs that are increasingly more demeaning. Her stalwart, hard-working spirit gains her the hidden respect of her co-workers but they, too, are judged by their bosses and cannot outwardly show Amelie empathy. Fear & Trembling is an immersion into a very different, very foreign culture that expects, and will tolerate no less, perfection in things Japanese. To be anything else proves the weakness of the foreigner to the Japanese. (Of course, when Amelie shows her proficiency in the language during a meeting she is soundly reprimanded – don’t “understand” Japanese, she is ordered, in front of Japanese.) This two-sided world is well brought forth by helmer Corneau and his source material. The clash of culture, David versus Goliath tale cuts deeper than the overly praised “Lost in Translation” as it puts naïve Amelie into a culture that defies the Western ethic of resourcefulness in the workplace. Just because you can help make things better doesn’t mean you should act upon it, the film says. Also, the politics of the office are all pervasive as Amelie’s immediate boss, beautiful 29-year old Fubuki Mori (Kaori Tsuji), views the Belgian’s good works as a direct threat to own future. You are always rooting for Amelie, though, and in the end can applaud the success she drew out of disaster. You don’t get the bright lights of Tokyo, here, as Fear & Trembling” immerses the viewer in the office culture of Japan. It’s not the kind of place us Americans would like but, realistic or stereotype, it is an interesting look into a culture not well known to the West.