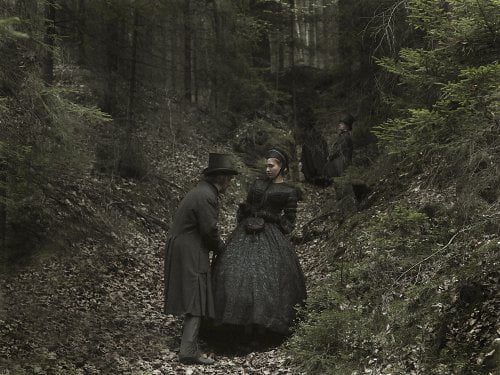 A man aspiring to the intellectual moral values of the Age of Enlightenment is waylaid by his lust for the beautiful, young Margarete (Isolda Dychauk), and so he makes a deal with the town Moneylender (Anton Adasinsky) to attain her. But moneylending is but a mask for the Devil, who has every intent of collecting the soul of "Faust."

A man aspiring to the intellectual moral values of the Age of Enlightenment is waylaid by his lust for the beautiful, young Margarete (Isolda Dychauk), and so he makes a deal with the town Moneylender Mauricius (Anton Adasinsky) to attain her. But moneylending is but a mask for the Devil, who has every intent of collecting the soul of "Faust." Russian director Alexander Sokurov has added a film to his trilogy on the corrupting influence of power ("Moloch" on Hitler, "Taurus" on Lenin and "The Sun" on Emperor Hirohito), but the fourth film in his tetralogy isn't based on a WWII figure but on Johan Wolfgang Von Goethe's 1808 version of the Faust legend, a source of cinematic inspiration since F.W. Murnau's 1926 silent. This stylish take on the tale (shot by "Inside Llewyn Davis" cinematographer Bruno Delbonnel with a dynamic, period appropriate score by Andrey Sigle, "Alexandra") is steeped in Teutonic sensibilities, often recalling the early works of Werner Herzog. In a scene reminiscent of "Frankenstein," we're introduced to our antihero (Johannes Zeiler) as he roots around the torso of a cadaver, hoping to find the seat of the soul. Throughout the film, Sokurov will contrast the ways of the flesh (everyone constantly looks to consume it when not succumbing to its weaknesses) with that elusive essence of spirituality. He also has an unusual take on the familiar legend, Faust not signing his contract until the final reels of the film's 138 minute running time. Until then, we follow a destitute Faust, occasionally meeting up with his friend Wagner (Georg Friedrich, "The Piano Teacher"), who goes mad on a similar intellectual quest. But it is Faust's journey with Mauricius, who has 'something to show him,' that comprises the meat of the film. That something is Margarete, first seen working in an outdoor laundry with many other young women like a busy harem set in natural splendor (the film is cast in toned down sepias except in Margarete's presence, when colors shift to greens and blues). Mauricius, who describes himself as an ancestor of Eve's original seducer, bares his obscenely grotesque body, complete with a 'tail' which resembles a scrawny erect penis, to share the women's waters, and it is Adasinsky who steals the show here. With pupils which frequently fade to deep black, Adasinsky walks with a freakish, hunched waddle, constantly reminding Faust of 'wings' which we never see but his stance suggests. Having murdered Margarete's brother Valentin, Faust is now witness to her family's financial struggle. It is his desire to 'save' her (something Mauricius points out is lust masquerading as nobility) which spurs his need of the moneylender's services. The film is often murky as to its meaning, with such odd notes as the moneylender's 'wife,' (Hanna Schygulla, "The Marriage of Maria Braun," "The Edge of Heaven"), an elaborately attired woman with an off kilter laugh whom Mauricius claims is merely following him around. There are bizarre moments of humor, such as a young apprentice bodily carried away from observing a gynecological exam or crowds trying to pass through a tunnel against an oncoming cartful of crated pigs. Yet even if not all of Sokurov's meaning is clear, it is fascinating to wander through this world steeped in morbid corporeality and radiant innocence. The effect is often like being inside the paintings of Bosch and Bruegel, the homunculus created by Wagner from 'the essential oils of asparagus and dandelion with the liver of a hyena looking like a Cabbage Patch rendition of Lynch's "Eraserhead." "Faust," which controversially won the Golden Lion at the 2011 Venice International Film Festival, is a dense work which occasionally tries patience, but it is also the work of a true auteur and its sights and sounds are mystical and enthralling.