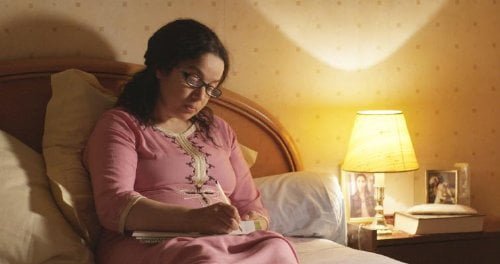 A mother accompanies her 18 year-old daughter, a medical student, to look at an apartment in Lyons. She's frightened by the strange neighborhood and dark foyer, but worse is the realtor, a woman who, seeing a Muslim veil, tells them that another agent has the keys and she cannot let them in. The mother, who works hard as a cleaner at several different jobs, is having a difficult time fitting into French society, her grasp of the language tenuous. She is also wrestling with a rebellious 15 year-old daughter who believes everyone exploits "Fatima."

The 2016 César Best Picture winner from Moroccan director Philippe Faucon (adapting Fatima Elayoubi's 'Prayers to the Moon') is the opening night film of the 21st Boston French Film Festival. In its simple, straightforward way, it is a timely reminder to look beyond preconceived notions. The film is reminiscent of Brazil's "The Second Mother" in many ways, but where that film used dark humor, a stylized production design and different mother/daughter disconnect, it was about class divides rather than immigration. "Fatima" is a quieter film that delves deeply into its subject, particularly regarding the way immigrants' children become culturally different from their parents. The eldest, Nesrine (Zita Hanrot, "Eden," "The New Girlfriend"), is supportive of her mom (as she leans on her heavily during intensive studies), but when she resists the charms of a young man, Fatima Elhouzi (Soria Zeroual) must remind her not to shut love out when it arrives. Nesrine is also harassed by her mother's neighbors, Muslim Algerians like herself who are envious of her achievement. Souad (Kenza Noah Aïche) acts out at school and takes up with Sélim (Zakaria Ali-Mehidi), a boy her mother does not approve of, but her mother is wiser than either of them understand. It isn't until Fatima is injured while working and begins to write down her thoughts, eloquently and in Arabic, that her daughters recognize the inner life within the cleaning woman. Non professional actress Zeroual doesn't need to shout to express Fatima's frustrations and worries, even as her eyes radiate only kindness. We can see on her face that she knows that 10 Euro bill she returns to Séverine (Edith Saulnier) from her son's laundry was a test of her honesty, even if Séverine does not. She perseveres through one obstacle after another, her ex-husband (Chawki Amari) allowed the role of gift-giver, until her subconscious takes over with that spill down an apartment landing's stairs. Faucon eschews cinematic style for straightforward story telling and his film is all the better for it, Fatima's heart and mind shining through. "Fatima" is a touching and thoughtful portrayal of a timely subject. Grade: