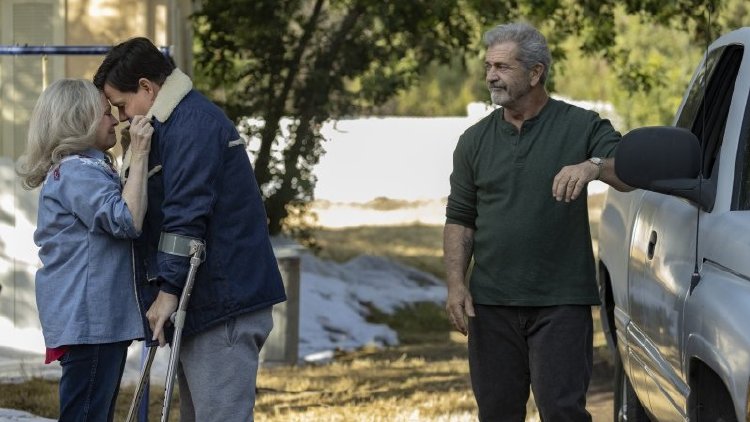 Stuart Long (Mark Wahlberg) was already past his prime for his chosen boxing career when his doctor advises him his body is rebelling against the sport which could kill him.  Distressing his mom Kathleen (Jacki Weaver) with his belief he could make it as a Hollywood actor, Stu moves to L.A. where his estranged dad Bill (Mel Gibson) works in construction.  But it will be spotting Carmen (Teresa Ruiz, TV's 'Narcos: Mexico') in the supermarket where he that will set Long on his eventual and remarkable path to becoming “Father Stu.”

Call this one the Mark and Mel rehabilitation tour.

Producer/star Mark Wahlberg heard about Stuart Long while dining with two Catholic priests from his parish and asked Rosalind Ross, a screenwriter he met while making “Daddy’s Home 2” with Mel Gibson (she’s Gibson’s girlfriend of many years), to write the script.  Thrilled with what she came up with, he asked her to make her directorial debut.  The resulting film is disjointed, perhaps reflecting Stuart’s flailing pre-priesthood approach to life (and a fledgling director’s desire to include every scrap of material), but undeniably affecting.  To be sure, this is indeed a ‘faith-based’ film and some of Long’s beliefs which some find inspirational others will decidedly not, but it is an incredible story.

A prologue features the young Stu (Tenz McCall) bopping about to Elvis in front of his beer-guzzling, grizzled dad.  If this was supposed to shed some light on how the loss of Stu’s younger brother splintered the family, it does not (and we never do learn exactly what happened).  We’re then treated to a ripped Wahlberg in a series of boxing bouts before a visit to the doctor reveals his mom’s anxiety over her son’s recklessness and delusional dreams.

Out in LA where he thinks he'll become an actor, Stu’s cheerful optimism sours somewhat behind a meat counter (his success getting a television commercial is thrown in randomly later, an aside with no foundation), until he spots Carmen and reacts like a heat-seeking missile but receives a cold shoulder.  Following a clue left by the flyer she pinned up, Stu’s soon eating in a church basement with seminary hopeful Ham (Aaron Moten, "Ricki and the Flash").  His persistence pays off, the atheist’s Baptism gaining him a dinner introduction to Carmen’s parents where her dad tells him about a saint who crawled to the Virgin Mary on his knees, the same type of respect he expects to be shown towards his daughter (this scene is a screenwriter laying the basis for a callback).  But just as this romance appears to be reaching its next natural step, Stu suffers a horrendous motorcycle accident.  While in a coma, he has visions of being comforted by the Virgin Mary, and when Stu calls Carmen to meet him after his recovery, she’s given an entirely different piece of news than the proposal she’s expecting.

Wahlberg, so committed he gained at least thirty pounds to depict the debilitating disease which struck Stuart in the seminary, uses his own bad boy past to mine the humor in this brash, foul-mouthed individual trying to attain the priesthood.  He’s given balance on either side, Ham a supporter while another seminarian played by 'American Horror Story's' Cody Fern is not amused.  Malcolm McDowell is the monsignor who tries to promote the Church’s front and continually fails in admiration of Stu’s persistence.   Gibson is laid back as the alcoholic dad roused by admiration for his son and he and fellow veteran Aussie actor Weaver enjoy a believable marital reconciliation.

After “Joe Bell” and now this, Wahlberg appears bent on cinematic atonement for past bad behavior.  The same can’t really be said for Gibson, whose Catholicism and fixation on martyrdom, which Father Stu espouses here as a means for closeness to Christ, doesn’t appear to be reflected in his behavior.  Still, Father Stu’s determination to turn his life around is an admirable message, however choppily directed.  Ironically, it is Gibson’s character’s subplot which is the least smoothly integrated.

Stuart Long (Mark Wahlberg) had aspirations to be a championship boxer but fate dealt a bad hand – he contracts a degenerative muscle disease that, ironically, is usually suffered by older adults. This physical transformation is soon joined by a spiritual one, with the result of “Father Stu.”

Mark Wahlberg seems to be on his own redemption tour, first with “Joe Bell (2020)” about a man on a crusade against bullying to honor his abused dead son. Now, he tells another true story about a sinner who finds god and the priesthood.

First-time feature film writer-director Rosalind Ross takes an interesting story of survival and perseverance and makes it a series of episodes with some tied to others and some not. Stu has dreams of greatness, first in the boxing ring as a fighter but just missing the right stuff to turn pro. When his recovery time after each fight takes longer he gets checked out at his mom’s (Jackie Weaver) insistence. The news is not good but it inspires Stu to find god.

The story has heart and Mark Wahlberg is obviously committed to the project (as star and producer). But the choppy storytelling and lack of experience behind the camera is telling and a more experienced hand could have made this a better movie. Also, casting Mel Gibson as Stu’s narrow-minded, bullying father who is one-dimension, at best, is questionable – the actor seemed to be in another film. Jackie Weaver, on the other hand, gives depth to her long-grieving mom.

I usually think that a movie is a cut above if it has heart – and “Father Stu” does have heart. But that is not enough. Good storytelling skills count just as much.