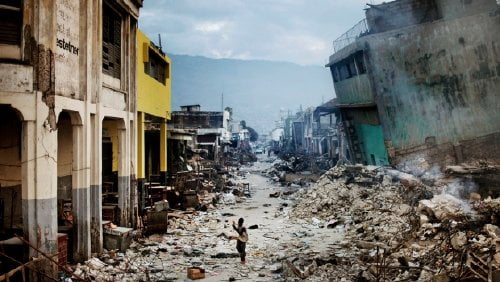 In January of 2010, disaster struck Haiti when a 7.0 magnitude earthquake killed an estimated 230000 people and left 1.5 million homeless. The international community rose to the challenge and pledged billions for the rescue efforts and rebuilding the country. But, two years alter, people still live in tents and the country remains in a shambles because of this “Fatal Assistance.”

Raoul Peck's ("Lumumba") impassioned documentary about international relief efforts in Haiti is a real eye opener with a disturbing undercurrent. For all the strong points he makes about NCOs' self interests and the administrative logjam created by the Interim Haiti Recovery Commision (IHRC), there are too many expectations for unqualified charity. And yet the film's provocative nature is what makes it so compelling. Peck points out that the Haitians have too little voice in their own country's reconstruction, but in criticizing efforts to rebuild in a manner which eradicates prior problems, he leaves no gray area - yes, there should be priorities, but not every critique hits a bulls eye. Efforts to add sizzle with famous faces sometimes work - Bill Clinton's advance team's preoccupation with his own publicity, for example - but others lack focus. We see Sean Penn on TV coverage and during a Clinton address, but his contributions are not commented upon. Still the complexities on display here are reminiscent of Alex Gibney's "No End in Sight."

Haitian-born Raoul Peck, with his thoughtful study of his native land, asks the question: Why, with billions of dollar pledged, is Haiti still struggling to survive, years after the massive earthquake devastated the country? The answer to that question, though, is complicated and Peck takes on the task to sort out the controversy and tell us “why.” When the disaster struck the island of Hispaniola (which Haiti shares with the Dominican Republic), international help flocked in to provide rescue, food, medical supplies and temporary housing. This assistance lasted until the initial crisis was over. After that, though, progress in restoring the country came to a grinding halt with an untenable bureaucracy that involves the over 4000 NGOs (non-government organizations) vying to, often at odds with each other and the country they pledged to support, rebuild the country. Peck points out that, before Haiti can be rebuilt, the removal of colossal amounts of rubble left by the devastating quake must be accomplished first. Herein lay one of the many problems facing the people of Haiti. That removal has a price tag estimated at $500 million to $1 billion. Two years after the earthquake, just $80 million has been actually provided for the task. Couple the lack of promised funds and the problem with dealing with so many NGOs and the stage is set for contract overlap, graft and corruption. Why, for instance, is a new hospital being built just hundreds of yards away from an existing one when it is more desperately needed 10 miles away? Peck brings to new light what is happening in his country after the news cameras stopped recording and all the celebrities had gone home. Disasters are big news – think Katrina – but the aftermath is not.