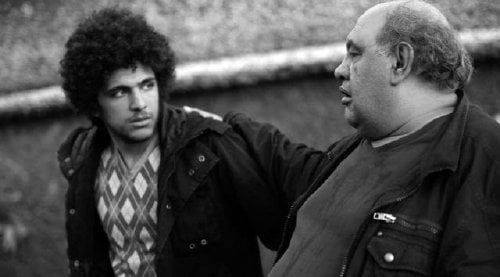 An obese drunk (Levon Haftvan) is cared for by his deaf son (Navid Mohammadzadeh), who uses heated glasses on his father's back as suction to draw blood to the surface before applying leeches. When unassisted, the man utilizes a vibrating machine as a "Fat Shaker."

One needs to really reach to find any meaning in writer/director Mohammad Shirvani's experimental film, which inexplicably won the 2013 Rotterdam Film Festival's Tiger Award. Does the patriarch represent Iranian tyranny, the younger generation trying to rid its body of impurities? And just who is the female photographer (Maryam Palizban) who suddenly appears, directing the older man to hold a screen behind his son's face so that she may photograph his angelic countenance? He tells the morality policeman who appears demanding IDs that she is his wife, but the son must be directed to call her his mother. Clearly she's an influence on the man's oppression of his son (he uses him as bait to scam young women who shouldn't be alone with a man for bribes), as she later tells the boy that with one shove, he can topple his father. Are iguanas popular pets in Iran or is this a reference to Jafar Panahi's 'This Is Not a Film?' Even so, there is no explanation for the turkey who wanders about their sterile, rented apartment. Sometimes the old man has a beard, other times not, and he only wonders about its absence once. (The woman comments that he looks much better without it, perhaps a commentary on Islamic fundamentalism?) He can wander onto the balcony of one apartment and reenter into another entirely. His son can be taken away handcuffed (and Shirvani has a real thing for handcuffs, which each of the three primary characters are restrained with in at least five separate scenes) and be right back in the kitchen washing dishes when the door closes. "Fat Shaker" is weird enough to hold interest for a while, but as it progresses, Shirvani's willful obscurity just smacks of pretension.