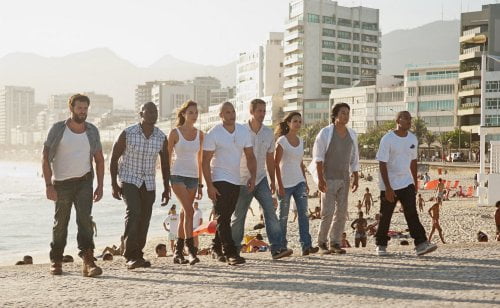 Having broken Dominic (Vin Diesel, all previous Fasts) out of custody, Brian O'Conner (Paul Walker, all previous except Tokyo) and Mia (Jordana Brewster) flee with him to Rio de Janeiro where they hunker in and assemble a crack team from all their previous adventures to pull off a $100 million heist with a new cop, Hobbs (Dwayne Johnson, "Tooth Fairy," "The Other Guys") and his team on the tail of the "Fast Five."

Or, more correctly "Fast & Furious Presents: Hobbs & Shaw," the first spinoff of the gearhead series that has grown increasingly cartoonish over the years. Even director David Leitch, who's demonstrated a talent for both action and comedy in "Atomic Blonde" and "Deadpool 2," cannot elevate this overlong, noisy globe trotting exercise in insult banter and ridiculous set pieces. If this film follows "The Fate of the Furious" in the franchise timeline, writers Chris Morgan ("The Fate of the Furious") and Drew Pearce ("Mission: Impossible - Rogue Nation") seem to have forgotten that we left the characters of Hobbs and Shaw as allies, because the film's prologue is followed by a side-by-side look at the differences between the two men and their first meet-up emphasizes animosity. A lot of your enjoyment of this film will depend on how much amusement you get from hearing Johnson and Statham repeatedly denigrate the size of the other's manhood and watching action stunts that defy reality. It says something that the writers felt the need to sidle into the science fiction genre to come up with a story in a franchise that began as a low budget street racing movie. Dom's family values are front and center here, Luke Hobbs (Dwayne Johnson, who entered this realm in "Fast Five") having a tight relationship with daughter Sam (Eliana Su'a), mostly upheld via phone call at inopportune moments. Both he and Shaw (Jason Statham, "Fast & Furious 6") confront fractured sibling relationships, Hobbs because he turned his Samoan father in for criminal activity and hasn't returned home since, Shaw because Hattie is his estranged sister, the two raised in criminality by Queenie (Helen Mirren, "The Fate of the Furious"), who's now saucily serving time. The (non-existent) sexual chemistry between Luke and Hattie is played as yet another provocation for Shaw to swallow. Oh, and Hobbs gets a kick-ass mom too (Lori Pelenise Tuisano's Sefina) when the gang ends up in Samoa for the film's climax. So we have a tattooed Samoan wall and suited Cockney James Bond combined to take on a 'black Superman,' Elba's character able to see data about incoming threats and thwart them when he's not stopping bullets with the palm of his hand. Hattie's capable enough to fight off Hobbs in her first encounter, even after she's injected herself with the Snowflake virus to quarantine it. But no worries! Eteon's Professor Andreiko (Eddie Marsan, "Atomic Blonde"), who 'programmed' the virus with good intent only to see it used for nefarious purposes, can not only reprogram it, but help this crew find the machine that can extract it from Hattie's blood before it kills her. If that machine gets a bit damaged before it can be used, it's nothing that Luke's chop shop owning brother Jonah (Cliff Curtis) can't fix. And I haven't even mentioned Madame M (Eiza González), the babelicious Moscow arms dealer (Eiza González), a thoroughly annoying cameo from a big name comedian or that Eteon is located beneath the remains of Chernobyl (because, of course bioscience labs should coexist with radioactivity). "Fast & Furious: Hobbs & Shaw" is probably going to make bucket loads of cash and that's fine for those who enjoy this type of thing (or who just want to escape the heat). But a movie that offs its most endearing character so suddenly and dismissively isn't even trying for complexity, the compassion of its 'good guys' limited to generic world saving heroics. This is product, pure and simple. Before the 60 minute mark (the movie runs 136 bloated minutes) tedium had set in for me. Grade: