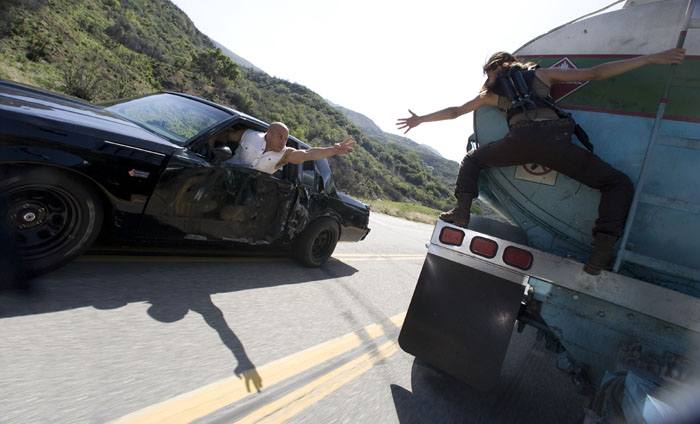 Eight years after ex-con Dom Torrento (Vin Diesel, "The Fast and the Furious") drove over the Mexican border, the death of a loved one brings him back to L.A. and reengages him in his feud with agent Brian O'Connor (Paul Walker, "The Fast and the Furious"). But a new adversary, a sociopathic drug dealer trucking high-grade heroin in over the Mexican border, brings the two together in a common bond that will once again find them "Fast & Furious."

Eight years after the original and about three years after Vin Diesel's career stalled out (Walker's never got past idle), the original quick and angry guys are back for the fourth installment of the series. Writer Chris Morgan's ("The Fast and the Furious: Tokyo Drift," "Wanted") already proven a predilection for action over logic and director Justin Lin, who's switched gears from Sundance darling ("Better Luck Tomorrow") to sequel hack ("The Fast and the Furious: Tokyo Drift") plays to his strengths. Diesel and Walker are relaxed in their roles and have some bromantic chemistry. The film starts with a stunt befitting a Bond film. Dom and his gang are in the Dominican Republic making a living jacking gas tankers ('liquid gold,' as Letty (Michelle Rodriguez, "The Fast and the Furious," TV's "Lost"), Dom's girlfriend calls it). On a mountain road, Letty jumps onto the moving four tank vehicle and splits it in two to be towed away. But the driver (Alejandro Patino) fights back, taking shots at Dom before bailing with his pet iguana. On a steep incline. Just before a hairpin curve. On a mountain. This is the reason one goes to see a film like "Fast & Furious," because the plot frequently neglects to make sense. Dom ends up back in L.A. to settle a score that just happens to converge with the F.B.I.'s hunt for drug lord Braga, so after some initial dust ups they team up. Now one has to wonder why neither of these guys would be recognized going undercover with street racers, for one thing, but "Fast & Furious" isn't concerned about matters like these. Later on, when the guys are hired as drivers, they're trucked down to Mexico in order to drive back across the border and I say, huh? But there are fast cars (including, ahem, a vintage green Ford Torino) and more women with perfect bodies than one can shake a stick at. The movie's as rough and dirty as a grease monkey. Cinematographer Amir M. Mokri ("Freejack," "Vantage Point") seems to switch between a grainy seventies look and CGI slickness while editors Fred Raskin and Christian Wagner alternate between the 'cut so fast and close no one can tell which end's up' and something less spatially challenging. Dialogue is often muddy in the sound mix. "Fast & Furious" is a good old drive-in movie without the drive-in. It ends with a rather amusing set up for the next sequel (after a howler of illogical plot twist) and now that the boys (and girls) are back, it might not be a drag.