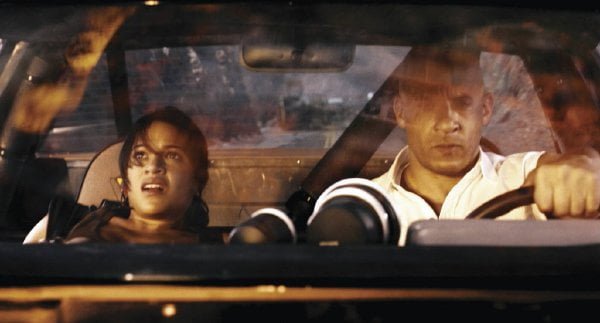 Federal agent Luke Hobbs (Dwayne Johnson) faces his biggest challenge ever. Renegade ex-SAS warrior Owen Shaw (Luke Evans) heads a ring that hijacks hi-tech government technology as it travels from point A to B. Luke is at wits end and reaches back to Dom Toretto (Vin Diesel) and his team of car thieves to help him break the hijacking ring in “Fast & Furious 6.”

Dominic Toretto (Vin Diesel) and his lady love from Rio are living a life of bliss on the Canary Islands along with new parents Brian O'Conner (Paul Walker) and Dom's sister Mia (Jordana Brewster), the rest of the crew scattered enjoying their ill gotten gains. Then Luke Hobbs (Dwayne Johnson) appears with a proposal - if Dom reassembles his team to help him nab Evans (Luke Shaw, "Immortals," "The Raven") and his team of super drivers, Dom's gang will be given immunity in "Fast & Furious 6." Director Justin Lin and screenwriter Chris Morgan, who've helmed and written the series beginning with "The Fast and the Furious: Tokyo Drift," turn in a new installment that is every bit as silly and over-the-top as the last, but the sixth edition is a bit of a let down, the plot this time a mere McGuffin to hang action set pieces and familial bonding onto. The bad guy's procurement of the thought-to-be-but-not-really-dead Letty (Michelle Rodriguez), who suffers from amnesia (really?!!), is the only thing that makes him the least bit interesting and his intended crime is underwritten nonsense. Even if the film still powers through on the strength of its likable ensemble and its death-defying stunts, it feels like the series may be running out of gas (a seventh is already in pre-production). The F&F gang regroup in an amusing montage that catches up with everyone (Roman's on his way to Vegas with a group of babes in a private jet announcing 'It's Roman bitches!' on its tail). And it's the interplay of these characters that maintains interest - Han's developing relationship with Gisele (Gal Gadot), Dom's patient pursuit of Letty, Roman's cheapness and hijinx butting against Tej's (Chris 'Ludacris' Bridges) serious focus. There is also the undeniable thrill of outrageous chase scenes, hand-to-hand combat, a Dom and Letty race through the streets of London and one whopper of a climax featuring an enormous Russian cargo plane, multiple cars and harpoons on a seemingly never-ending runway. But the script is just sloppy. Han (Sung Kang) and Roman (Tyrese Gibson) go to a pawn shop and engage in fisticuffs to find out information they already knew. Hobbs's new partner, Riley (Gina Carano, "Haywire"), is great for some action scenes, but her character is written off with a cheap shot that adds nothing to the narrative while Elsa Pataky's Elena apparently achieves sainthood. If you haven already gotten the fact that family is sacred in Dom's world, you'll be reminded, over and over. The "Fast and Furious" series has been a cash cow for Universal and most of its cast, who rarely make appearances elsewhere (someone get Tyrese Gibson more screen roles!). The latest is fine popcorn fare, but the series needs stronger stories before it becomes fusty fast.

It amazes me that the “Fast and Furious” franchise is able to keep cranking out the sequels and keeps their fan audience coming back for more. With “F&F6,” we are getting into James Bond territory as Toretto’s team head to exotic locals like London, Scotland and the Canary Islands. There are the requisite car races with flashy vehicles, including a vintage Jensen Interceptor. Mostly, though, it is about thwarting the militant hijackers who attack and raid army convoys. There is another story going on here, too. Remember Letty (Michel Rodriguez) from the earlier ”F&F” films? She died, supposedly, a while back in the series, but divine intervention (and a chintzy sleight of hand by the screenwriters) brings Dom’s old squeeze back – suffering from amnesia. (What?) No other explanation is offered as to how and why she returns and, with so much fast paced action (there is one high speed chase, for example, involving a battle tank) that you do not care about how and why. The cast benefits from their years of working together on the franchise and there is a natural ease among them. The addition of Dwayne Johnson to the series also helps because of the high likability quotient the muscular thespian garners. Martial arts champ Gina Carano is also on board – mainly so she and Letty can beat the snot out of each other – but her character’s arc does not make any sense. That is one of the problems with a franchise so matured. The writers get lazy because they think no one will notice mistakes and misdirection. If “Fast & Furious 6” pulls the big bucks at the multiplex, they may be proved right.