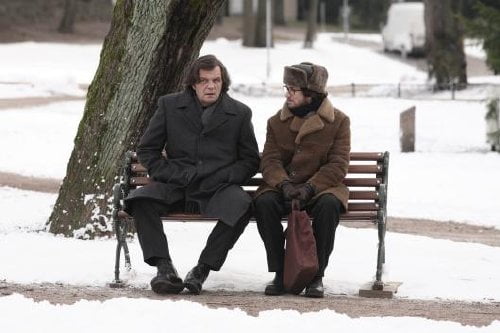 Sergei Gregoriev (Emir Kusturica) is a KGB colonel who likes the comforts of his relatively lofty political position in the Soviet Union. He is disgruntled, though, with the dangerous path his government is taking in the fast escalating Cold War with the US and decides to take things into his own hands. He contacts a young French engineer, Pierre Froment (Guillaume Canet), working in Moscow and offers to give him top secret information on a major Soviet spy ring operating in North America. Stunned, Pierre agrees to bring the shocking information to French intelligence, which waste no time in passing the scathing documentation to the CIA. Sergei agrees to become a mole in the KGB and is given the code name, “Farewell.”

French engineer Pierre Froment (Guillaume Canet, "Tell No One," "Spies") does a favor for his boss, who in turn does favors for France's DST chief Vallier (Niels Arestrup, "A Prophet") and before he knows it, he becomes involved in a fast friendship and deep espionage with the Russian KGB double agent code named "Farewell." Is a Cold War story relevant in 2010? Yes, if it's done the way writer/director Christian Carion ("Joyeux Noël") has made this film with its themes of the loyalty of men in the trenches together and patriarchal sacrifice for the good of future generations. Featuring a stunning performance from Serbian director Emir Kusturica ("The Widow of Saint-Pierre") as Sergei Gregoriev, "Farewell" is a fascinating historical artifact, a tense thriller and, ultimately, a very moving character study. At their first meeting, Sergei is largely unseen, arrogant and intimidating and Pierre is happy when his part is over, but it seems the Russian likes the idea that the French engineer has no discernible ties - he's the perfect intermediary. At home, Pierre's wife Jessica (Alexandra Maria Lara, "Downfall," "Control") wants nothing to do with the dangerous work Pierre has taken on, so he begins to lie by omission. Sergei's wife Natasha (Ingeborga Dapkunaite, Hannibal Lecter's mom in "Hannibal Rising") and teenage son Igor (Evgenie Kharlanov), having always been lied to, are more upset to learn of dad's affair with Alina ("Cold Souls'" Dina Korzun), something tries to correct by rewooing his wife and plying Igor with Western gifts he gets from Pierre (the 'American band Keen' and a 'Johnny Walkman'). Carion propels Pierre and Sergei's story line in parallel with the goings on between Ronald Reagan (a miscast Fred Ward, "Feast of Love," "Management") and François Mitterrand (Philippe Magnan), whose Communist Cabinet Ministers give Reagan a good dose of heartburn. As Pierre grows to know Sergei more and more, he's taken by the man's humor, strong moral code and soul. Sergei quotes from his favorite poem, "The Death of the Wolf," and Pierre gifts him with a book of poetry that ultimately proves the missing link the KGB needs to connect them. The interplay between Canet and Kusturica is the heart of the film and it their growing relationship that pulls the noose around them. Carion tightens the screws using family tensions on both sides before ultimately racheting up the suspense when Sergei's brought in by the KGB and Pierre is warned to flee Russia. A montage of the double agents Sergei has listed being rounded up on U.S. soil is old school classic. Blink and you'll miss Diane Kruger ("Inglourious Basterds") as one of them in a scene straight out of "The Silence of the Lambs." There are several other bits of funky international casting here, including Willem Dafoe as Feeney, the C.I.A. operative who debriefs Pierre, "Starsky and Hutch's" David Soul and "Billy Elliot" dad Gary Lewis. "Farewell" charts the true story of the mission that essentially ended the Cold War and it is both terrifically entertaining and historically enlightening.

“Farewell” is unique. It is based on true events that began the death knell of the Soviet as Sergei, through Pierre (and only Pierre), funnels such information as Air Force One plans and deployment, US military movements, nuclear missiles locations and much more. Single-handed, Gregoriev may have really changed the world. The question, easily answered by the filmmakers, is: why did Sergei stay under the KGB spy radar for so long? I like the answer. Director Christian Carion, with Eric Raynaud, adapts Bonjour Farewell, by Serguei Kostine, and tells a spy tale that does not follow any conventions of the genre. Nearly all spies, the movies tell us, are motivated by one of two things – patriotism or greed. What makes “Farewell” an interesting not-told-before espionage flick is Sergei’s motivations, and Pierre’s for that matter, have nothing to do with either of money or loyalty. Eric Kusturica gives a soulful performance as likable Sergei who has his personable foibles – like an affair with an attractive KGB colleague, Alina (Dina Korzun), which his son, Igor (Evgeniy Kharlanov), easily and angrily figures out – but it is his honest, driving desire that the right thing must be done that anchors the character. The actor easily captures the intelligence of the man who is smart enough to elude KGB detection and form his own spy network to help the West. Guillaume Cadet is the clueless foil to Sergei and makes the unlikeliest of super spies. The story does a solid job in, separately, showing Gregoriev’s many sides – loving father, passionate lover, good husband, capable and savvy bureaucratic and cunning spy – then, the sides of Sergei begin to meld into each other as the espionage intrigue ramps up and danger looms. This is not a John LeCarre type of spy yarn but one steeped in real events that would, unlike the fantasy of spy novels, really change the world.