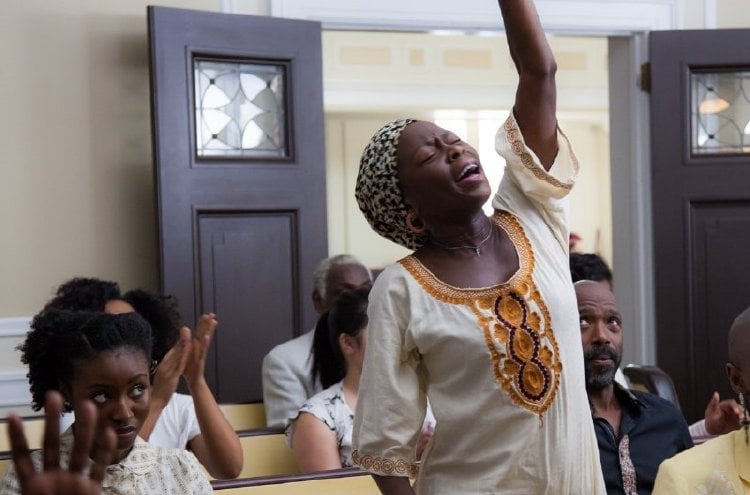 Writer/director Msangi doesn’t tell us immediately that Walter was living with a woman, instead beginning with the slightly awkward airport reunion of a husband and wife separated for so long they hardly know each other anymore, their daughter both clinging to the mother she knows in a foreign land and resenting her puritanical oppression.   It will be unexpected cultural changes that will surprise both Walter and Esther back in Brooklyn, she surprised at his ability to cook, he her fervent appeal to God to vanquish the devil before eating his meal.

Sylvia, clearly unimpressed with dad’s healthy but bland dinner, will not have to deal with language issues, but her privacy consists of a sheet drawn in front of the couch where she will sleep and her status as an immigrant will make her the butt of jokes, even among the Black kids at her new high school.  But DJ (Marcus Scribner, TV's 'Black-ish') notices something about her and persists in encouraging her to try out for a local dance competition.  Dance, something Esther regards as sinful, will also become a bridge between father and daughter.

Esther, who has remained faithful for 17 years, surprises Walter with her naked appearance in his bedroom.  She informs him that her pastor advised a familiarization both in mind and the flesh, but Walter, who flashes back to Linda moving out of his apartment, cannot perform.  The next day, Esther answers a knock at the door from Walter’s neighbor Nzingha (Joie Lee, "She's Gotta Have It"), who is surprised when she answers and hands her a packet of mail – addressed to a woman named Linda.

Msangi gives us each character’s point of view in his or her own chapter, beginning with Walter.  We see a man who is trying his best, who clearly honors his familial responsibilities, yet is having a hard time coming to terms with his separation from Linda, a woman we are surprised to learn supported his immigration efforts for his wife and child.  Ntare Guma Mbaho Mwine gives a quiet performance, his expression conveying both surprise and amusement at Esther’s religious enthusiasm and kind compassion for his daughter’s struggles.  His successful engagement of Sylvia in a doctor’s office is delightfully staged by both Msangi and her actors, yet we will see quite a different side of things in Sylvia’s chapter.

The teenager stays connected to her past through texting and the music pumping through her Bluetooth earphones while DJ helps her transition to her present.  Ironically, it is Esther who presents the biggest obstacle, scandalized when she finds her daughter in the unchaperoned presence of a boy.  And while she discovers dad is also a dancer, she recognizes the necklace worn by the nurse who sees her as the same as her mother’s.  Linda is also displeased Walter has arrived at her place of work.  Newcomer Lawson has a real breakthrough role here, her outward self-possession only broken by the sharp comments of the female dancer paired with her in competition.  Her ensuing solo performance against a clear favorite is something to see.

Esther’s chapter is the weakest.  Jah’s performance is fine, but her character is the most unyielding, her back story underwritten and her situation resolved too easily.   Joie Lee enlivens things considerably as the neighbor who understands the situation and helps Esther reconnect with her husband.

Msangi based her story on family history and personal experience and her use of cultural touchstones – food, music, dance - to indicate home divorced from geography works.  Intimate cinematography by Bruce Francis Cole not only keeps us focused on the characters, but emphasizes their forced physical closeness during a period of emotional tentativeness.  Msangi takes shortcuts to her happy resolution, Esther’s strongly held religious beliefs evaporating too quickly, but “Farewell Amor” ends on the right note.