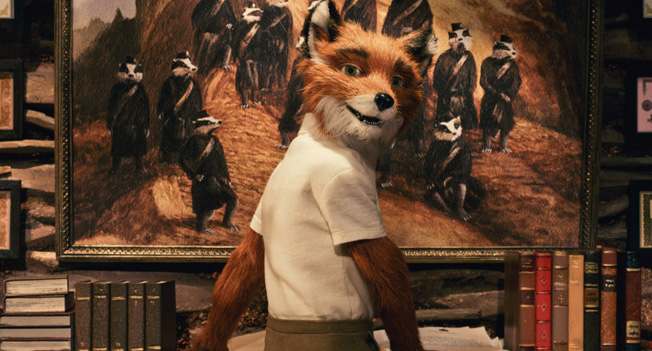 Mr. Fox (George Clooney) is a true wild thing, making nocturnal raids on the nearby farms to put food on the table for his family. Things change, though, when Mrs. Fox (Meryl Streep) breaks the news that she is pregnant with their first pup. Mr. Fox must end his chicken-stealing ways, buckle down, and be responsible. He does the good husband/father thing for two years (12 fox years) but his primal urges get the better of him and he secretly plans one last big raid in “Fantastic Mr. Fox.”

Since getting caught in a fox trap with his wife, Mr. Fox (voice of George Clooney) has sworn off stealing chickens, but like all good thieves he cannot resist one last big score when it presents itself in the form of Boggis, Bunce and Bean, three farmers whose abundance lies on the horizon of Foxy's new tree house. Along with opossum Kylie (voice of Wally Wolodarsky, "The Darjeeling Limited"), Foxy scores big but mean-tempered Bean fights back. With his wife and neighbors all not only furious but homeless, the now tailless animal proves once and for all why he is the "Fantastic Mr. Fox." Writer/director Wes Anderson ("Rushmore," "The Darjeeling Limited") adapts his favorite children's book (Roald Dahl, 'natch) in a unique and autumnal stop motion world that nevertheless is clearly the work of the man who created the Tennenbaums and the Life Aquatic. Anderson's Fox family, including visiting cousin Kristofferson (voice of Eric Anderson, the director's brother), has a sometimes maddening patriarch and a son, Ash (voice of Jason Schwartzman), who yearns to be an athlete. What sets "Mr. Fox" apart from the rest of the Anderson oeuvre, apart from the talking animals, is that Anderson's writing is glossed with some wry hardboiled noir and more than a few double entendres. The film begins with a landscape that is three-dimensional, but with little depth of field. Mr. Fox stands on the top of a hill, the theme from "Davey Crockett" playing from a cassette walkman clipped to his belt (a song that almost enables one to visualize Anderson's childhood bedroom). Then, after the trapping incident, we're propelled two years later (twelve in fox years a title card informs us) and Mr. Fox who 'used to steal birds, but now I'm a newspaperman,' is feeling unsuccessful living underground. Against the advice of his lawyer Badger (voice of Bill Murray), who warns him of the dangerous neighborhood, Foxy buys a spacious new place over land in a tree from realtor Stan Weasel (voice of Wes Anderson). Now, just as Mr. Fox is suavely pictured in short-sleeved shirt and pants, his true animal nature comes out when he eats his breakfast, like a beast until that final refined sip of coffee. And it is his animal nature that leads Mr. Fox to lie to his wife (voice of Meryl Streep) and coax his nephew Kristofferson into a life of crime. First up is Boggis's chicken farm, followed by Bunce's turkeys and finally Bean's hard cider, but once Foxy's larder is full, Bean (voice of Michael Gambon) shoots off his tail, then comes after the tree with bulldozers. As Fox and his friends dig deeper and deeper into the ground (shown in cross section like "Life Aquatic's" submarine), they think they can outfox the farmers, but they are sold out by a Rat (voice of "Antichrist's" Willem Dafoe). Meanwhile, rivals Ash and Kristofferson team up to retrieve Foxy's tail (and once he gets it back, Mrs. Fox announces her second pregnancy). Vocal performances are a delight. Clooney uses droll yet enervated deadpan while Streep has a sexy seriousness. Schwartzman perfectly captures the underdog teen while the director's brother gives his taller, yoga-practicing cousin a curious intellectual confidence. Wolodarsky's also fun as Foxy's none-too-bright partner in crime. Wilson and Murray are unmistakable, but both bring just what their characters call for. The film looks gorgeous, the creatures modelled with fur, their eyeballs occasionally replaced with spiralled or x'ed versions for cartoonish effect. The rural British countryside goes underground for noirish dripping pipes before resurfacing in that most modern of conveniences, a brightly lit supermarket, where Foxy's inner animal is once again tamed. A game of whack bat is like Anderson's own version of Quidditch, coached by former writing partner Owen Wilson in the guise of a furry white beast. Language is draped over these characters like their costumes, with the harder cored using the word 'cuss' as a literal bleep for another four letter word. British pop star Jarvis Cocker drops in as the banjo-playing Petey to sing a ditty about Fox's adventure and Alexander Desplat's score is the equivalent of 1950's cowboy wallpaper. "Fantastic Mr. Fox" is a retro hipster's take on a class children's book. It might satisfy the kiddies, but it's an adult audience who'll find Anderson's wacky subtext.

Wes Anderson and Noah Baumbach adapt Roald Dahl’s children’s book and helmer Wes does it in the most difficult and painstaking animation of them all – stop motion. Do not expect the marvelously terrific work of Nick Park, the creator of the Oscar-winning “Wallace and Gromit” animated shorts. “Fantastic Mr. Fox,” though, is still a must see for adult and older kids who can appreciate the creativity that Anderson and company lend to the telling of Dahl’s yarn. Mr. Fox accepts that his stealing days are over – he writes a newspaper column for the local, forest-critter readers - but he wants to go out with a bang, not a whimper. He schemes with his opossum friend Kylie (Wally Wolodarsky) and devises a three-part Master Plan to rob the trio of the most prosperous, and meanest, businessmen, Boggis (Robin Hurlstone), Bunce (Hugo Guinness) and Bean (Michael Gambon). The film, like the source material, introduces these meanies with a limerick: Boggis and Bunce and Bean, One short, one fat, one lean. These horrible crooks, so different in looks, were nonetheless equally mean. Mr. Fox is undeterred when the human ogres drive him and his family – Mom, their son Ash (Jason Schwartzman), and visiting cousin Kristofferson (Eric Anderson) - underground, without food. The three B’s, with Bean in command, plan to lay siege to the trapped fox family and starve them out. Unknown to the bad guys, other underground dwellers, who really know their business when it comes to tunneling, join the Fox family. They team up and, as the three B’s maintain their vigil, tunnel their way into the men’s ample stores. The battle of wits is a bit lopsided, showing that meanness makes you stupid and kindness and love make you smart (not a bad sentiment), and it all ends happily ever after. However, the getting there bears the unmistakable imprint of director Anderson. You can feel “A Life Aquatic” here, with similar quirkiness, but “Fantastic Mr. Fox” is a far superior and even movie. The characters are likable or, in the cases of Boggis, Bunce and Bean, despicable. Anderson and company took on a big, ambitious project and, mostly, succeed. The actors giving voice to the bevy of forest creatures and humans are well done and in character. Only George Clooney is noticeable as an actor reading his lines, albeit well. The source material is marvelous and the filmmakers’ adaptation does it justice. It is Wes Anderson’s best film since “Rushmore. There is little or nothing here for young children and some may be frightened. All the better for us big kids who can appreciate wit and artisanship.