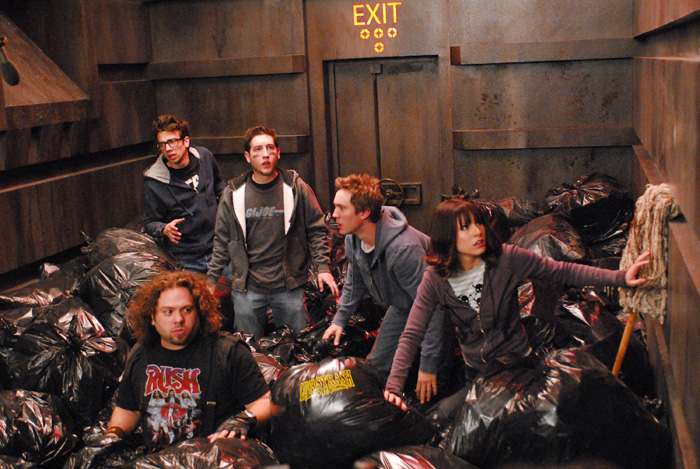 Many-years-long Star Wars fans Eric (Sam Huntington), Windows (Jay Baruchel) and Hutch (Dan Fogler) learn that their friend, Linus (Chris Marquette), does not have long to live, making it unlikely that he will see the much-anticipated, six months before its release “Star Wars ­ Episode One.” However, Linus has a plan that he has been working on since the fifth grade ­ break in to the high security Skywalker Ranch and, this time, steal a print of the movie. Since this may be Linus’s only chance, he and his friends pile into Hutch’s van and embark on a journey of the unexpected in “Fanboys.”

From the very beginning, “Fanboys” wears its Star Wars fandom right on its sleeve, visible to all, as the familiar scroll begins, “In a galaxy not so far, far away.” You know, right away, that you are dealing with passionate fans of the genre and the experience is amiable, goofy and fun. Things start on a serious note as Eric, a working stiff in his dad’s extensive car dealership, goes to a Halloween party where he knows his old, estranged pals will also be. The reunion has mixed results as Hutch and Windows welcome back their wayward friend who sold out to the man. Not so for Linus, who sees Eric’s distancing as abandonment of his friends ­ especially at Linus’s time of need. But, years of friendship, since they were kids, pushes their differences behind them. Linus, knowing he will not see “Episode One” when it opens, proposes his old plan. Windows, an internet geek, has a contact ­ his www girlfriend Rogue Leader. They all jump into Hutch’s beloved van and they set off on the 2000-mile trek to steal the movie. Their first stop is supposed to be Texas for a secret meeting with the Leader but Hutch makes a detour to Riverside, Iowa, the birthplace of James T. Kirk and revered ground for Trekkies (or, “Trekkers,” as they prefer to be called. Hutch’s plan is to taunt their anti-Star Wars foes and set back on their journey. This is just one of the amusing interludes that make “Fanboys” likable. The journey continues and the hijinks and pratfalls are liberally sprinkled along the way with cameos by Billy Dee Williams and Carrie Fisher (for obvious reasons) and Seth Rogen (wearing several character hats). Ethan Suplee makes an appearance as a kick-your-ass Harry Knowles for another funny interlude. Kristen Bell gives a solid perf as Zoe, always one of the “boys” since they were all kids and the one who saves their butts when they get in deep trouble. This road movie heads in predictable directions but with unpredictable results. “Fanboys” is, first, a flick for the many Star Wars fans out their. But, it is such a familiar subject for most of us; it has a drawer on a much broader level. Trekkers might not like it too much.