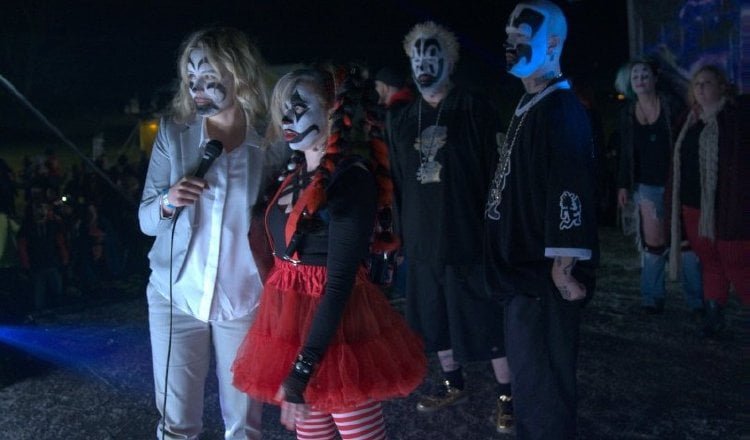 Kate (Taylor Schilling) is laser-focused on her fast-paced career so there is no time for anything, like a family, that diverts from that plan. That is, until her long-estranged brother calls for an emergency favor – take care of her teen niece, Maddie (Bryn Vale), for a night because she is “Family.”

Part workplace comedy, part buddy movie and all hilarious character study, writer/director Laura Steinel’s feature film debut is a comedic breakthrough for star Taylor Schilling (‘Orange Is the New Black,’ “The Overnight”) Her Kate Stone, a senior hedge fund executive, is so socially tone deaf she finds herself unwelcome at a company-wide baby shower. ‘Sarah chose to get pregnant, so she opted out,’ Kate tells her new analyst Erin (Jessie Ennis) after also regaling her with how she nabbed a big account when colleague Dan (Matt Walsh) did the unthinkable by taking some time off to deal with a serious family issue. Kate is that male movie cliché, the person who is so consumed by work, she has no time for family. This is made jaw-droppingly evident when Kate’s assistant Barb (Blair Beeken) informs her that her brother is on the phone. ‘Take a message,’ she replies. But Barb tells her Joe (Eric Edelstein) said is was so important, she was to come to his house when she left work. ‘Get his address,’ Kate replies. Joe informs his sister that his wife Cheryl’s (Allison Tolman) mother needs to be moved into hospice and they need someone to stay the night with Maddie. ‘Who?’ Kate responds. She then declines to stay with her 11-year-old niece until her brother essentially bullies and guilts her into it, she becoming more undone when she realizes she is to stay at his house. Half-heartedly listening to Cheryl’s instructions about foods Maddie needs to stay away from and her school and ballet schedules, Kate gets to work, leaving Maddie (Bryn Vale) to her own devices (mainly wearing a cape while jousting with tree limbs in the back yard). Then the overnight turns into a week in which Kate’s professional life unravels while her personal life unexpectedly blossoms, Maddie herself in miniature in more ways than one. Schilling has great comic timing, her deadpan responses to such information as having brought Maddie to the wrong school laugh out loud funny in their sheer inappropriateness. She’s also capable of parental style panic, such as when she learns the friend Maddie’s brought home is Baby Joker (Fabrizio Zacharee Guido), the sixteen year-old Juggalo Maddie befriended when Kate accidently left her at a gas station Kwik Mart. There is also warmth here, Kate empathizing with her niece when she learns the girl always leaves ballet for Sensei Pete’s (Brian Tyree Henry) karate school next door and advising her to use her killer back-kicks on the mean girls at school. Not everything works here. Kate is too business focused to get drunk at a lunch meeting the way she does here and no restaurant owner would berate a customer for ordering chicken parm for their child every night. But most of Steinel’s “Family” is an off kilter delight, from Kate’s utter disregard for the concerns of Joe’s neighbor Jill (Kate McKinnon) to the big finale at a Gathering of the Juggalos, the fans of rap duo Insane Clown Posse the perfect metaphor for this aunt and niece’s relationship to each other and the outside world. Grade:

You have seen this movie before. The premise, usually, is a career-focused, self-centered single guy, who is great at his cut-throat job but lacks people skills entirely, is called upon by his family for help. An urgent call from his brother-sister-father-mother forces the selfish man to put aside his career and pitch in with family – much against his will and caustic personality. He bonds with his ward and both change, for the better - the end. Yes, you have seen it before, but here we have a big difference – Taylor Schilling as the brash, socially-inept go-getter Kate in "the guy” role. The actress was a relative unknown to me so I just let her smart-clueless-self-centered character flow. She reminded me of Ellen Barkin in the 1991 Blake Edwards gender-reversing comedy, “Switch,” and Kate, to me, personifies that guy factor. The fish-out-of-water, deer-in-the-headlights challenge that Kate faces when confronted with the care and feeding of a moody 11-year old, even for a day, is amusing. Of course, in this situation comedy world, the day becomes a week and the challenge reaches huge proportions. Kate must become responsible for another and, in the process, grows into a better person. I have seen it before, many times, but Schilling actually makes it fresh.