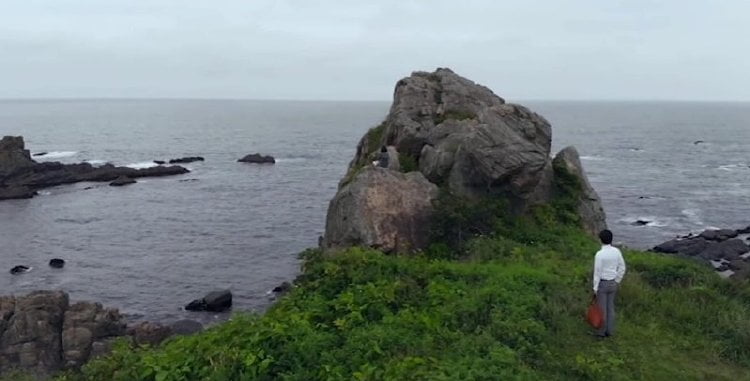 Ishii Yuichi (himself) waits on a bridge in Tokyo’s Yoyogi Park, watching as the same young girl wearing a horned hoodie passes back and forth.  He finally approaches the 12 year-old (Mahiro Tanimoto), asking if she’s Mahiro.  She shyly nods yes leading to a reunion with her estranged dad who will become part of her life over the coming weeks.  But Ishii isn’t really her father, instead being paid by her mother (Miki Fujimaki) to play the part.  Ishii owns a firm that rents out people to fill in as family members at weddings and pose as escorts at company functions.  It really exists and is called “Family Romance, LLC.”

When one of his Rogue Film School students, Roc Morin, told his mentor about this real phenomenon, he wasn’t ready to make his own feature film yet and so writer/director/cinematographer Werner Herzog stepped in, making Morin, who speaks some Japanese (Herzog speaks none), his producer.  Herzog decided to shoot his film like he would a documentary, but fictionalize it for ethical reasons – his main through line featuring Yuichi pretending to be a young girl’s father really happened, but Herzog didn’t want to be complicit in this lie.

And that is what he explores here in storylines funny, sad and borderline tragic, how social media has fueled human nature’s desire to present a more perfect (i.e., false) picture of ourselves to not only the outside world but even to ourselves.  It becomes clear that while some of Family Romance’s fakery and lies are harmless, those which deceive the recipient or are delivered to clients who get lost in illusions result in serious ethical and moral concerns.

Although Yuichi deals in fantasy, he’s surprised when he himself is lied to.  We see him with a bride’s mother (Kumi Manda) hiring him as a stand-in to walk her daughter (Yuka Watanabe) down the aisle because of her epileptic husband’s poor health.  The bride, giggling, whispers the truth – her dad is an alcoholic and, therefore, an embarrassment.

It is astonishing to watch all the different reasons Family Romance is hired.  A bullet train employee hires them to take his own browbeating for having messed up on the job (and his supervisor goes along with it!).  A woman who experienced the greatest thrill of her life winning the lottery needs to repeat the excitement.  Another hires a passel of fake paparazzi to follow her through a crowded district so she will ‘go viral’ and become famous.

We keep coming back to Mahiro, though, and Yuichi’s continued presence brings her out of her shell.  Then he discovers she’s lied to him about a photograph, wanting to appear more interesting.  He begins to offer parenting advice to her mother, who also hires him to accompany her on a trip to see an Oracle (Take Nakamura).  By the time he realizes his involvement has gone too far, the only solution is a drastic one.

Herzog creates a dream for Yuichi, one in which swordfighters he and Mahiro watched in a park commit seppuku without weapons and still actually die.  Illusion can be as dangerous as reality and with his last shot he cautions against getting lost in the former.