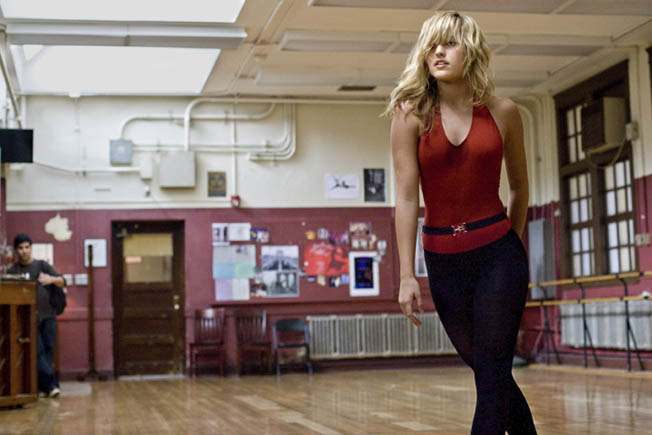 When Principal Simms (choreographer Debbie Allen of the original "Fame") addresses the Freshman class of New York City's Academy of the Performing Arts, she warns them that they are there to learn their craft, practice and maybe go a little wild now and then, but that they are in the wrong place if their priority is "Fame."

Screenwriter Allison Burnett (”Feast of Love,” “Untraceable”) adapts Christopher Gore’s original screenplay of the 1980 film, trotting out representatives of all the major arts in two tiers, but they're scrubbed pretty clean of the street that invested the original film. Still, despite cliched characters and parents straight from central casting, the performance numbers are executed by some pretty talented kids and Megan Mullally (TV's "Will and Grace") and Bebe Neuwirth (TV's "Frasier") are intriguing as the school's singing and dance instructors. Fans of the original film have been scoffing, but if you aren't wedded to or familiar with it, you might want to give this remake a shot. If 2009's "Fame" has a main character, it is Jenny (Kay Panabaker, "Nancy Drew"), a timid and mousy girl who ironically wants to become an actress (and whose resemblance to the young Melissa Gilbert is so strong you'll be thinking 'Half Pint' whenever she appears). She catches the eye of the good looking Marco (Asher Book), a singer/pianist who has performed in his father's restaurant since he was a kid and who seems to achieve everything effortlessly compared to Jenny's struggling stops and starts. Oddly Jenny makes Marco pursue her relentlessly before agreeing to go out with him. Denise (Naturi Naughton, Lil Kim in "Notorious") is a classical pianist who is not in love with what she's doing but whose father (Julius Tennon, "Screen Door Jesus," "Friday Night Lights") will not condone anything else. Angry young Black man Malik (Collins Pennie, "Prom Night") is an actor whose teacher Alvin Dowd (Charles S. Dutton, "American Violet," "The Express") works with to get to the core of his rage. Malik catches Denise belting out a pop song in a rehearsal room one day and persuades her to cut a hip hop track with his producing buddy Victor Taveras (Walter Perez, "August Evening") Malik's mom works three jobs and has been lied to about just where her son goes to school and Denise dare not tell her parents about her new venture. Kevin (Paul McGill, "Man on Wire's" dramatic reconstructions) is the son of an Iowa dance studio owner who dreams of big time ballet while his talent lags behind and Neil Baczynsky (Paul Iacono) thinks he's a budding Scorcese with a video camera (and no apparent film courses! - he just tags along in Dowd's class). Characters with a lesser storyline include singer/actress Joy (Anna Maria Perez de Tagle, TV's "Hannah Montana") and the phenomenal dancer Alice (Kherington Payne, TV's "So You Think You Can Dance") who is also Victor's love interest. Apparently Burnett didn't want to give these two too much screen time as both are successful enough to leave before graduation. It's a little perplexing why Jenny is so central, and even more so why she ends up in the middle of a tawdry love triangle (successful soap actor Andy Matthews (Cody Longo, "Bring It On: Fight to the Finish") tries to get her onto his casting couch), but Panabaker gives her a growth of confidence and maturity arc that makes her interesting. Book is also appealing and even though Panabaker seems outmatched by the looks of her love interests, the couple do have chemistry. The remainder of the young cast are far better in performance than just character, although Iacono brings a goofiness to Neil that, although dialed too high, makes one take notice. The parents are all cliches and Tennon is laughably bad, a hissable villain, but the school staff are above average. The 1980 edition's Debbie Allen is a real cheerleader of a principal. Dutton is a bit stoic, but Grammer brings a little slyness, some psychological game playing, to his teaching style. Neuwirth is a straight talking task master and looks great in a leotard. Best is Mullally, whose confident command shields a shakier personal history. She's funny, too, and does a terrific karaoke cover of "You Took Advantage of Me." Director Kevin Tancharoen (TV’s “Dancelife”) does an adequate job weaving story lines through four, chaptered years of high school, although he flubs the film's edgiest scene which is edited incoherently. Cinematographer Scott Kevan ("Hell Ride," "Death Race") frames the performances sensibly, so that you can see the dancers' hole bodies and the interrelated action on a stage. While a couple of the original film's songs remain, updates include Coldplay's "Try." The rejiggered title song is a bust, though. The musical numbers are more organically integrated here, except for one big over-choreographed hip hop number in a lunch room where everyone seems to have been given a preassigned part in what's supposed to be an instantaneous jam. A Halloween themed "Black & Gold" features interesting makeup and costume that look like talented teenagers could have created. The "Fame" remake may not all that deep nor even all that necessary, but it's a surprisingly easy sit. Just call it musical 'lite.'