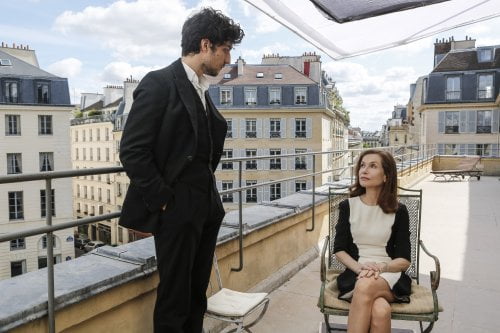 Madame Araminte (Isabelle Huppert) is a wealthy Parisian widow. Dorante (Louis Garrel) is a young man of good family but financially destitute. He and his former valet, Dubois (Yves Jacques), now in the employ of Madame, hatch a plot to get Dorante a job as her private secretary and make her fall in love with the younger man in “False Confessions.”

When his former master, Dorante (Louis Garrel, "Saint Laurent"), falls on hard times, Dubois (Yves Jacques, "Laurence Anyways") procures an interview for him with his new mistress, Araminte (Isabelle Huppert, "Elle"), hoping that she will fall for the smitten young man's charms. Araminte's mother Madame Argante (Bulle Ogier, "Venus Beauty") wishes her to marry Comte Dorimont (Jean-Pierre Malo) to settle a land dispute, but Araminte asks Dorante to look over the case to determine whether she can win it. Meanwhile Dorante's uncle Monsieur Rémy (Bernard Verley, "Lady Chatterley"), who happens to be Araminte's agent, thinks he should wed her lady's maid Marton (Manon Combes), leading to a series of "False Confessions." Director Luc Bondy filmed his adaptation of the 18th century play by Marivaux during the day while his stage production featuring the same cast ran in the evening. I cannot speak for the play, but his movie is tone deaf, a modern day reenactment of 18th century situations using 18th century language, neither time period informing the other. Casting creates initial confusion. So many characters are introduced so quickly, it takes a while to figure out that 34 year-old Garrel is pining for the three decades older Huppert, rather than the more age appropriate Combes. Production designer Aurore Vullierme divides rooms of a multi-storied luxury flat and theatrical spaces with hanging sheets, an amateurish melding of cinema and stage sets with no discernible point. Costume Design by Moidele Bickel ("The White Ribbon") is undistinguished. This ill advised project screams for the talents of Jacques Rivette, the late French filmmaker whose work often crossed the theatrical/cinematic divide. Not even Huppert can save this one. Grade:

Luc Bondy’s final film is based on the 1739 three-act play by Pierre de Marivaux that explores the use of deceit to garner love. The filmmakers have set this adaption in modern Paris, but with the language of the play, and a combination of the use of both set and theater stage to carry forward the story. My problem with “False Confessions” is that the shift from the 18th Century to modern times, but with that century’s formal and, to me, stilted (rather than nuanced) dialog, kept me at arm’s length, never involving me in the farce. Also, the social mores of the 1700s do not translate well to new millennium. The stage-bound nature of the film and its story, with exaggerated and dramatic flair of the supposed-to-be larger-than-life characters, just did not work, despite the talented cast.