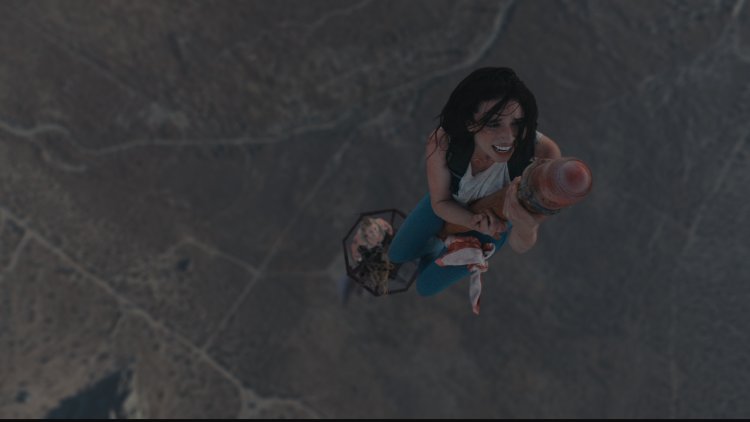 A year after her husband Dan (Mason Gooding, 2022's "Scream") was killed in a rock climbing accident, Becky (Grace Fulton, "Anabelle: Creation," "Shazam!") cannot shake off her grief, drowning her sorrows in alcohol.  Her dad (Jeffrey Dean Morgan, AMC's 'The Walking Dead') tries to pull her out of her depression with no luck so he turns to Becky’s best friend who was with them during the accident.  Hunter’s (Virginia Gardner, 2018's "Halloween") taken that time to travel, supporting herself as ‘Danger D,’ a livestreaming YouTube daredevil, and she convinces Becky to face her fears by climbing the remote and inoperative 2,049 ft. KXTV/KOVR Tower, the 4th tallest structure in the U.S., in “Fall.”

This is classic sweaty palm cinema, the type of amusement park ride that goes to increasingly ludicrous lengths to evoke a physical response from its audience.  It’s an effective thrill ride, if not a very good movie. If you are acrophobic and seeing this on an IMAX screen, I’d recommend a barf bag, as cinematographer MacGregor ("Vivarium") is very effective highlighting queasy perspectives.

If only cowriter (with Jonathan Frank)/director Scott Mann ("Heist," TV's 'The Oath') didn’t go to such ridiculous lengths to escalate a situation which is already beyond most’s imagining, beginning with Fulton’s overacting as a grief stricken widow.  Mann uses every trick in the book.  There is a near miss collision in the middle of nowhere, followed by a more sensible explanation for just how remote the tower with a road closure that forces the girls to walk the last couple of miles in blazing heat.  ‘Danger D,’ who wears a push-up bra for ‘titty clicks,’ records two vultures feasting on a still alive animal (can we say foreshadowing?).  When the girls reach the base of the tower, it soars so high into the sky we cannot see where it ends.  Becky balks, but another encouraging speech from Hunter gets them moving.  Distressed metal groans.  Rivets unscrew.  A metal ladder rung breaks.  Becky climbs past what looks like an abandoned nest, reminding us that it was the sudden appearance of a large bird from a rock face aerie that instigated Dan’s accident.

Becky begins to feel somewhat empowered as they reach the top, but when they emerge from the metal ‘cage’ that has encircled the ladder, whipping winds illustrate just how exposed their last two hundred feet to the platform at the top will be.  And Hunter isn’t content with having made it to the top, performing outrageous stunts for her drone camera, then insisting Becky follow suit.  Their antics overstress the structure, causing the ladder to crumble and tumble, leaving them stranded too far up for a cell phone signal (but apparently not too far up for vultures to fly, even though a light continues to operate to warn aircraft).  Not content with having his protagonists cook up several SOS attempts, Mann injects interpersonal drama into the proceedings.

Technically, the film is very convincing, the use of large format cameras exaggerating those stomach dropping views.  Mann and his editor know just when to switch from a downward perspective to a side angle view to relieve what at times become almost unbearable.  But at 107 minutes, the film goes on too long, piling on so many misadventures (and one ‘twist’ that has outworn its welcome) it casts any credulity to those howling winds.

About the only film I can think of that gives a similar visceral reaction to being way up high and in life-threatening danger is director Renny Harlan’s 1993 mountain climbing crime thriller, “Cliffhanger,” with Sylvester Stallone. That film did such a good job in building tension and fear – of heights, of falling, of failing, you pick which – it has big shoes to fill for the makers of “Fall.”

“Fall,” by director and co-writer Scott Mann, with Jonathan Frank, pairs down the fear of heights premise to a single, 2000+ foot radio tower in the middle of nowhere. Our heroines, Becky (Grace Caroline Currey) and Hannah (Virginia Gardner), were once close friends but, because of a tragedy 51 weeks before, have drifted apart.

Hunter has the idea that Becky needs to confront her demons and announces that they need – Becky needs – to climb the aforementioned radio tower. You know it is not going to go well as we are shown rust encrusted and loose nuts and bolts, rotted ladder rungs and a just not very safe place to be. The telegraphing of danger hits you over the head. But, this is a thriller and if people did not do obviously unsafe and stupid things, most action movies would not get made.

“Fall” hits the right buttons and gives us all the aerial chills and sweaty-palmed thrills I expect. And, they do it on a tiny budget and in IMAX. Not shabby.