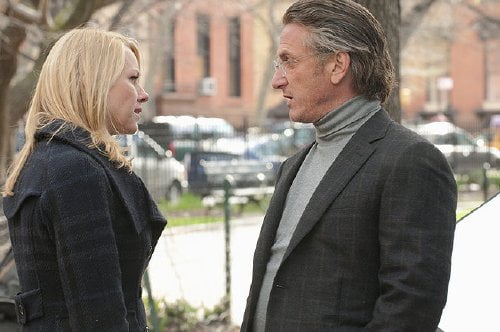 In 2003, Valerie Plame (Naomi Watts) was a high-ranking CIA spook asked by her superiors to recruit her husband, former ambassador Joseph Wilson (Sean Penn), to investigate the presence of Iraqi weapons of mass destruction. He traveled to Niger, Africa to find out if Saddam was importing “yellow cake” to make nuclear bombs, but Joe finds no sign and reports so to his bosses. However, the wheels turning at the highest levels of the Bush administration decide to not believe him and Joe publishes an op-ed article about his findings on WMDs. Bush officials decide to make him pay for his “disloyalty.” To punish him, Valerie’s secret identity as a CIA agent is blown in a syndicated New York Times column and she and Joe become “Fair Game.”

This does not paint a pretty picture of the upper levels of the George. W. Bush administration, including former Vice President Chaney. Director/cinematographer Doug Liman tells the true story about a hard-working CIA professional, Valerie Plame Wilson, who has clandestinely traveled the world to make things safer for America following the 9/11 attack. Her husband, Joe, a former ambassador, is trying none too successfully to start a consulting firm. So, when Valerie suggests to her superiors that he may be willing to investigate the WMD situation in Africa, Joe is offered the job. Wilson uses his familiarity with Africa and political contacts in Niger and, after some deep digging, finds that the nuclear materials threat to be a sham, returns home and makes his report. Meanwhile, Valerie plies her secret trade, using her cover as business exec to dupe their friends and give the illusion of a normal life. She makes a parallel investigation on the WMD issue, involving aluminum canisters, and concludes that there is no issue. With both wife and husband coming out against the government policy – Saddam is making nukes and needs to be stopped – they become, essentially, enemies of the state. “Fair Game” is about the brave fight the couple puts up against the daunting power of the Bush administration. Doug Liman is no stranger to action thrillers. Here, though, he concentrates on the intellectual thrill side of things, dealing with the events surrounding the Wilsons and WMDs. The script, by Jez Butterworth and John-Henry Butterworth, utilizes the Wilsons’ books as their focus, giving the film a liberal, David vs. Goliath spin. The real life couple, because of the truths they uncovered, was nearly destroyed by those in the government they pissed off. It is also about the abuse of power that our government can bring to bear on those who simply speak the truth - a truth, though, that goes against policy. Naomi Watts and Sean Penn are both outstanding as Valerie and Joe. Watts gives one of her best performances to date and Sean Penn is just a damn fine actor. There is a palpable chemistry between the characters as they must face the monolith of those government officials calling the shots. While Liman and company do not implicate former president Bush in the attempt to destroy the Wilsons or the cover up over WMDs – which, once the US failed to find evidence of nuclear weapons, expanded to include biological and chemical weapons – they do point to the vice-president and other high ranking Bush officials involved in the cover up. As expected, Doug Liman’s cinematographic eye makes for excellent lensing and the rest of the techs are all superior. Some will say that this id Liman’s best, yet. I will say that it is one of his best – do not forget “The Bourne Identity,” a truly fine action thriller. “Fair Game” is a step in the evolution of a fine filmmaker who knows how to tell a story.