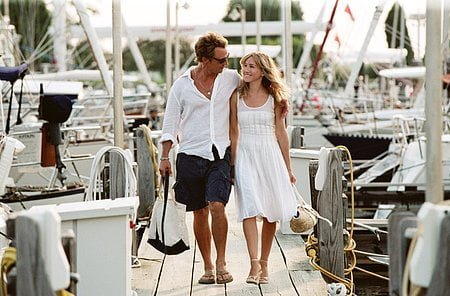 Trip (Matthew McConaughey, "Sahara," "Two for the Money") is a thirty-five year-old sailboat broker who believes in fun and avoids commitment by bringing women home to meet the folks - who Trip still happens to live with. His frustrated mom and dad, Sue (Kathy Bates, "Rumor Has It...") and Al (ex-Pittsburgh Steeler quarterback Terry Bradshaw) do something unconventional, hiring professional interventionist Paula (Sarah Jessica Parker, "The Family Stone") to pry their son away from the nest. Paula has what she believes is a foolproof system to fix the condition she calls "Failure to Launch."

Just why do major studio marketing departments continue to shoot themselves in the feet by releasing films with titles just screaming to be turned into the fodder of bad reviews and punning critics? A fine cast cannot save this awkward mess concocted by television writers Tom J. Astle and Matt Ember. "Failure to Launch" plays like "How to Lose a Guy in 10 Days" crossed with "Without a Paddle." Trip keeps company with two best buddies, slacker Demo (Bradley Cooper, "Wedding Crashers") and nerdy Ace (Justin Bartha, "National Treasure"), both of whom also live at home while his folks hang with a support group of equally afflicted parents. Once Paula enters the picture, though, even Demo and Ace think Trip's game is up as she puts him through her multiple step program. But once she includes herself in her support of his future endeavors, Trip surprises everyone by bringing her to meet the parents. Paula tries harder, breaking her cardinal rule of never sleeping with the client, but Trip eventually learns the truth and everything ends badly. Or does it? Of course these two have fallen in love, so family and friends connive to get them back together. Smashed on top of this typically forced comedy is a weird bit of fancy involving Trip's propensity for being attacked by thoroughly benign creatures like chipmunks, dolphins and vegetarian lizards. This is presumably because he is 'at odds with nature,' an uncooked idea which should be, but is not, linked to Paula's best friend Kit's (Zooey Deschanel, "Elf," "The Hitchhiker's Guide to the Galaxy") ongoing battle with a mockingbird. The film's few pleasures, like the aftermath of Kit's wild sex romp with Ace or Trip's dad relishing his newfound freedom by turning his son's room into a 'naked room' (and yes, Bradshaw shows his butt in a cute in-joke at McConaughey's bongo-playing expense), are all undone by the filmmakers' distasteful decisions to turn their lead into a prostitute and have her adorable roomie shoot at endangered species. McConaughey, once regarded as a promising actor, is turning into the king of the gimmicky romantic comedy ("The Wedding Planner," "How to Lose a Guy..."). He does display a laid back charm here and his chipmunk wrestling skills cannot be denied. There's even a modicum of chemistry with Jessica Parker, a leading lady the actor reportedly did not click with when the cameras stopped rolling. Jessica Parker, so good in "The Family Stone," is just slumming here, as is Deschanel who trots out her spacy weirdness to charming effect. In fact, we become more invested in Deschanel's reluctant bond with Bartha than we do in the main event. Bates and Bradshaw are entertaining as well, but director Tom Dey ("Shanghai Noon," "Showtime") has let them all down with this ill-conceived hybrid. Here, I'll just say it - "Failure to Launch" not only never achieves lift-off, it's left sputtering on its pad. This film has screwed its pooch.

Tripp (Matthew McConaughey) has it all. He’s thirty-something, handsome, educated and smart and has a great job as a luxury boat broker. But, there is something amiss with Tripp: he lives at home with his parents, Sue (Kathy Bates) and Al (Terry Bradshaw). They decide that the time has come for their son to leave the nest and hire Paula (Sarah Jessica Parker), a consultant who specializes in getting adult sons out of the house, in “Failure to Launch.” On paper “Failure to Launch” must have looked like a sure bet. Consider that Sarah Jessica Parker ended, not that long ago, a seven-year stint with the hugely popular “Sex in the City” and has brand appeal. Matthew McConaughey is People magazine’s Sexiest Man Alive and exudes charming personality. Oscar-winner Kathy Bates is always a plus to a film, as is Zooey Deschanel. Football fans will readily recognize Super Bowl legend Terry Bradshaw and Tripp’s buddies, played by Justin Bartha and Bradley Cooper, provide comic relief. And, a story about getting a son to fly on his own has got to be funny, right? Failure to Launch” is amusing – for about 30 minutes. This is the time it takes to set things up and develop the romantic chemistry between the leads, introduce the wacky friends and Tripp’s parents and have some fun. But, the premise that a 30+ year old should move out on his own and the plot cooked up by mom and dad runs out of steam at the half hour mark. The subsequent 67 minutes meanders to the inevitable conclusion: Tripp and Paula are made for each other. It’s not that “Failure” is a failure. The solid cast is a likable bunch and there are some funny moments. But, debuting screenwriters Tom J. Astle and Matt Ember took their premise and turned it into something more suited to a sitcom. (As a matter of fact, that could be a good idea.) I started to get bored at the 45-minute mark, checking the time frequently as jokes are beat to death. For example, to show that Tripp is not “in tune” with nature, he is attacked by such critters as a chipmunk, a dolphin and a lizard. If one biting animal is funny, then three or four more must be hilarious, right? Wrong. Everyone gives yeomen’s effort in trying to flesh out the two-dimensional character the script presents them. McConaughey is relaxed and self-assured in the role of Tripp – though the tragic reason for his continued living at home with ma and pa doesn’t make a lot of sense – and the actor has good screen presence. Parker is certainly more in her element here than she was as the uptight Manhattanite in last fall’s “The Family Stone.” Bates does her usual capable thing and Bradshaw is a very good sport. (You’ll know what I mean if you seed the movie.) Bartha and Cooper are both amusing as Tripp’s best buddies. It’s too bad they weren’t given more to work with. Techs are of good quality. The Annapolis Maryland location is a refreshing change from the southern Cal locales usually put to use for water born activities in films. Claudio Miranda’s lens work is well suited to the attractive stars. Production design and costume are typical for such mainstream fare and the look is appealing. Director Tom Dey also does yeoman’s work and is skillful in setting up the jokes but he, like the rest, is sold short by the screenplay. Failure to Launch” does just that.