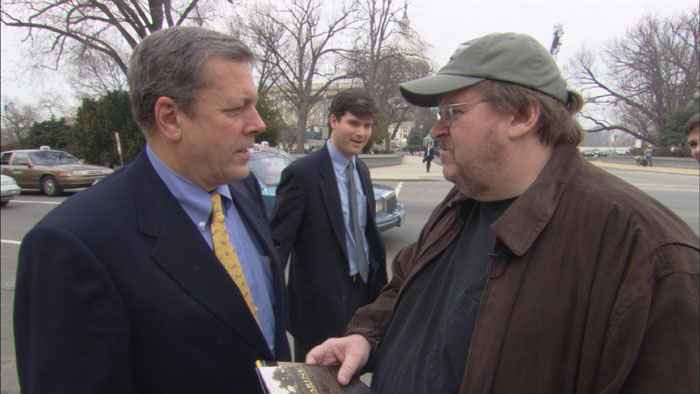 Michael Moore has always been a showy, in your face documentary maker from the very start with his scathing indictment against General Motors CEO Roger Smith and the corporate downsizing that destroyed Moore’s hometown of Flint, Michigan in 1989’s “Roger & Me.” He made an enormous splash, last year, with his anti-gun treatise, “Bowling for Columbine.” Now the documaker takes on the biggest CEO of all, President George W. Bush, in his controversial, Cannes Film Festival’s Palme D’Or award winner, “Fahrenheit 9/11.”

A Republican with well seeded connections stole a presidency. The Bush family and their close circle have close ties to the Saudis and oil interests. George W. Bush was a lousy businessman before becoming president. The Bin Laden family was rushed out of the country after 9/11. The Patriot Act makes freedom negotiable when dealing with potential terrorists. The Iraq War has nothing to do with hunting Al-Qaeda or terrorism. Young men fighting in dubious wars may exhibit barbaric behavior. Mothers who lose sons to war grieve. Brittany Spears is not an intellectual. All of these things should be known by now to the American public, but filmmaker Michael Moore presents them with a magician's flourish in his anti-Bush screed, "Fahrenheit 9/11." The success of Michael Moore's film at the Cannes Film Festival may only be explained by the current popularity of Bush bashing and unpopularity of the Iraq War. While his presence in his latest effort is more restrained and less obnoxious than in his Oscar winning "Bowling for Columbine," his mocking tone and savvy media manipulation remain - as does his scattershot approach. Moore serves up maybe two to three interesting tidbits in 120 minutes and does a thorough job tying the Bush family to the Saudis, but his film loses focus in its second half when he turns his sites on the Iraq War. Moore opens with a swift reflection on the most contested presidential election in U.S. history, ending with an astonishing bit ignored by the American media - the near riot and assault on the presidential limo on Bush's inauguration day. A quick recap of the president's first days in office paints a picture of a man who took a lot of vacation and ignored warning signs of a terrorist attack. Then, lifting the technique of "21 Grams" director Alejandro Gonzalez Inarritu's segment of the "September 11" omnibus, the horrors of the day are heard over a black screen. (Moore has been praised repeatedly for this approach with very few references to Inarritu's initial authorship). The now infamous 7-9 minutes of presidential inaction in a Florida schoolroom would have been more effective had Moore not deigned to give voice to Bush's possible thoughts. Then Moore gets conspiratorial with his audience, using the old "Dragnet" TV series to point out how obviously stupid it was to hustle the bin Laden family out of the country without even questioning them - the only problem here is that he condescends to his audience at the same time - how much public protest was there about this at the time? Moore's best work is how he puts the Bushes in bed with the Saudis. He's quick on his feet when, conducting an interview across the street from the Saudi Embassy in D.C. he's questioned by the Secret Service. 'Does the Secret Service usually protect foreign embassies?' asks Moore. He then ruminates on why Bush was so slow to go after Osama in Afghanistan by tying in the little known visit to Houston by a Taliban leader over an oil pipeline deal (this was only reported by the UK press). Moore does a side by side comparison of the discharge doc from the National Guard he obtained in 2000 with one released by the White House in 2004 - the 2004 doc obscures the name of George's fellow officer, Major James R. Bath, who became the Texas money manager for the Bin Laden family. (An amusing cheap shot - when highlights George W.'s name, it is accompanied by a few bars of Eric Clapton's "Cocaine.") Yet, Moore ignores the Saudi tie-in when he addresses the war in Iraq and begins to veer all over the map, from the economy in his hometown of Flint, the subject of his first film fifteen years ago, to how the Bush Government got the American people to buy into a military attack by using fear tactics, the factor he pointed to in his last film "Bowling for Columbine." (Shouldn't the incidence of gun violence have increased dramatically since 9/11 then?) The media is also blamed in a montage using such snippets as Katey Couric proclaiming 'Navy Seals rock!,' a sentiment that has nothing to do with being pro-war. The dubious behavior of many of the young men and women fighting in Iraq is somewhat balanced by sympathy for their predicament, but when Moore shows a Christmas Eve raid of a Baghdad home, it is all about the terrorized women inside and not at all about why the man they are searching for is wanted. An aside addressing the lapses and transgressions of Homeland Security questions question why passengers are allowed to bring butane lighters and matches on flights after the shoe-bomber incident by implying that the tobacco industry is behind it, but not a shred of evidence that this is the case is produced. The success of Moore's tactics is evidenced when he attempts to question congressmen and the lawmakers and their staffs scatter like frightened pigeons on the DC sidewalks, but he clearly considers the 'gotcha' entertainment factor with higher priority than backing up many of his statements. Moore would, in fact, have us believe that Baghdad under Hussein was a utopia of children in playgrounds and happy, smiling people everywhere before the U.S. moved in. "Fahrenheit 9/11" certainly contains a message or two worth listening to, and his very last Bush sound bite is a hilarious kicker, but this barrage of fist-pumping propaganda should not be mistaken for a well made film.