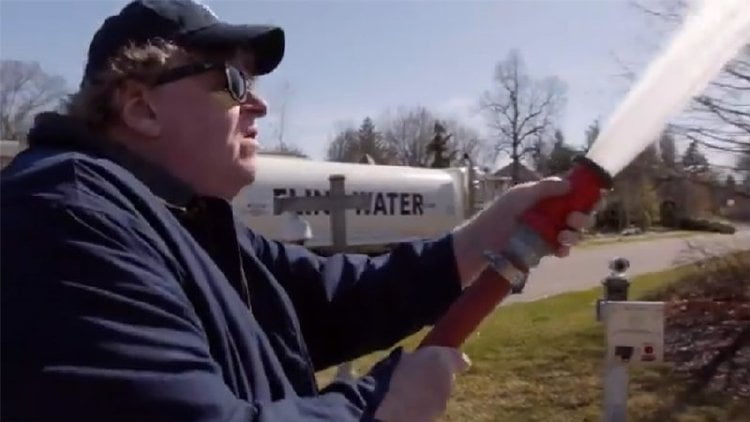 Early in the evening on 9 November 2016, a huge crowd gathered in a convention center where they happily chanted, “Hillary! Hillary!” Then, hours later, the country learned that the glass ceiling remained intact and Donald Trump was elected the 45th President of the United States. Michael Moore discusses events before and after that election as we prepare for the next in “Fahrenheit 11/9.”

In 2004, documentarian activist Michael Moore pasted the George W. Bush presidency to the wall with his "Fahrenheit 9/11" in his usual scattershot and manipulative way. Everyone expected his new film to do the same to the Trump presidency, but while it does indeed go there initially, Moore is more interested in examining how a corrupted political system, including the Democratic Party, led to it, concluding that Progressive left activists are the way out of "Fahrenheit 11/9." Moore begins with the 2016 optimism that we would be seeing our first female president. 'Was it all a dream?' he asks before throwing some demonic music on the soundtrack to hit us with reality. 'How the f*&$ did this happen?' he asks as Donald J. Trump's image lights up the Empire State Building in red white and blue. Moore's theory is that Trump only threw his hat in the ring as a negotiating ploy with NBC, upset that Gwen Stefani had received more money on 'The Voice' than he made for 'The Apprentice.' He certainly is right that the group that took the stage after his win was announced didn't appear to be happy about it. It is a depressing start, to be sure, our country held hostage by reality TV, but after aligning Trump with unsavory media figures and admitting his own brushes with the Trump family (Jared's a fan!), the filmmaker quickly moves on. It may no longer dominate the news, but Michael Moore is still mad as hell about what happened to his hometown Flint, Michigan's water supply and he reminds us why we should be too. Laying out the sequence of events that caused an entire city to be knowingly poisoned while corporate interests were served is a smart and bracing tactic for illustrating the corruption of American democracy. Moore rightly excoriates Michigan Governor Rick Snyder, whose appointing of emergency managers targeted poorer, minority cities and created a free-for-all for his self-serving appointees, but he also takes aim at Barack Obama for 'wetting his lips' on a glass of Flint water during a presidential visit with no mention of the Republican obstructionism which hamstrung Obama's effort to send federal aid. Still, the footage stings. Moore's spraying of Flint water at Snyder's Governor's 'mansion,' however, lacks bite. You'll also be stung if you were pro-Hillary and anti-Bernie, as Moore suggests the Democratic Party's undemocratic way of assigning its delegates disillusioned a lot of Sanders supporters, making them feel like their vote no longer counted. It is hard to argue as we witness every county in West Virginia going for Sanders (he won 51% of the popular vote to Clinton's 36%) but the delegates being given to Clinton at the Democratic convention. Moore is clearly in favor of carrying Bernie's revolution forward and this is the primary thrust of his documentary as seen in his focus on New York's surprise Democratic congressional primary winner Alexandria Ocasio-Cortez and Michigan's Rashida Tlaib. But Moore's primary message is that it is up to us ordinary citizens to turn things around, and not just in the voting booth. He shows how West Virginia teachers' refusal to back down on their strike demands not only turned things around for them but inspired other states to do the same. He also spends time with the Parkland Student activists whose efforts are already making significant changes. Michael Moore may still be guilty of presenting facts to fit his agenda and ricocheting his way around to his point, but "Fahrenheit 11/9" is more cogent than some of his prior efforts. More importantly, it is an effective call to arms. Grade:

You can always tell a Michael Moore documentary and not just because we see his big mug throughout all of his films. He is always preachy about his subject matter and gives facts and figures to back up his bombastic rhetoric. And, his stunts to make his many points get attention, whether by the public or, more importantly, by the government and business officials he lambastes. With “Fahrenheit 11/9,” he is preaching to the choir, once again, for those us who faithfully watch his documentaries and agree with (most of) his views. Much of the information he conveys is well known to anyone who pays attention to the state of our country and the world. What Michael Moore does so well is to expound upon what we already know and give us the sordid details, as with the Flint, Michigan water scandal. As expected, Donald Trump is the number one subject of “Fahrenheit 11/9” and we get the expected litany and list of the president’s failings, foibles and disasters he has initiated. Moore, though a fan of former President Obama, also shows us his bad decisions and policies, like drone strikes, bad choices and his response to the Flint Water Crisis (he did not really drink the water). Sometimes, as with “Sicko,” Moore’s pulpit is used to hit the viewer repeatedly over the head with how bad America’s social and economic policies are when compared to other democratic countries. By the end of his pontificating, I usually have had enough. But, “Fahrenheit 11/9” treats the viewer like a kindred spirit, rather than ignorant student, and takes all the stuff we know and fleshes it out with nuance and scrutiny. I know that I am one of those kindred spirits and appreciate all of Moore’s Herculean efforts to bring out truth and expose the lies of those who supposed to be are there to protect and lead us into the future. The future is here and, unless we act, now, it does not look good. Vote on 11/9!