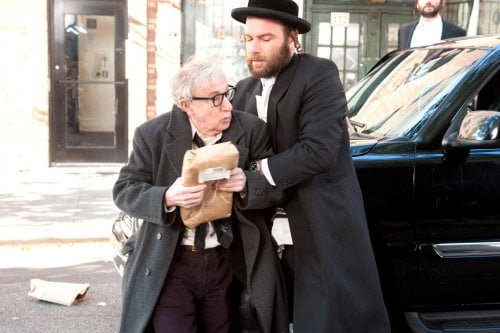 There is a “going out of business” sign in Murray’s (Woody Allen) rare book store window. He really needs money, so when his dermatologist, Dr. Parker (Sharon Stone), asks if he knows anyone interested in having a ménage a trios, he tells her “sure,” but it will cost a thousand dollars. He cuts a deal with his best friend, Fioravante (John Turturro), who reluctantly agrees to be the “Fading Gigolo.”

Middle aged Fioravante (John Turturro) has worked part time at Murray Schwartz's (Woody Allen) rare and used book store since Murray caught him trying to break in as a kid. When Murray's forced to close he offers his old friend a strange proposition - his dermatologist, Dr. Parker (Sharon Stone, "Lovelace"), had confided an interest in trying a ménage à trois - and Murray thinks Fioravante would be a natural because of his soulful way with women. Fioravante's taken aback, but his financial situation is dire and so he accepts, but when Murray engages him with Orthodox Chasidic widow Avigal (Vanessa Paradis, "Girl on the Bridge"), his former clients find he's a "Fading Gigolo." Writer/director John Turturro ("Passione") has crafted a unique comedy, one with undertones of melancholy and yearning, that both pays homage to Woody Allen and gives him one of his most enjoyable roles in years. Allen's at his most relaxed with crack timing that had me laughing out loud while his director, in a much quieter turn, is a surprisingly sexy, tender 'ho.' Turturro walks a fine line between comedy and drama here and it's an artful mix, Parker's vulnerability offset by her friend Selima's (Sofía Vergara, TV's 'Modern Family') uninhibitedness, Avigal's touching response to forbidden pleasures countered with Murray's kidnapping by an outraged Chasidic court. Fioravante begins his new gig with a singular date with Dr. Parker and he arrives bearing his own carefully crafted Japanese orchid arrangement. Conversation is stilted until he gently insists on a slow dance. She's so rapturous Selima wants in on the action and it's ramped up. Meanwhile Murray has to deal with his kids' lice infestation and so he visits Avigal and, noting her loneliness, gets an idea. When she's picked up, hair uncovered in modern dress, Dovi (Liev Schreiber, "Goon," "Lee Daniels' The Butler"), a Shomrim member (the Orthodox community police) who's been pining from afar, takes note. The comedy also extends to Murray's biracial family (note the names), a raucous, loving group in cramped quarters. When his wife Othella (Tonya Pinkins, TV's 'All My Children') calls him as he's being kidnapped, her protective fury is amusingly formidable ('I'll pull a Michael Corleone on you'). Murray may be a schemer, but he's a lovable one with good if self-serving intentions ('She tipped you?') and the sight of Allen being carted off by the Chasidic 'law' is priceless. Cinematographer Marco Pontecorvo ("Letters to Juliet") shoots Murray squeezed in the middle of a back seat dwarfed, just as Fioravante (now professionally dubbed Virgil) is caught entering Selima's by her foregrounded, sky-high heeled legs. Turturro's comic edits may not always be subtle (a man hosing down a sidewalk follows Virgil's three-way) but they're constantly amusing (the Virgin Mary on a cabbie's dash gives way to Avigal in his back seat). Paradis, in her English language debut, has never been better, conveying as she does here the plight of a woman whose upright marriage to a Rebbe was devoid of affection and whose place in her community enshrines and imprisons her. Her scenes with Turturro are emotionally intimate. Also touching is Schrieber, whose proper behavior may cost him his one true love. "Fading Gigolo's" dialogue, situations and jazz soundtrack all scream Woody Allen, but it's essential sweet sexiness is all Turturro. Grade: B+ The Blu-ray: The Blu-ray presents the film in its theatrical ratio and includes English and Spanish subtitles as well as the usual chapter search option in an easy-to-navigate menu. Previews include "Fading Gigolo's" trailer. The special features are a commentary track with director/star Turturro and his assistant, Cameron Bossert (who shot the film's opener among other things) and six Deleted and Alternate scenes. Turturro and Bossert share a number of anecdotes about shooting, like Woody Allen's aptitude for baseball, as well as influences like "Shampoo" and "Casablanca." Turturro has a lot of respect for Paradis, noting how she nailed several scenes during the first take and how she learned to sing in Italian for one of the film's tracks. We also discover that his dance with Sofia Vergara wasn't choreographed, but 'shot from the hip' and that the singer featured in the jazz club scene is a Tunisian singer from Naples featured in his "Passione" who translated 'I'm a Fool to Want You' into Arabic herself. "Fading Gigolo was in production during Hurricane Sandy and we hear how that impacted the film. One only wishes that the audio track of the movie itself was turned up when Turturro and Bossert aren't speaking, especially as they do remain silent, it's usually to comment upon the scene which just played. There are alternate takes on the movie's opening and the jazz club scene as well as a couple of outtakes with Woody Allen which show him as an easy going cheerleader on location. All in all, it's a nice, if not great package, in which the film itself is the star.

John Turturro brings his fifth effort as writer-director to the screen in a charming tale of a man who brings happiness to women. “Fading Gigolo” shows the influence of Turturro’s muse, Woody Allen, in a number of ways: use of music, title credits, use of camera. But, this is a good thing. It allows the writer-director to explore the emotions and needs of lonely women who want romance in their lives, not just sex. While Fioravante, business name Virgil, is the pivot for those around him, Turturro steps back a step and allows his co-stars to develop into real characters. Virgil is a strong, noble and caring man who understands what his clients want, one of whom tells him “You bring magic to a woman.” Turturro plays his character to perfect effect with lots of quiet charm. The story, with money-strapped Murray concocting his plan to be his friends pimp, dovetails as Virgil meets and romances his clients. Virgil is such a sensitive lover that he seems to anticipate the needs of a woman, even before she realizes them. How Virgil romances Dr. Parker and Selima (Sofia Vergara) in their ménage is totally different from his bringing back to life a sad young Hassidic widow, Avigal (Vanessa Paradis). The romances are quite touching and real feeling. The director is not always serious, though, and he calls upon Woody Allen to give one of the best Woody performances in years. He is comfortable as Murray and shows Woody the actor can still inhabit and bring to life a very funny character. You can almost see the wheels turning in Murray’s brain as he figures out how to make the desperately needed money from his best friend’s, uh, talents with women. Liev Schreiber adds both comedy and touching emotion as the head of the Hassidic neighborhood watch, Dovi. He suspects that Murray is up to something in his ‘hood and is doubly suspicious when Virgil begins helping Avigal to come out of her shell. Dovi, it seems, has harbored a deep love for the beautiful and fragile woman. Again, a very touching aspect to the film. In “Fading Gigolo” we romance, love, comedy (slapstick and other kinds), a terrific cast, good writing and assured direction. What’s not to like?