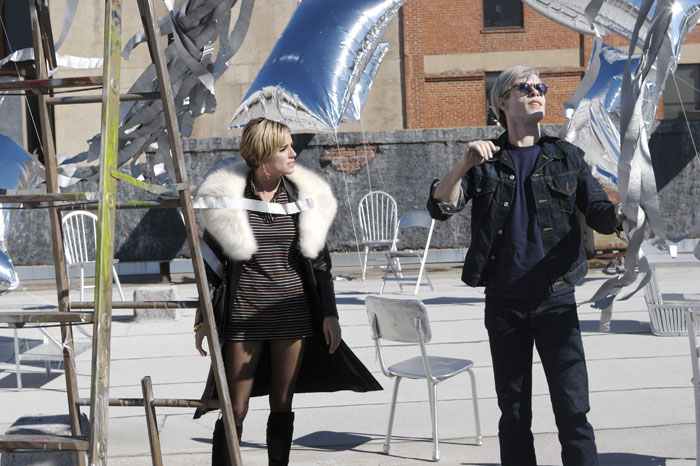 Determined to qualify for 2006 Oscars, Harvey Weinstein worked director George Hickenlooper ("Dogtown," "Mayor of the Sunset Strip") to the last second, ironically giving the film almost no chance of being seen in time for awards season. Too bad. If Harvey had punted the film into 2007, some of its actors may have been rewarded. The film itself is the usual sex and drugs and roll 'n roll trajectory, with Sedgwick's burnout so debt laden to Alex Cox's "Sid and Nancy" Edie actually calls for 'Syd!' from her room in the Chelsea Hotel. But what it does spectacularly well isn't so much Edie's story as it is the world of Warhol. Miller is as good as possible as the underground equivalent to the fashion world's Twiggy, but Guy Pearce is fabulous as Warhol, delivering a complex portrait of the pop artist as a bundle of contradictions. A brief prologue introduces Edie as a hopeful young artist in Cambridge, Massachusetts before she sets her sights on New York City. Good friend Syd Pepperman (Shawn Hatosy, "Alpha Dog") isn't sure that their gay buddy, Chuck Wein (SNLer Jimmy Fallon, "Fever Pitch"), is the right chaperone for the job and boy is he ever right. Chuck is the conduit to Warhol and when the adoring Sedgwick meets the awestruck Andy a mutual admiration society is fully formed. With the beautiful, fashion-forward Sedgwick on his arm, Andy's fame cravings are indulged in flash bulbs. But his circus-like studio, The Factory, wasn't just home to artistic expression. The drug culture blossomed there as well and Edie liked its highs, becoming perhaps the first face of heroin chic. And when Edie turns her sights towards rock star, Billy Quinn (Hayden Christensen, "Star Wars: Episode III - Revenge of the Sith," playing Bob Dylan in all but name), who doesn't 'get' Andy, Edie becomes lost in the middle, abandoned by Billy and shunned by Andy. Screenwriters Aaron Richard Golub and Captain Mauzner ("Wonderland") portray Sedgwick as the blue-blooded, messed up daughter of an aristocratic lineage (a Declaration of Independence signer on dad's side, Revolutionary-era developers of New York City on mom's) grown polluted. Dad 'Fuzzy' (James Naughton, "The Devil Wears Prada") is guilty of sexual abuse and the homophobic goading of his son's suicide. Mom Alice (a perfect Peggy Walton-Walker) is a tart enabler who charms Andy with her acidic observations. But things are even more interesting in the Warhola home, where Andy enshrines his beloved Polish Catholic mother Julia (Beth Grant, "Little Miss Sunshine," "Flags of Our Fathers"), who criticizes his blotchy skin but is thrilled to see him with a 'girlfriend.' And yes, once Billy's on the scene, Andy does something like pitch woo to win Edie back. The film reaches its apex when Andy and Billy go head to head. Christensen's Quinn has little use for Andy's film and Pearce is exquisite laying bare Warhol's deep seated insecurities when he cannot hide behind idolization. He's terrific too, in a pair of confessional scenes at first funny, then later truly perplexed with his inability to save Sedgwick. When unable to cope, walk away. A final interview scene on the day after Edie's death shows Pearce giving Andy a mask, distancing himself from the woman he once felt close to 'a certain kind of love' for. And so while Miller has the look and gets that clipped, smoky/phlegmy voice just right, she never makes Sedgwick as interesting as Pearce makes Warhol. Still, she's sympathetic, unlike Warhol's substitute. Meredith Ostrom ("Love, Actually," "The Great New Wonderful") plays Nico like the ultimate bored, too cool for school beauty and for every supporting player who gets it right (Fallon's opportunistic Wein, Edward Herrmann's ("The Cat's Meow") sympathetic money manager, Tara Summers' ("Alfie") Brigid Polk), there are those who aren't quite right (Christensen's Dylan, Illeana Douglas's ("Ghost World") Diana Vreeland). "Factory Girl" isn't as edgy or revelatory a biopic as it should have been, but Miller and particularly Pearce give it some juicy life.