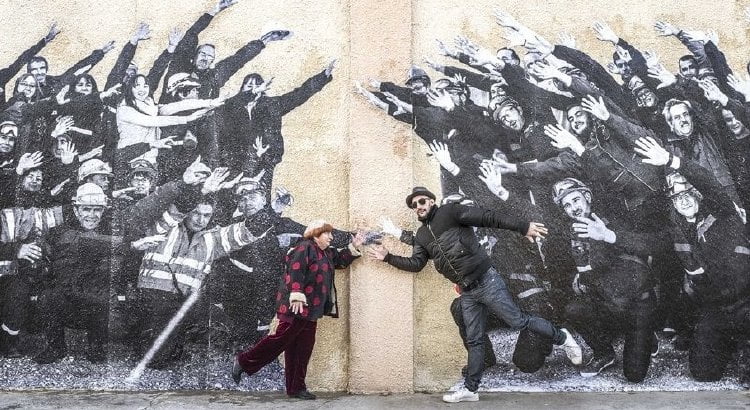 They did not meet on a country road, in a bakery or at a discotheque, as they so delightfully inform us in their Dr. Seussian opening minutes, but when 89 year-old French New Wave director Agnes Varda did meet 34 year-old French artist and large format photographer JR, they set off on a shared project with no plan other than to ride into the countryside and celebrate ordinary people in "Faces Places."

The most genuinely uplifting film of 2017 (and 2018 Oscar nominee for Best Documentary) is now available on a beautiful blu-ray with some great extra content from Cohen Media. If you missed it last year or even if you didn't, this is the rare documentary that one may find oneself going back to time and time again. Despite their 55 year age difference, Varda and JR are 2017's best cinema couple, their shared humanity and offbeat senses of humor making every moment spent with them a delight. Their sensibility is evident from the get go, charmingly animated opening credits honoring the 420 people who crowd funded their film (France's first and not without controversy as we'll learn in one of the disc's extras). But we also immediately learn of their one bone of contention - Agnes's distaste for JR's dark glasses, which she believes he hides himself behind. JR refuses to take them off and Agnes remembers an early film she made with Jean-Luc Godard, who JR reminds her of, in which she momentarily succeeded in getting him to remove his. They set off in JR's wonderful van, its body enveloped in a photograph of a 35mm camera. At their first stop, they convince people to pose in JR's photo booth with a baguette. By the time they leave, they've pasted up a giant mural composed of one long baguette held aloft by denizens of the town. They are more ambitious at their next stop, an old mining town where rows of miners' homes are slated for demolition. They meet Jeanine, the neighborhood's last holdout and listen as she describes her father's life in the mines. Using old photos, they paste multi-story images of these workers on the homes they once inhabited. Jeanine is rendered speechless when she leaves her house to see it emblazoned with her own image. The entire town is moved by their art, brought closer together as they are reminded of their own history. We will see this communion again and again in vastly different settings as Agnes and JR make friends with a farmer who works 2,000 acres with nothing but technology, a cheese maker who defies industry norms by refusing to burn off her goats' horns and an entire community plus passers by who join together in a project at an abandoned home site. Every place they leave is transformed in their wake. We often see Agnes and JR from behind as they sit and discuss what they've done and what they might do next. The two are playful together, bickering and teasing, JR telling one person who asks that they met on a dating site. They find so many shared experiences across decades, one bringing them to a favorite beach where an old German blockhouse has fallen off a cliff onto the beach. Agnes once took pictures here and one, of beloved friend Guy Bourdain, takes on new meaning by the way JR positions it on the blockhouse, its moving majesty fleeting as the wind and sea remove every trace of it. JR takes pictures of 'pieces' of Agnes, her eyes and toes later adorning the cars of a train. JR convinces Agnes that the docks of Le Havre are really a village and she comes up with a feminist slant for their last work, the wives of three dockworkers towering over the male domain on stacked shipping containers. Varda, who edited the film, weaves their personal lives into their public work with her appointment with her eye doctor (she has an eye ailment which blurs her vision) and their visit to JR's 100 year-old grandmother (the octogenarian tries to ally her against JR's glasses). Their last journey will be to visit Godard, who JR is keen to meet, but who cruelly disappoints Agnes with a cryptic message left scrawled in his doorway. But Godard's slight inspires JR's gift as he takes off his glasses for Agnes. We see him as she does - in a blur. "Faces Places" is a profoundly moving film that celebrates everyday life. JR's simple yet striking ideas combined with Varda's curiosity is a cinematic marriage for the ages. The blu-ray: The blu-ray features four extras in addition to the documentary's theatrical trailer. 'Chance is the Best Assistant: Agnes Varda and JR on Faces Places' is a 46 minute interview with the pair conducted by former MoMA film programmer Laurence Kardish. In addition to discussing aspects of the film, we learn a lot about how it was made, the two venturing out for one week every month for 18 months, their original idea of making a short film slowly expanding into feature length. They discuss how the people they met along the way become 'characters,' made memorable with enlarged photographs. As these individuals are reconsidered by their neighbors, 'you start a conversation' says JR. In under four minutes, 'Letters' shows us what went into a small segment of the film in which JR and Agnes recreate an eye chart with real people, all, we learn, friends of Agnes. 'Music' finds Agnes 'playing' a photographic guitar as she and JR visit with composer Matthieu Chedid ("The Triplets of Belleville"), whose original music is a perfect accompaniment to their film. When they leave, the walls of his home are adorned with a giant goat and fish. 'Cabin' showcases a second work at that Normandy beach, JR enlarging Agnes's 1950's photo to paste onto the side of a hut. Agnes has pebbles brought from the shore to blur the line between the photo's border and reality. Grade: A Robin: Robin gives "Faces Places" an

Director Gavin Hood and screenwriter Guy Hibbert have their hearts in the right place in this modern morality play set amidst the ongoing war on terror with its high tech surveillance drones seeing every detail of the terrorist targets and their bomb plotting. The urgency that builds as the plan to capture goes awry and becomes, at the fervent demands of Colonel Powell, a kill mission. At this point, early in the film, we meet little Alia (Aisha Takow) and her doting parents who, against Islamic law, allow the girl to play with her hula hoop and learn to read and write. Every day, Alia takes the bread her mother bakes and sells it in the street – right next to the terrorist hideout. This is where “Eye in the Sky” changes its focus from the bad guys, relegating them to the background, and closes in on Alia. The morality play kicks in as various members of the military and high ranking government officials question the right or wrong of endangering civilians, here in the guise of Alia, to take out terrorist bad guys. There is an absurdist quality to the story as the decision to strike goes up and down the political ladder as the buck is, almost comically, passed – no one who actually make the decision want to make it. Lots of closed door politics give this part of the story the feel of a drawing room comedy. This is punctuated with British General Benson (the late Alan Rickman) trying to get a doll for his daughter’s Christmas present, making me scratch my head in wonder. There are a lot of good actors doing their best with a story that hits you over the head with the moral issue centered on little Alia. The suspense over the danger to the girl is laid out very early on, telegraphing the plot’s intent over and over. At about the 30 minute mark I had the whole thing figured out and just waited for the inevitable ending, taking the suspense out of the suspense thriller.