Eyimofe (This Is My Desire) 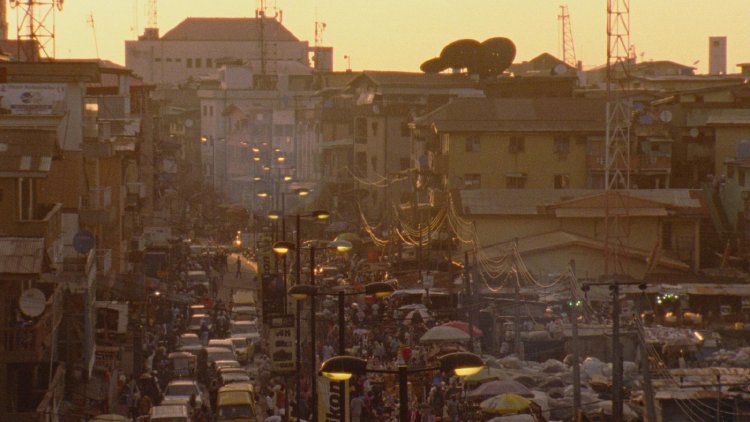 In Lagos, Nigeria, an electrician and a hairdresser are both working multiple jobs to save enough money for passports and visas to immigrate to Europe.   Rosa (Temiloluwa Ami-Williams) supports her pregnant younger sister Grace (Cynthia Ebijie), whose baby is the payment demanded by Mama Esther (Chioma “Chigul” Omeruah) to procure their visas.  Mofe (Jude Akuwudike, "Beasts of No Nation"), who lives with his sister and her two young children, has his passport in hand and almost enough money for his visa.  Both will be upended when life has other plans in “Eyimofe.”

Well deserving winners of Best First Feature at the 2020 Berlin Film Festival, twin directing brothers Arie and Chuko Esiri never saw a movie until they left Nigeria for school in England, both later earning film degrees in NYC.  Chuko, who wrote the screenplay, returned to Nigeria for National Youth Service and wanted to have a dialogue with his much changed home country.  Shooting on 16mm, the brothers have created a vibrant, neorealistic film from the perspectives of a loosely connected man and woman facing different cultural obstacles trying to leave the city which is the film’s third main character.  This impressive debut is one of the best films of the year, a moving portrait of how hope fuels survival.

The film is almost split down the middle, the first half telling Mofe’s story.  The frustrated electrician has been warning his dismissive female boss that the juncture boxes he’s been precariously patching are desperately in need of replacement.  But this kind Mr. Fix-It has a bounce in his step as he shows off his new ‘guaranteed authentic’ passport.  His joyous bubble is burst, however, when he returns home from work one morning to find the generator he’d just fixed with one of his nephews still running in their apartment, his sister and her two kids dead from its fumes.  Their deaths present one financial demand after another, so Mofe turns to his father in hopes of assistance.  Ironically, he’ll receive more help from his landlord, his father an opportunistic albatross.

Where Mofe’s world is one of drab painted cement walls, cluttered alleys and broken equipment, Rosa’s is a little cheerier, her work elevating her into posher surroundings, like the hotel bar where she meets Peter (Jacob Alexander), an American who takes a shine to her.  One phone call with mom indicates that parental help isn’t available and, also like Mofe, an unexpected death will upend Rosa’s plans.  But Mofe didn’t deal with gender and Rosa’s desperate situation has the unfortunate effect of painting her an opportunist in the well off American’s eyes leaving her with no other option than groveling to her repellent landlord.

The filmmakers allow scenes to unfold at a natural pace and from an observant distance, the characters’ surroundings adding nuance.  In one scene, the Esiris create an ‘upstairs downstairs’ situation on a boat, two Nigerian woman chatting on a sundeck as Peter’s friends tell him how he’ll be manipulated by Rosa.  In another, art direction and composition contrast dark grays with bright yellows as Mama Esther holds court, a creepy bust on a table giving her side eye.

At one point, Grace sits down at what is now Mofe’s street repair stand, noting he has their old refrigerator while he graciously adjusts a television for her to watch.  What is perhaps most remarkable about the Esiris’ debut is that despite their unrelenting stacking of Mofe and Rosa’s decks against them, there is hope in the humanity displayed by both.

Playdates and ticket information for "Eyimofe" can be viewed here.