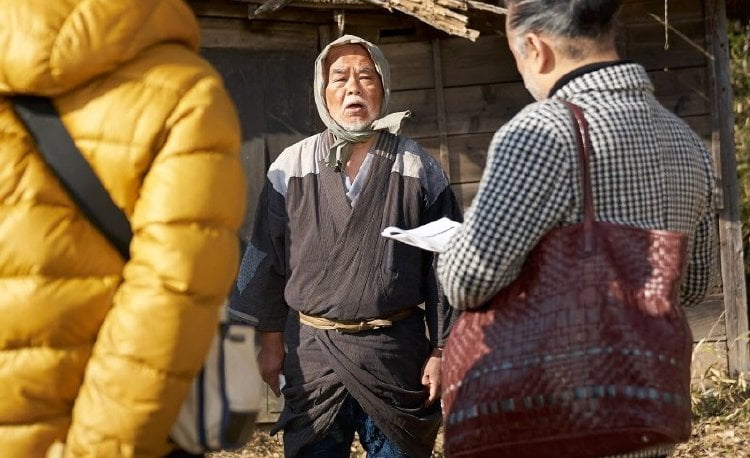 Thirty miles outside of Tokyo is Warp Station Edo, a facility for filming 17th century Japanese dramas.  This has given rise to the Lark Agency, a company specializing in finding extras.  One of their clients, 63 year-old former farmer and dental technician Kozo Haginoya, dreams of following in the footsteps of his favorite film star, Steve McQueen, by portraying a fireman, but he becomes a thorn in the side of those making the TV Samurai romance  'The Claws of Edo' in “Extro.”

By using a real film production facility and several Japanese stars playing themselves, writer Hirohito Goto and director Naoki Murahashi may just fool you into thinking you’re watching an actual documentary.  Take their opening moments, for example, in which "Hausu" director Nobuhiko Obayashi (who died earlier this year and whose last film, "Labyrinth of Cinema" is also featured in the Japan Society’s Japan Cuts 2020 festival) talks about how extras are extraordinary, creating a reality for the lead actors, and ‘Claws of Edo’ star Koji Yamamoto says ‘the film is incomplete without them.’

But this is a mockumentary, an affectionate and amusing send-up of the Japanese film industry in which a documentary crew ostensibly cover Haginoya, but veer off into all kinds of silly pursuits like profiling Lark’s PR manager Nadamine who has the habit of tripping when performing as an extra and following a mismatched pair of detectives who go undercover as extras to catch an incognito drug dealer.  (They don’t by the way, star Yuki Saito accomplishes that feat by getting him into a headlock while dressed as a geisha shooting a monkfish commercial.)

Some of the jokes may fly over the heads of Western audiences, like a bit where costume designer Kazuko Kurosawa, daughter of director Akira, is interviewed as ‘the comedienne,’ but fans of Japanese kaiju films will have a field day as Nadamine recounts her great moment in ‘Prehistoric Space Monster Gamogedorah.’  The star of that film, Yasufumi Terawaki, doesn’t even remember it, perhaps because it was never released (as will be ‘The Claws of Edo’s’ fate), Japanese actors apparently in the habit of causing scandal by singing drunk and naked in public.

‘Gamogedorah,’ we are told, was based on the legendary Ogamo, the Great Duck (a monk is interviewed to provide its history), and when the bird is spotted in footage of another film, a remake is born!

After causing all kinds of retakes during early goings in ‘Claws of Edo,’ Haginoya redeems himself in the eyes of Yamamoto with his perseverance singing and pounding straw all day while the director demands reshoots of his lead actors.  Told he’s gotten a mere second of screen time, Haginoya is quite happy, saying he’ll just rewind his bit.  The film ends on a hilarious note, Haginoya rewarded with his long dreamed for role in the ‘Gamogedorah’ remake, only to blow a climactic shot with his joyful laughter.  “Extro” is a sweet and funny homage to the big dreamers whose importance to the film industry is often overlooked.

Kozo Haginoya spends his days as a dental technician but his passion is for acting. To fulfill this burning need, he works as an extra in films and on TV. The camera follows the budding thespian to examine the life of an “Extro.”

This clever mockumentary by feature film newcomer, Naoki Murahashi, starts out with its focus on Kozo and a day in his life as a film extra. But, as the film unrolls, that focus shifts to the Lark Agency, the supplier of extras to the film and television industry. We get the story of several of these hard-working thespians and the he filmmakers have a lot of fun as the stories of the lives of extras are examined with tongue firmly in cheek.

As I watched the lives of these “extros” unfold, I found that I had a smile on my face for the entire run of the film. “Extro” may be a mock doc but it has the feel of a real one with its team of oddball characters, many stars in the Japanese film industry. I tried to think of other movies about extras and the only one I could come up with is “Memories of Me (1988)” with Alan King and Billy Crystal. I like “Extro” better.

“Extro” translates to “maestro” in English and this funny, charming little faux doc gives us reason to believe that is true.