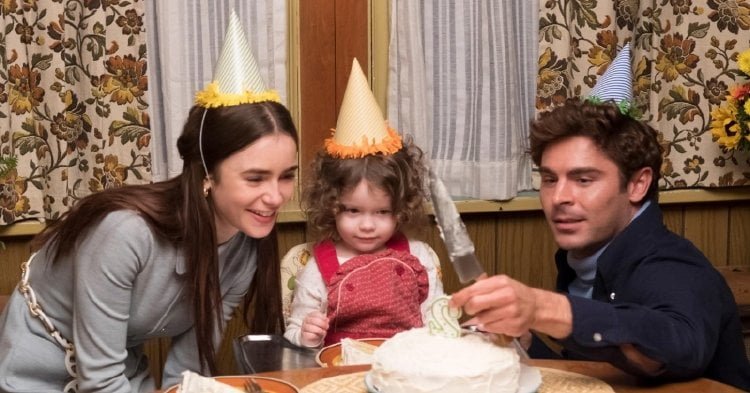 Theodore “Ted” Bundy” confessed to 30 homicides of young women during the 1970s and the number may have been much higher. The handsome and charismatic murderer convinced many of those around him, including his long-time girlfriend Elizabeth Kloepfer, that he was not “Extremely Wicked, Shockingly Evil and Vile.”

Do you ever wonder how the girlfriends and wives of serial killers could live with them throughout their crime sprees without suspicion? One of the 1970’s most notorious, the good looking law student Ted Bundy, lived with Liz Kendall (Lily Collins), a single mother, for six years, keeping in touch with her right up until his execution. She wrote a book under this pseudo name, adapted here by Michael Werwie. “Extremely Wicked, Shockingly Evil, and Vile,” the words of the Florida judge who sentenced him to death, is directed by “Paradise Lost” documentarian Joe Berlinger, following right on the heels of his Netflix series ‘Conversations with a Killer: The Ted Bundy Tapes.’ Berlinger and his ensemble, including the surprisingly well cast Zac Efron as Bundy, do a very good job illustrating how sociopathic charm can cast strong doubt even in the face of mounting circumstantial evidence. But the filmmakers leave out some of the more disturbing aspects of Kendall’s account, tilting the balance in their favor. (Not accounted for here - Liz finding the makings of Bundy’s fake cast in the back of their medicine cabinet, his penchant for sexual choke holds and an actual murder attempt.) And while Efron gives us a glimpse at the duality of his character, his ability to switch from charming warmth to cold focus, we never see him in the act of murder. The film is split into two parts, the first outlining Ted’s time with Liz, a witness composite sketch after the local Lake Sammamish slayings and his VW bug enough for Liz’s friend Joanna (HBO’s ‘Westworld’s’ Angela Sarafyan) if not for Liz herself. Her Ted is almost perfect, immediately accepting of her child, considerate to a fault around the house, his excuses when the law begins to sniff around quite plausible. The second half of the film features Ted’s arrest for a Utah kidnapping and murders farther afield (Utah, Colorado and eventually Florida). He finds another woman in former acquaintance Carole Anne Boone (Kaya Scodelario), who he would marry and father a child with while on trial for murder. By this time, Ted’s notoriety and media attention had garnered him groupies, Carole Anne one among many exploited for his defense. Meanwhile, back in Washington State, Liz is being comforted by co-worker Jerry (Haley Joel Osment) while Ted continues to write and call. Besides Efron’s startlingly realistic performance (real footage of Bundy during closing credits repeats scenes we’ve just seen), the most fascinating aspect of Berlinger’s film is to once again revisit just how often and how brazenly Bundy slipped out of the law’s clutch’s, including an escape by jumping out of a courthouse window. John Malkovich puts a droll spin on the Florida judge who condemned the man while also referring to him as ‘partner’ and telling him he held no animosity towards him. The film also stars “The Big Bang Theory’s” Jim Parsons as prosecutor Larry Simpson. Grade:

I have seen and read accounts of the Ted Bundy brutal murders, his seemingly impossible escapes from jail and prison, his arrests, trials, convictions and, finally, his execution in 1989. He broke the mold on what we think of as a “serial killer.” Normally, the likes of John Wayne Gacy or Ed Gein or Jeffrey Dahmer come to mind, not a good-looking, smooth-talking con man like Ted Bundy. Director Joe Berlinger and screenwriter Michael Werwie adapt the book by Elizabeth (Kloepfer) Kendall, The Phantom Prince: My Life with Ted Bundy, on her experience as the unknowing girlfriend of a serial killer through those deadly years. The filmmakers divide the story pretty neatly in two parts: the above about Liz’s life with Ted with all her doubts and suspicions and support for him; and, following Ted on his trail of heinous crimes to his final arrest, trial and execution. As I said, I have seen a lot of archive footage and interviews with Bundy. Zac Efron captures the man’s vehement declarations of innocence and charismatic character that actually makes you have doubts about his guilt. If there was ever a celebrity serial killer in America that garnered a legion of femme fan admirers, it was Ted Bundy.