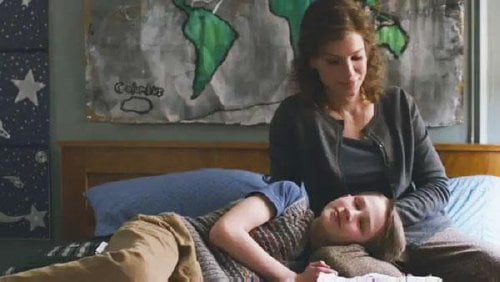 Nine-year old Oskar (Thomas Horn) lost his beloved dad (Tom Hanks) on what he calls “The Worst Day,” when the Twin Towers fell. Now, a year later, he finds a mysterious key in his father’s belonging and, convinced that it is a clue from dad, sets out across Manhattan in search of the lock that it fits in “Extremely Loud & Incredibly Close.”

Oskar Schell (Junior Jeopardy contestant Thomas Horn) is an only child living in Manhattan. He was tested for autism, but the results were inconclusive. Still, his intelligence is continually challenged by his jeweler father, Thomas (Tom Hanks), who engages the boy with word games, fantastical tales of a sixth borough and recon expeditions. After 'The Worst Day' which takes Oskar's dad away, the child finds a key hidden in his father's closet and makes it his mission to find its meaning in "Extremely Loud and Incredibly Close." Director Stephen Daldry ("The Hours," "The Reader"), who has been nominated for an Oscar for each of the first three films he's directed doesn't look to be as lucky here. Jonathan Safran Foer's novel received criticism for the whimsy he employed around his hero, Oskar, but I enjoyed the book's imaginative point of view. Daldry, however, directs this material in a way that emphasizes the book's contrivances and tries to employ show-offy flourishes in the worst possible way - one should not be hearing the director's voice in one's head as one watches Horn collapse on screen in tandem with the World Trade Center tower crumbling on a television beside him. Eric Roth's ("Forrest Gump," "Munich") adaptation jettisons the background of Oskar's grandparents in which Foer employed the Fire Bombing of Dresden as a parallel human tragedy to 9/11. While one can see why this would be necessary for the movie's run time, it turns the silent character of The Renter (Max von Sydow, "Shutter Island"), the old man who joins Oskar's journey, into an incomprehensible mime. There are exactly three moments in Daldry's film which work and Sandra Bullock owns them all. While Hanks does the expected job of sketching out the perfect dad in flashbacks, she has the emotional heavy lifting as her Linda Schell is now left to deal with a special kid who clearly idolized his father while drowning in her own grief. Bullock delivers, whether she's getting a rare admittance of love from her son from underneath a door or sagely, sadly agreeing when he tells her he wished it'd had been her in those towers. Her climatic cathartic reconnection with her son may be viewed by some as plot contrivance (again), but Bullock sells it nonetheless. The young Thomas Horn, however, is, frankly, annoying. Yes his Oskar is supposed to be a special child, one who panics at the thought of public transportation and who has a hard time talking to people, but as the central focus of a film dealing with grief he must also be sympathetic and Horn fails to engage. As his first interview subject (Oskar decides to visit every person in the New York phone directory who shares the name written on that key's envelope), Viola Davis's ("The Help") Abby Black is so obviously in personal crisis we're more concerned for her welfare than the strange child who's come a'calling, asking for iced coffee with half and half and a photo op. As her estranged husband, Jeffrey Wright ("Source Code") also finds a moment later in the film which pays more tribute to the boy's loss than the child actor can. Of course, the adaptation fails to correct the contrivance which finds Oskar finding his answer in the very first place - out of hundreds - that he looked with every other Black is relegated to montages in between. In a small role, Stephen Henderson ("Tower Heist's" doorman) does a fine job as Walt the Locksmith, exemplifying Oskar's whimsical mathematical mind process. Cinematographer Chris Menges has delivered a nice look for the film, which explores the real boroughs of New York with the occasional jolt of 9/11 imagery - a falling body in the stippled glass of a bathroom door, a plane bissecting a building in the background - but Alexandre Duplat's score relies on that fairy bell sound which screams precocious quirkiness.

Stephen Daldry has a penchant for directing novels-turned-screenplay with such successes as ”The Hours” and “The Reader.” “Extremely Loud & Incredibly Close,” adapted by Eric Roth from the popular novel by Jonathan Safran Foer, is about Oskar and his quest to unlock the secret lock left somewhere by his father, Thomas, before his untimely death. The youngster’s journey through the five boroughs of New York is wrought with metaphor as he touches the lives of those who, via the key, might have known his dad. I read the Foer novel not long ago and, of course, I readily compared “Extremely…” to its source material. One thing the book has going for it is its quirky main character, Oskar, whose Asperger Syndrome behavior repels or attracts those he meets in his lock and key quest. Thomas Horn as the big screen Oskar seems too normal for the character but that is my own prejudice from reading the novel. On the plus side is Max Von Sydow’s role as the Renter, who boards with Oskar’s grandma (Zoe Caldwell). The mute octogenarian communicates by note or by the “Yes” and “No” printed on his palm and Oskar suspects, as they track down clues across the city, that he is his grandfather. Sydow gives his character full dimension without speaking a word. The story is, essentially, a series of episodes as the young detective takes his clues, the key and the name “Black,” and goes from one far-flung residence to another, all whose inhabitants have that name. The many Blacks Oskar encounters include such notable actors as Viola Davis and Jeffrey Wright but, with so many characters, none, except for Davis, make an impact. My favorite thing about “Extremely Loud…” is a lovely performance by Sandra Bullock as Oskar’s mom. Her key scene, near the end, is touching, heart breaking and could have easily been over done. Bullock, though, gives her character nuance and the love for her son is palpable. Tom Hanks, seen in flashback as Oskar’s once very alive dad, gives a nice cameo performance. I think that I may have liked “Extremely Loud and Incredibly Close” more if I had not read the book first.