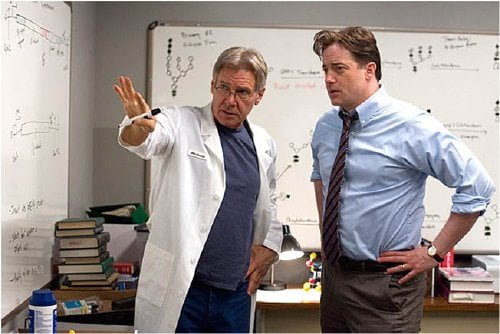 With not one, but two children afflicted with a rare genetic disorder, John (Brendan Fraser, "Journey to the Center of the Earth") and Aileen Crowley (Keri Russell, "Waitress," "August Rush") engage researcher Dr. Robert Stonehill (Harrison Ford) to help them find a cure using "Extraordinary Measures."

With not one, but two children afflicted with a rare genetic disorder, John (Brendan Fraser, "Journey to the Center of the Earth") and Aileen Crowley (Keri Russell, "Waitress," "August Rush") engage researcher Dr. Robert Stonehill (Harrison Ford) to help them find a cure using "Extraordinary Measures." Brendan Fraser has made his best films when paired with older actors - first there was "Gods and Monsters" with Ian McKellan, then there was "The Quiet American" with Michael Caine. Harrison Ford is not on those thesps' level and the formula is weakened by measure. Still, this true story is a compelling one and the characters are engaging even if director Tom Vaughan, who brought such nuance to "What Happens in Vegas," delivers by-the-numbers movie making and screenwriter Robert Nelson Jacobs ("The Shipping News," "The Water Horse") both over and under develops aspects of the story (taken from the book by Geeta Anand). Crowley was on the brink of a vice presidency at Bristol-Myers when he gambled - big - on the research of Bob Stonehill, an eccentric researcher frustrated by a lack of funding at the University of Nebraska. When the Crowleys failed to raise the 500K Stonehill needed, he proposed the two form a startup to reap the rewards of any drug Stonehill's research made possible. Already, this is a different twist on the disease-of-the-week movie. Instead of spending gobs of running time in hospitals, "Extraordinary Measures" finds its drama in two Davids up against the Goliaths of joint venture capitalists, big pharma, corporate politics and the FDA, and it works, mostly. There are some problems. The Crowleys; eight-year-old, Megan (Meredith Droeger), is a too-good-to-be-true Pompe victim, racing around in an electric wheelchair, often with scores of friends in two, always witty, always engaged. The couples' other two children, six-year-old Patrick (Diego Velazquez), also afflicted, and eldest John (Sam M. Hall), are completely overshadowed. Megan is the filmmakers' poster child and apparently they did not have the bandwidth to flesh any others out. In a similar vein, the Crowleys are only able to raise 91K initially, and yet they eventually move into an ocean cliff mansion. Sure, this is after Crowley sells out his and Stonehill's fledgling start-up to their biggest competitor, but when he loses that job, financial hardships, discussed at film's beginning, apparently no longer apply. Still, the main through line - Crowley's quest to get a drug developed that will save his children - is well done, right through the eleventh hour obstacle that is emotionally portrayed. Fraser is quite good as the determined dad. We feel his anguish, exhaustion and love for his children, or at least for Megan. Russell is solid support. Harrison Ford's usual crabby performance style is given a twist with the eccentricity of the character that makes it seem interesting. Here's a guy who lives among the detritus of an ex-wife, who plays The Grateful Dead and Deep Purple in his labs and who has advanced inter-personal problems. Jared Harris, recently of AMC's "Mad Men," is good as Crowley's biggest foe at Zymagen, the company where the duo eventually end, but Alan Ruck ("The Happening," "Ghost Town"), David Clennon, Courtney B. Vance ("Nothing But the Truth") and Dee Wallace ("E.T.," "The House of the Devil") are all under utilized. "Extraordinary Measures" is no "Lorenzo's Oil," but it's decidedly different take on the genre, and its admirable avoidance of overt heartstring-tugging, makes it worthwhile.