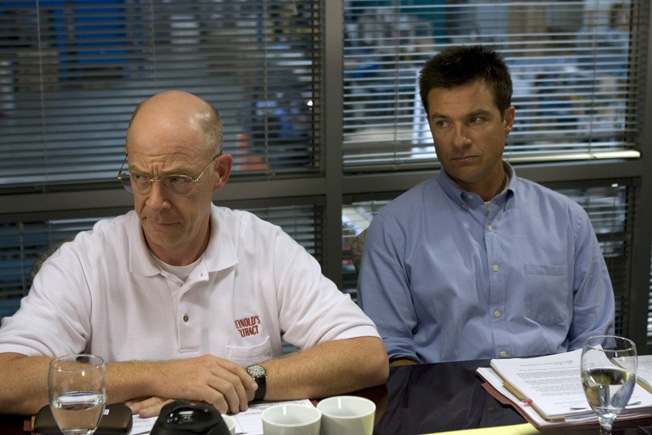 Joel (Jason Bateman) owns a small plant-extract company that is on the verge of buy out by a huge food conglomerate. However, things are not all that rosy for the guy. One of his employees is threatening a big lawsuit after a work-related accident, another is stealing wallets from the locker room and his wife may be having an affair with a gigolo in “Extract.”

Joel (Jason Bateman "Juno," "State of Play") is having a bit of a mid-life crisis. One of the workers in his factory has suffered a freak accident and a potential lawsuit is hanging over a deal to sell to General Mills. A new temp, Cindy (Mila Kunis, "Forgetting Sarah Marshall"), has him contemplating cheating on the wife, Suzie (Kristen Wiig, "Ghost Town," "Adventureland"), that he still loves but who's been shutting him down and his best friend Dean (Ben Affleck, "State of Play") mistakenly gives him some bad drugs before convincing him of a cockamamie scheme in "Extract." Writer/director Mike Judge seems to be going backwards as a filmmaker. His first live action movie, "Office Space," has become a cult classic. His second, "Idiocracy," didn't even get a theatrical release but was kind of amusing. Why "Extract" is being put into theaters, and by Miramax at that, is a complete mystery. Despite a talented cast (who appear to have been cast by playing six degrees of separation as many have crossed paths before in films such as "State of Play," "Forgetting Sarah Marshall" and even "The Messengers"), there is very little to smile, let alone laugh about, here. For a film titled "Extract," we learn little about the stuff other than that Joel, as a chemistry student, figured out what his mom's root beer extract needed to keep it from evaporating when baked into her cookies. His factory is staffed with a bunch of bitter losers who Joel nonetheless appears to feel loyal towards. Step (Clifton Collins Jr., "Sunshine Cleaning"), the guy who has the accident (he loses his testicles, although one is saved through surgery hardee har har), may be the exception, but he is also what lures con woman Cindy to Joel's plant. Meanwhile Dean thinks Joel should hire a gigolo to seduce Suzie so that he can embark upon an affair with Cindy guilt free. The only thing is, Brad (Dustin Milligan, "The Messengers"), the ostensible pool boy, can't stay away from Joel's wife and Joel realizes he doesn't like this one bit. As played by Dustin Milligan, Brad is so clueless he's kind of endearing. Veteran character player David Koechner ("The Goods: Live Hard, Sell Hard") makes an interesting character out of Joel and Suzie's incessant neighbor Nathan, but as directed by Judge, he's so overbearing the comedy's milked out of his scenes. As Joel's operations manager, J.K. Simmons ("Spider-Man," "Juno") is so cheerfully misanthropic he brightens the place up a bit, but only to be brought down by the likes of Beth Grant's ("Little Miss Sunshine," "All About Steve") whining Mary, T.J. Miller's ("Cloverfield") incompetent lunkhead Rory and Javier Gutiérrez's ("El Crimen Perfecto") sullen Hector. As Joel's best friend and former bartending colleague Dean, Ben Affleck looks like he hasn't showered in days (and the less said about Gene Simmons' appearance the better). Judge's worst crime, though, is turning the always interesting Bateman into a miserable drone. Poor Kristen Wiig is saddled with a character that isn't even supposed to be funny. Listen for the voice of Hank Hill coming out of a character identified as Jim on his work shirt. "Extract" is a dismal looking affair with flat sound. If it's title sounds like something that might happen in a dentist's office, that's about what sitting through it feels like.

I came from seeing “Extract” with the feeling that I lost two hours that I will never get back. This is a disappointing effort by writer-director Mike Judge that, on paper, may have been an amusing idea. In execution, though, it is not. Bateman’s Joel should be atop the world. He has a successful little company and General Mills has tendered a big offer to buy him out. But, he has disgruntled, selfish employees who have a petty thief in their midst stealing pocketbooks and wallets. His wife shows no interest in having sex with him. A sexy young thing, Cindy (Mila Kunis), has caught his eye but guilt keeps Joel from pursuing her. And, a freak accident at the plant puts the pending sale at risk. This is a lot of stuff that could be, but is not, funny. The talented cast – Jason Bateman, J.K. Simmons, Kristen Wiig, Ben Affleck, among others – is wasted with the ham-handed writing, poor comedic timing and unlikable characters. No one in this tome, except for one, evinces even the least sympathy. This is not a good thing for a comedy and this one fails to get more than a chuckle. The only character that garners any sort of warmth and humor is the young gigolo, Brad (Dustin Miller), who Joel hires to test his wife’s fidelity. The young actor steals the show whenever on the screen. Pretty Mila Kunis’s character, as con artist Cindy, seems tacked on to the bland story. Production values are on a par with the script, poorly done. Camera work is stilted, sound is tinny and the production look is simplistic. It is too late now for me to get the lost time back.