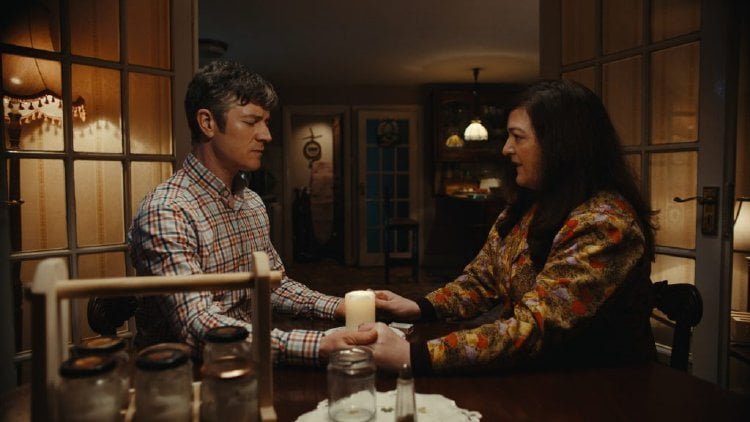 Most hauntings are so small, they go unnoticed Vincent Dooley (Risteárd Cooper) tells us on an old videotape of his television show on the supernatural.  Years later, his assistant and daughterRose Dooley (Maeve Higgins), convinced she was responsible for dad’s death at a haunted pothole, has rejected ‘The Talents’ her small Irish town’s citizens constantly ask her to deploy to assist them with their ghosts.  But when the driving instructor gets a call from Martin Martin (Barry Ward, "Jimmy's Hall"), his daughter Sarah’s (Emma Coleman) plight as the intended sacrificial virgin of a Satanic ritual plus Rose’s attraction to him (and his toasted sandwiches) encourage her to take on hauntings large and small in search of the ectoplasm needed to break Sarah’s spell in “Extra Ordinary.”

This supernatural romantic comedy is, in a word, adorable.  Much of that is due to the incredible charms of cowriter/star/Stephen Fry lookalike Maeve Higgins whose insecure and warm-hearted Rose is in a perpetual quest for romance and her next meal.

The square frame featuring dropouts that opens the film is a view into the series Rose once assisted dear old dad with (did you know that cheese could be possessed because of its biological properties, therefore causing weird nightmares if eaten before bedtime?).  But Rose wants none of that life now, dad’s study locked up tight, Rose continually disappointed when calls to her driving school tend to be about ghosts (Rose sees all manner of hauntings – in tree limbs, discarded appliances and trash bins as well as dead people – along her usual route).  We witness her at the end of one such day, discarding her pants in front of the fridge before indulging astride a yoga balance ball in her kitchen.

In the Martin household, teenaged Sarah has become fed up with a father ruled by the nagging ghost of his deceased wife Bonnie who burns the words ‘the dog has worms’ into his morning toast.  Sarah’s ultimatum pushes him to call Rose and he wangles an appointment by pretending he wants to learn to drive.

There is another, more notorious, household in this town, though, a palace inhabited by washed up rock star Christian aka ‘One Hit’ Winter (Will Forte), hoping to make a comeback with a Satanic assist.   Taking what his wife Claudia (Claudia O'Doherty) calls his ‘dick stick’ into town, he identifies a virgin in the local hardware store where Sarah is a clerk and where Rose has hidden out stalking Martin.  And when Winter learns just who Rose Dooley is, he, too, schedules a driving lesson under false pretenses – hilariously, turns out he really needs one.

Codirectors Mike Ahern (who also cowrote with Demian Fox and star Higgins) and Enda Loughman charm with low-key practical effects such as the animated electrical cord of an abandoned television or the lid of a trash bin in full tantrum.  Sarah’s mid-air suspension is milked for visual gags.  The cast is delightful.  This should be a major breakout role for Higgins outside of the UK, her lovable character and comic timing the film’s biggest asset.  Ward is called upon not only to play the henpecked widower, but the host of multiple ghosts, including his harpy of a deceased wife.  Who knows how Forte found his way into this small British indie, but he hams it up for all he’s worth (in a good way).  The film also features Terri Chandler as Rose’s heavily pregnant, more aggressive younger sister Sailor.

Horror comedies are a difficult subgenre to pull off, so just imagine how surprising it is to find one so well likable you want to envelop it in a great big hug.  Like Rose, “Extra Ordinary” is anything but – it’s extraordinary.

Rose (Maeve Higgins) is the proud proprietor of Rose's Driving School but she has another hidden and special talent – she can see and talk to ghosts. This leads Martin Martin (Barry Ward), a man dominated by the mean spirit of his dead wife, Bonnie, to seek out Rose's help not to learn to drive but to bring him peace in "Extra Ordinary."

I was not prepared for the sheer good natured charm that "Extra Ordinary" and its co-writer star Maeve Higgins exude in this based-on-a-true-story story told in two parallel parts. The part mentioned above, about Rose, Martin and Bonnie, is shadowed by Christian Winter (Will Forte), a one-hit wonder rock star who will stop at nothing to get back his fame, and his sister Claudia.

Christian's plan to regain his once-fame involves a satanic ritual and the sacrifice of a virgin, but his sister Claudia inadvertently killed the planned sacrificial virgin. Now, Christian needs a replacement and casts a spell on Martin's daughter, Sarah (Emma Coleman), putting her in a trance prior to the ritual that must take place the next day, during the eclipse of a blood moon..

Rose, who has stifled her supernatural skills to communicate and get rid of ghosts, must help Martin and Bonnie solve their marital problems AND save Sarah and stop Christian's nefarious plans. Co-directors (and co-writers with Higgins and Damian Fox) Mike Ahern and Enda Loughlin keep the story light and fast-paced and, due in a big part to the sweet and charming performance by star Higgins, eminently likable.

So, you have a ghost story, a possibly budding romance, an exorcism, a light comedy and just a load of fun.

"Extra Ordinary" is playing virtually at these theaters.