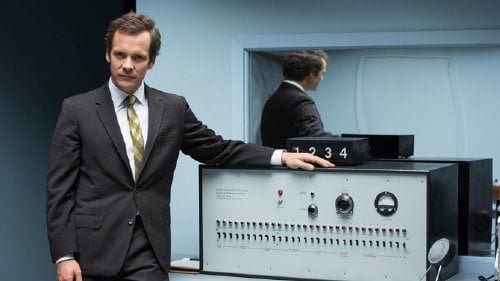 In July of 1961, Yale University psychologist Stanley Milgram began the first of his experiments on the obedience to authority figures. In the experiment, two volunteers were selected, one the teacher, the other the learner. The teacher would ask a series of word pairs and, for every incorrect answer from the unseen learner, the teacher would give increasingly severe electric shocks, taking orders from the “Experimenter.”

Social psychology professor Stanley Milgram (Peter Sarsgaard), the son of Eastern European parents, was deeply troubled by the Holocaust, so much so that he devised a study in 1961 at Yale University designed to measure people's compliance with authority figures. The results were shocking, but his methods so disturbed the study's participants, his reputation was forever smeared as a manipulative monster, an "Experimenter." Writer/director Michael Almereyda ("Nadja," 2000's "Hamlet") reappraises the groundbreaking work of Milgram with an experiment of his own, one which uses Milgram's voiced over ruminations, rear projection and literal elephants in the room to cast his narrative itself in the guise of a social experiment. Although the film is centered around Milgram's infamous obedience study, where people believed they were delivering electric shocks to a person in another room, Almereyda embraces all the man's insights into human behavior and how his marriage to former dancer Sasha Menkin (Winona Ryder) tempered his methods. With a parade of actors like Alton Yelchin, John Leguizamo, Taryn Manning and Anthony Edwards serving as Milgram's subjects, Almereyda recreates how Milgram set up his false 'teaching' experiment, James McDonough (Jim Gaffigan) always the hidden victim whose admonition about a minor heart condition preceded prerecorded pleads for mercy while the lab-coated John Williams (John Palladino) calmly instructed the subject to proceed. 65% of them went so far as to deliver fatal 'shocks.' The findings were particularly relevant in the aftermath of the Adolf Eichmann trial, but Milgram found himself in a trial of public perception. Almereyda recreates the TV movie 'The Tenth Level,' with "Twilight's" Kellan Lutz as William Shatner and Dennis Haysbert as Ossie Davis interacting with the man, who's later seen announcing the JFK assassination to a class who fail to believe him thinking they're being made part of another of his experiments. Sarsgaard's Milgram is a quiet, contemplative man, keen to every human interaction. He's seen augmenting the everyday in New York City, leaving 'lost' letters to observe people's willingness to send them on their way based on the addressee. Even meeting his future wife on their respective ways to the same party gives opportunity to observe elevator behavior. The actor's delivery is almost a monotone, a hypnotic effect on Almereyda's audience, yet he can be light and humorous as well, something we see with more frequency as he ages (with Sasha). The director's choice to frame social situations in obviously artificial environments may be distancing to some, but considering his subject, it makes perfect sense. Milgram was always searching for the cause of behavioral effect, a level of perception operating above the norm. "Experimenter" duly notes the negatives, but celebrates an important intellect. Grade:

If you asked the average bear if he or she would give possibly harmful electric shocks to a victim if ordered, nearly all would say “no, of course not!” Stanley Milgram, and many other researchers over the years, proved, though questioned by many experts, that most people would “follow the orders of a higher authority,” something claimed by Adolph Eichmann and many other Nazi war criminals. Writer/director Michael Almereyda makes the viewer think about what they would do if they were the teacher in Milgram’s experiment. Those depicting the teachers display increasing tension and anxiety as they are asked to inflict the electrical shocks on the learner despite muffled pleads to stop the experiment. While the film makes it appear that an overwhelming number of teachers would go all the way to 450 volts – the maximum level shock – the reality is that the majority of subjects in the experiment would go to the max, even while pleading the experimenter to stop. “Experimenter” is a psychological thriller in its own way as Milgram and his team, politely but firmly, instruct the teachers to continue. One might say that, if asked nicely enough but with enough authority, we can be manipulated to do things we would not, in normal life, do. That is a chilling thought and hope that I would be one to say “NO WAY!”.