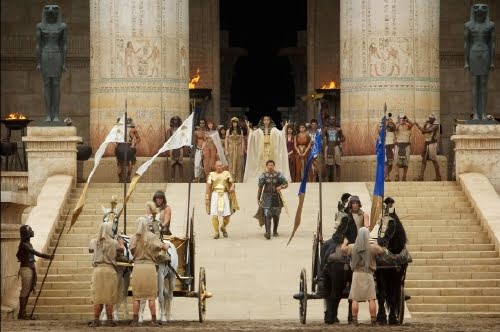 Moses (Christian Bale) and Ramses (Joel Edgerton) were raised as brothers in the rarified atmosphere of the Pharaoh’s palace. But, when Moses learns that his pampered life was a sham, he makes a journey of discovery that will turn him against his best friend, the future Pharaoh of Egypt, and lead his people to the Promised Land in “Exodus: Gods and Kings.”

1300 B.C. As he prepares to send his armies under the leadership of his son Ramses (Joel Edgerton, "Warrior") and his adopted nephew Moses (Christian Bale) to fight the Hittites, Egyptian Pharaoh Seti (John Turturro) gets a prophesy from his High Priestess (Indira Varma, "Bride & Prejudice," HBO's 'Rome') that a leader will be saved in battle and that savior will himself become a leader. That prediction will come true in ways Seti and his son would never foresee in "Exodus: Gods and Kings." Director Ridley Scott ("Blade Runner," "Prometheus") has taken on ancient epics with "Gladiator" and "Kingdom of Heaven," but his take on Moses leading the chosen people out of Egypt is riddled with weird inaccuracies, a Pharaoh sporting an Australian accent and a running time that feels excessive while the story itself feels truncated. Those who found Darren Aronofsky's "Noah" a bit on the balmy side may have similar reactions here as God is portrayed as a humorless, uncompassionate young boy (Isaac Andrews) and the ten plagues of Egypt feature crocodiles auditioning for "Jaws." Still, there's something to be said for Scott's dazzling production even if it features Abu Simbel and the Sphinx with its nose missing before their times, and Moses's conflicts with both Ramses and God are well articulated. After the death of Seti, Moses, who has bristled at the treatment of Egypt's 400,000 Hebrew slaves, is summoned by their elder Nun (Ben Kingsley), who informs him of his true heritage. Word reaches Ramses, who considers Moses a brother, via Hegep (Ben Mendelsohn, "Animal Kingdom"), and his mother Tuya (Sigourney Weaver), always jealous of her husband's favoritism towards the man, demands harsh action. Conflicted, Ramses banishes Moses and Queen Bithiah (Hiam Abbass, "The Visitor"), who adopted the boy as her own. After a difficult journey, Moses stops at a small goat herding village where he meets and marries Zipporah (Maria Valverde, "Cracks," stunningly made up with henna tattoos), promising that he will never leave her. Nine years later, Moses bucks tradition by traveling up a sacred mountain after straying sheep and is buried in a mud slide. He comes to to a burning bush and a young boy who tells him he must form an army to lead the slaves of Egypt to Canaan. Taking leave of Zipporah and his son Gershom, convinced he will never see his father again, Moses and his instantaneous army set off, but when they fail to achieve their tasks they must watch as Yahweh takes charge, raining down the ten plagues. Moses, distraught at what is befalling the people he grew up with, tries to warn Ramses to protect his son, but when the Angel of Death descends, taking the sons of Egypt, Ramses and Nefertari (Golshifteh Farahani, "The Patience Stone," "Rosewater") are not spared. Ramses, beaten, decrees that the Hebrews should leave. "Accepted's" Adam Cooper & Bill Collage, Jeffrey Caine ("The Constant Gardener") and Steven Zaillian ("Moneyball") turned to science to explain the plagues as well as the parting of the Red Sea, yet Scott still creates awe in their devastating execution. Bale portrays Moses as a man torn between two worlds, struggling with the demands placed upon him by his blood faith. Edgerton is astonishing looking as Ramses and plays the part well if not for that distracting accent, one he's managed to hide in other roles. Most of the supporting cast are relegated to mere cameos, particularly Aaron Paul's (AMC's 'Breaking Bad') Joshua, left largely to stare off into the distance, and Weaver's imperious, vampy Tuya. Hiam Abbass fares best making an impassioned plea for her adopted son. "Exodus: Gods and Kings" is a mammoth production, but one is left wishing for the finer details which enrich broad strokes. Perhaps like his "Kingdom of Heaven" there is a director's cut yet to be unleashed. Grade:

OK, a long time ago we visited Egypt and toured the country from the Great Pyramid and the Sphinx to the Temple of Luxor and Abu Simbel in the remote south of that country. It is a vast, mostly arid land with its many sites hundreds of miles apart. Which brings me to a point about “Exodus: Gods and Kings.” A Ridley Scott production with an estimated budget of $140,000,000 should be able to get geography, architecture and history correct, but they do not. I am not going to nit pick the details but I found the foibles of the film so distracting that I just wanted the overblown production to be over. The entire time I watched the (too long or too short?) “Exodus: Gods and Kings,” I felt a strong sense of artificiality in the production. Examining the movements of the background characters – slaves, soldiers, workers – I could almost hear the director’s calls of “Action!” and “Cut!” As the ponderous story of Moses unfolds, I did not get the sense of the telling of a biblical epic as much as I did that I was watching a manufactured construction that hit on points of history but without a coherent structure. Acting by all hands is perfunctory and without depth, particularly Joel Edgerton as Ramses II. The actor seems miscast and does not give the character any life. Christian Bale fares just a bit better as his Moses, at least, has a character arc. Such veteran actors as Sigourney Weaver, John Turturro, Ben Kingsley, Men Mendelsohn and Aaron Paul are wasted in almost nonexistent roles, although Mendelsohn does chew scenery well as the corrupt viceroy. “Exodus: Gods and Kings” is heavily laden with CGI special effects that, like the rest of the film, feel manufactured, not created with an artistic eye. When the big battle with the Hittites takes place early in the film, I noticed a complete lack of blood – we are talking people being run through with swords or hacked to death. I guessed, then, that the film would be rated PG13 and I was right. Ridley Scott’s “Exodus” is a big, bloated epic that fails on many levels.