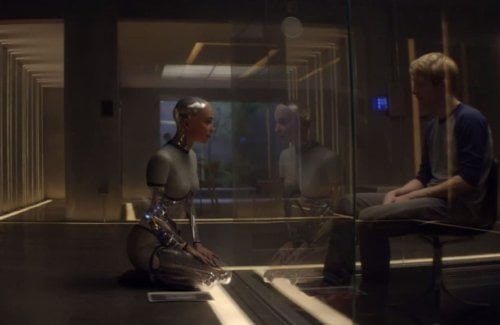 Caleb (Domhnall Gleeson) works for the world’s largest internet corporation and wins a contest with the first prize a week-long stay at the remote estate of the company’s solitary CEO, Nathan (Oscar Isaac). But, the young coder is not there for a vacation. What the technology mogul really wants is for him to perform a Turing test on a new piece of Artificial Intelligence. Caleb is not quite prepared for the surprise when the new software turns out to be a beautiful robot named Ava (Alicia Vikander) in “Ex Machina."

Caleb (Domhnall Gleeson, "Harry Potter's" Bill Weasley) is thrilled to learn he's won the opportunity to visit his brilliant boss Nathan (Oscar Isaac, "A Most Violent Year"), the creator of the Bluebook search engine, at his remote mountain home for a week. Once there, Nathan informs him he'll be applying the Turing Test to Ava (Alicia Vikander, "A Royal Affair"), the AI he's built in secret. But nothing is what it at first seems and Nathan's success could prove mankind's downfall in "Ex Machina." Writer/director Alex Garland (writer "28 Days Later...," "Never Let Me Go") makes his directorial debut with this slick looking sci-fi film where design trumps content. "Ex Machina" is a modern take on the old Frankenstein caution about man playing God. It's entertaining and cool as hell to look at but it doesn't hold a candle to Spike Jonze's "Her" for insights into man's relationship with artificial intelligence. For all its stunning locations, brilliant design and seamless visual effects, the story begs the question 'Is that all there is?' After fumbling to create a key card, its photo the driver's license version of befuddlement, Caleb lets himself into Nathan's stunning estate built into a natural rock formation with glass allowing nature inside (it's Norway's Juvet Landscape Hotel). The first thing he learns about Nathan is that the man has a hangover, one he's attempting to work off with exercise and antioxidants. Caleb assumes a party, but quickly learns that the only other person in the compound is Nathan's servant Kyoko (Sonoya Mizuno), a stunning woman who knows no English (and in fact never speaks). He's disoriented by his windowless room and unnerved when a brief power cut traps him inside it, but when he learns that his flatscreen TV is actually a monitor with which to view Ava, Caleb is distracted from his concerns. During his first meeting with Ava, conducted with a glass wall in between them, Caleb is entranced and reports his awe back to Nathan as they jostle with defining how to assess their test. But during the second session, Ava reveals that she is the source of the power cuts that confound her maker and takes advantage of the blackout to tell Caleb not to trust him. Caleb's sense of unease returns as Nathan's behavior, especially to Kyoko, disturbs him more and more. It's really not difficult to see where this is heading, but while it's a disappointment to land there the journey itself keeps things interesting. Ava is a marvel, a metallic skeleton encased in Lucite with a human face, hands and feet, her internal machinery whirring, her 'brain' like a Steuben crystal paperweight containing the cosmos. Vikander's contribution is also notable, her movements too perfect to be human, her composure still as her verbal sparring evokes emotion. Gleeson's post-Potter work has been showcasing more and more range, from his sweaty security tech in "Dredd" to his endearing "About Time" romantic lead and "Calvary's" creepy cannibalistic serial killer and he keeps us invested here as the innocent on a battlefield not of his making. But Nathan is an underwritten character, a man whose actions seem to be made because they can rather than from any motivating factor and Isaac, with a shaven head and full beard, can't seem to find anything to bring to the role other than arrogant bullying. The production is faultless, Rob Hardy's ("Boy A," "Shadow Dancer") cinematography playing up reflective surfaces, the score by Portishead's Geoff Barrow and Ben Salisbury reflecting both the film's genre and its natural, mountainous surroundings. Garland maintains suspense, to a point, but the filmmaker appears to have focused more on his visuals than his screenwriting. In the end, "Ex Machina" plays like a gussied up B movie, a sci-fi thriller that looks more cerebral than it actually is. Grade:

Writer and first time director Alex Garland debuts with a new and different look at AI and what the future might hold. When Caleb learns of his good fortune, his workmates congratulate him and he heads off to what could be the time of his life. He just does not know what that time holds in store. Once the introductions with Nathan are done, the mogul lays down the guidelines that Caleb must follow – he must sign a non-disclosure agreement if he wants to stay – and points out what is off limits and what is not. Nathan’s vast underground “home” is really a research center where he is taking AI to a new level. Caleb was purposely selected for to be the guinea pig in the Turing test – a human subject tests to see if a machine exhibits human or human-like behavior. When he meets Ava, he is immediately taken by her intelligence (and sexy robot body that reminds of Maria in Fritz Lang’s “Metropolis (1927)) in their daily sessions under the watchful eye of Nathan. This makes for a well-thought out cat and mouse game, keeping you guessing who is the cat and who is the mouse. Of the three key characters, Alicia Vikander fares best as the beautiful, smart Ava. You root for her in getting her wish to “people watch” with Caleb on the outside, making for an interesting twist in the plot. The always good Domhnal Gleeson shows his talent as the naïve programmer thrust into a mysterious, often frightening situation. Oscar Isaac’s Nathan is more enigmatic and it is harder to read his character who never garners sympathy. Production is first rate, with the vast underground kingdom of Nathan a labyrinth of glass walls that separate Caleb from Ava during their daily sessions. The best thing about “Ex Machina” is the robotic depiction of Ava, a sleek humanoid that exudes sex appeal – especially her CCTV striptease for Caleb. Alex Garland has created an original look into Artificial Intelligence and its potential and begs the question: if man creates robots that are smarter and stronger than himself, what is to stop these superior creations from making mankind extinct? Good question.