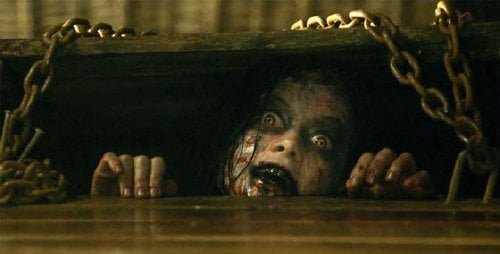 When David (Shiloh Fernandez, "Red Riding Hood") finally shows up at his family's old cabin in the woods, his friends Eric (Lou Taylor Pucci, "Thumbsucker") and Olivia (Jessica Lucas, "Cloverfield") are annoyed that he's late. They're the ones who got his younger sister Mia (Jane Levy, "Fun Size," TV's 'Suburgatory') through her most recent OD and they think another will kill her, so they inform David they cannot let her leave until she's gone cold turkey. But there are signs of a break in and a look in the basement reveals something horrible happened here. Eric cannot resist opening the package wrapped in barbed wire found downstairs, and, of course, reading the words someone's adamantly warned against. When Mia insists they leave this place, everyone assumes it's withdrawal, but they are about to meet "Evil Dead."

I always say you have to watch 100 horror films to find a good one. This is the good one. The fact that it's a remake makes it even more remarkable. With the exception of Werner Herzog's "Nosferatu the Vampyre," this may be the best remake of a horror film and is certainly head and shoulders over any recent do-overs, too many of which have bowed to the more commercial PG-13 rating. The attention writer/director Fede Alvarez got from his 2009 short "Panic Attack!" (you can watch it here) led him to Sam Raimi, the director of the 1981 original, and when Alvarez pitched his ideas for this remake, Raimi got behind the project as a producer even as Raimi plots his third sequel. The two aligning concepts may eventually merge in a future film. Alvarez shows the goods right out of the gate with a fakeout prologue that sets the stage. Our sympathies are with a young girl, seemingly being viciously persecuted by her own inbred family in some kind of misguided witchhunt. They're smarter than they look. The run down cabin will be familiar not only from the first film, but from the recent "Cabin in the Woods" which spoofed it, and when the gang sets to cleaning it up, the foreshadowing starts as David takes a nail gun to a damaged post. Alvarez (and perhaps an uncredited Diablo Cody, who worked on the screenplay) is having some fun here, most evident when Eric begins flipping through the infamous book, this time around full of emphatic annotations. Mia shows more of a sensitivity to the evil at hand than the others, insisting on a vile smell as they enter the cabin. She also sees something outside. Knowing that no one will listen to her, she escapes through a window, but the "Ringu"-like apparition appears again on the road and she swerves, crashing. Caught by moving tree tendrils, the demon takes possession, just as illustrated in that awful, flesh-covered tome. She's found, but upon their return, she attacks registered nurse Olivia, vomiting a torrent of blood on the woman's face, before flipping into opening left by the trap door into the basement. The others chain the door shut. But the evil's already out. Alvarez skillfully honors the old, using practical effects and that famous whooshing camera, while turning up the gore. By the film's climax, it is literally raining blood. Ash's (Bruce Campbell) original bodily travails are given homage not once, but twice. The film even offers subtext via Mia and David's back story involving a mother who went mad and the son who deserted her, only to try and save his sister. Levy seems unlikely casting, but she puts across the shell of an addict with a sorrowful past turned freakish, creepy demon, then determined survivor. Male support fares better than female, although Lucas shows demonic chops and the bland Elizabeth Blackmore (as David's girlfriend Natalie) gets one of the film's unlikeliest laughs, albeit via prosthetic effects. Cat and dog lovers may be dismayed by this edition, but rest assured Alvarez reserves his more realistic mayhem for the humans. This "Evil Dead" may not be as inherently horrifying as the first, but it is damn good fun.