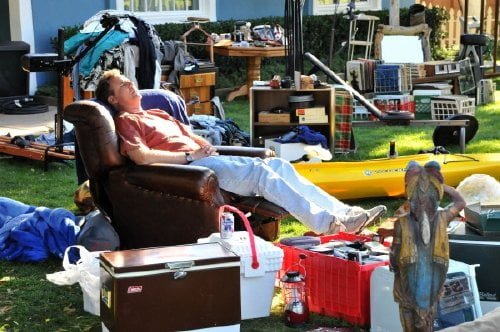 Nick Halsey (Will Ferrell) is having a bad day. His boss fired him for going on a drunken binge and molesting a pretty colleague during a business convention. He arrives home to find all of his worldly possessions scattered on the front lawn and the locks and alarm codes to the house changed. His first order of business, though, is to get some beer. He gets drunk, again, and passes out in his favorite easy chair, Reality will slowly surface in Nick’s mind and he will soon find out that “Everything Must Go,”

After sixteen years with the same company, regional V.P. of Sales Nick Halsey (Will Ferrell) finds out he's lost his job because of a series of alcohol-related incidents. He leaves his parting gift, a Swiss army knife, in his boss, Gary's (Glenn Howerton, TV's 'It's Always Sunny in Philadelphia'), tire, stocks up at the liquor store and arrives home to find the locks changed, his belongings on the front lawn and nobody home. At first he's in denial, but after talking to his AA sponsor (Michael Peña, "Battle: Los Angeles," "The Lincoln Lawyer") and meeting latchkey kid Kenny (Christopher Jordan Wallace, son of Notorious BIG), Nick finally realizes "Everything Must Go." First time writer/director Dan Rush takes a crack at Raymond Carver short story "Why Don't You Dance" with Will Ferrell in a rare dramatic role and the results are cliched and too emotionally restrained to make much of a mark. The film only really comes alive in its small moments of humor and in the development of Kenny as a crack salesman. Christopher Jordan Wallace, who got his start portraying dad's younger years in "Notorious," walks away with the whole movie. Ferrell doesn't change his expression much, that deadpan look which works so well in comedy coming across as merely deadened here. In fact, there's not too much difference between Ferrell's interpretation of Nick drunk and Nick sober besides a slightly heightened energy level. He's OK, but the rooting interest in his character is marginal. The relationship which develops between him and new very pregnant neighbor Samantha (Rebecca Hall, "The Town"), whom we come to find out is married to Nick's younger equivalent, doesn't work and goes nowhere. An impulsive visit to an old high school acquaintance Delilah (Laura Dern) reminds us how little we've seen of the wonderful Dern lately, who shades in some of Nick's basic decency. Michael Peña seems uncomfortable in the role of a police detective who helps Nick get out of some jams. Stephen Root provides some uncomfortable comic relief as Nick's kinky next-door neighbor. "Everything Must Go" is one of those character pieces where the detritus of the old must be acknowledged and left behind in order to go forward and it's merely OK. Christopher Jordan Wallace, though, keeps our attention even when he's just circling aimlessly on his bike, so Rush has succeeded providing a platform for a breakthrough performance.

I expected, going in to “Everything Must Go,” that I was in store for yet another trademark Will Ferrell laugher. I have grown tired of his usual shtick so I was pleased and surprised that the comic actor gives a performance grounded in the dramatic. Do not get me wrong, there is comedy galore throughout this dramedy, but it is based on the realty of one man coping with a life gone sour. With all his stuff strewn across the lawn and Nick living there amidst it all, the neighbors complain to the police. A squad car arrives and the officers tell him that he is breaking the law living on the lawn. Since he has had more than a few Pabst Blue Ribbons, he turns combative and is arrested for public drunkenness. Luckily, his AA sponsor is a police detective, Frank Garcia (Michael Pena), and he gets Nick’s release. Frank tells Nick that he has three days to prove that he is selling his possessions and not living on the front lawn permanently. Fortunately for Nick, the son of a housekeeper working down the street, Kenny (Christopher Jordan Wallace), rides his bike in circles in front of Nick’s “home.” Really wanting a beer, he hires Kenny to babysit his yard and chase off anyone that approaches. Kenny agrees only if Nick buys him some beef jerky. When someone stops by and tries to buy something from Nick’s “yard sale, he realizes that Kenny has the makings of a salesman. They haggle over salary and a new friendship and business partnership is formed. 15-year old newcomer Wallace holds his own with comedian Ferrell and there is great chemistry between them. Observing all the craziness going on across the street is Nick’s new and pregnant neighbor Samantha (Rebecca Hall). Like him when he was working, her husband Jack is always on the road and Nick sees himself in the younger man – a hard worker and equally hard drinker. She is a bit of sanity in Nick’s now insane life and a real friendship grows between the neighbors. Other characters – Pena’s Det. Garcia, Nick’s next door neighbor played by Stephen Root and Laura Dern as Nick’s former high schoolmate, Delilah – are there but provide little to the story. That story, by writer-director Dan Rash adapting the short story, “Why Don’t You Dance?” by Raymond Carver, is really about Nick and Kenny and they are worth the attention.