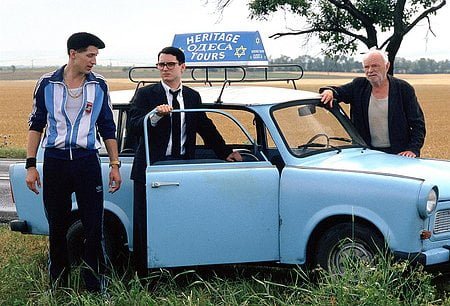 Jonathan (Elijah Wood, "The Lord of the Rings" trilogy), is a 'collector,' pinning the detritus of his family's fragmented history up on a wall in plastic bags, a family tree of false teeth, coins, an amber locket, a condom. The death of his grandmother is a catalyst to get answers about his grandfather's escape from the Ukraine and so New Yorker Jonathan ends up crossing paths with Odessian Alex (Eugene Hutz, lead of the gypsy punk band Gogel Bordello). He's the ostensibly English speaking tour guide for Heritage Tours, a tatty Ukrainian outfit catering to Jews searching for their roots. Alex's grandfather (Boris Leskin, "Men in Black"), who thinks he's blind, is the tour driver who will give Alex some interesting insights into his own history, which proves intertwined with Jonathan's when "Everything Is Illuminated."

Writer (from Jonathan Foer's novel and New Yorker short story 'A Very Rigid Search')/director Liev Schreiber ("The Manchurian Candidate" actor in his behind-the-camera debut) has obviously found material close to his own heart and experience in "Everything Is Illuminated." Schreiber begins on slightly shaky ground with comedy whose initial excess of quirks verges on the offputting, but once he settles in, he gradually twists the fabric of his film into something moving and deep. Jonathan and Alex's illumination is how our history informs our current existence and connects us to a larger landscape. The early humor revolves around Alex and his fractured English ('Many girls want to be carnal with me because I'm such a premium dancer'). Alex, whose 'westernized' fashion sense is a kind of hip hop take on "Saturday Night Fever," is as alien and 'American' to his grandfather as the arriving Jonathan, clad in a somber black suit circa 1960's FBI wearing the type of glasses that make one look bug-eyed. Jonfan, as Alex pronounces it, is greeted at the train station with a band playing 'The Star-Spangled Banner' before being introduced to his driver and his uniformed dog Sammy Davis Junior, Junior (border collies Mickey and Mouse, trained by Boone Narr) who wears a T-shirt proclaiming it to be the 'officious seeing eye bitch.' When Jonathan professes fear of both blind drivers and dogs, Alex assures him that grandfather can see just fine and that he has just said it is not possible to be afraid of dogs. And so Jonathan's deposited in the back seat with granddad's beloved pet and they set off to find the small village of Trachimbrod, the birthplace of Safran Foer. Gradually these strangers begin to connect along the road, Jonathan's claim of vegetarianism ('What's wrong with him?') turned into a celebration of the potato ('Welcome to the Ukraine!'), Sammy Davis Junior, Junior standing guard by the American's hotel room door at night. But the spectre of WWII hovers over them. Jonathan is quick to pick up on the fact that the Russian-speaking old man, who will not believe the American's claim that his dog's namesake was a famous Jew, refers to him as 'the Jew.' Alex is startled to learn that his fellow Ukrainians were anti-Semitic before the war. The film's tone takes on a marked change during a scene where Alex stops to ask directions of a group of rural laborers (the scene plays like Peter Riegert's questioning of "Local Hero's" fisherman, except with a menacing undertone) and Alex's frustration with Jonathan's intervention, which brands them both as tourists, is taken out on Sammy Davis, Junior, Junior. The old man is enraged, the score (Paul Cantelon of the Wild Colonials) turns somber, memories begin to bubble to the surface for the old, objects reveal new meaning for the young. While Alex's narration and dialogue can be amusing, Schreiber's talents as a filmmaker are stronger putting across the more esoteric material. Trachimbrod is first envisioned with a series of feet, the story told by their shoes, boots or bareness. It's also embodied in the house of an old woman (Lista, soap opera star Laryssa Lauret) surrounded by fields of sunflowers and sheets drying in the breeze. Lista, a collector like Jonathan, has stored Trachimbrod like he has collected the Foer family, and her memories bring its inhabitants, past and present, to life. Metaphor abounds, grandfather's 'blindness' a denial of the past and a clear counterpart to Jonathan's eyeglasses, a ready magnifier for the clues he seeks. Elijah Wood's distinct peepers are the crux of his character here and he does well enough as the 'quiet American,' but the journey goes far deeper for Hutz and Leskin. Hutz, who resembles a young John Turturro with gold teeth, makes a smashing debut with his deft handling of both the comical and the tragic. Wood's character may have travelled farther, but it is Hutz who changes most profoundly (Hutz's narration of a letter to Jonathan (the source material was originally composed of Alex's letters) closes the film on the perfect note). Leskin plays the comedy boisterously, but the emotions more inwardly, befitting of his generation. Laryssa Lauret transports her audience with her verbal remembrances, being it 'flying' with a kiss or giving witness to the dead. The film's locations in Prague and surrounding areas are all convincing standins, the final destination looking like a primitive rendering of a fairy tale illustration. Cinematographer Matthew Libatique's ("Requiem for a Dream," "Gothika") experience working in cramped spaces with "Phone Booth" pay off where so much of this film occurs in the junky old Heritage Tours Trabant and his composition adds to the film's transition from gritty realism to something more dreamlike, but the film, at least as projected digitally, suffers from grainy video lines and occasional bouts of pixelation.

Jonathan Saffron Foer (Elijah Wood) is a collector – of anything. One of his most prized collectibles is an old photograph of his grandfather with a young woman in their native Ukraine. Jonathan obsesses over the picture until he decides to go back to the old country and try to find the woman who saved the elder Foer in Everything Is Illuminated.” Veteran character actor Liev Schreiber forgoes his usual thesping duties in his writing/directing debut in his adaptation of Jonathan Saffron Foer autobiographical novel. As the film begins in its quirky way, we meet Foer as he diligently collects everything and anything he finds, sealing each item in a ziplock bag and tacking it to his wall. At first, Everything Is Illuminated” appears to be heading down an eccentric path that is sometimes funny but mostly just weird. Then, Jonathan, obsessed with the old photo, makes the decision to journey to the Ukraine and get some answers about his family past. This decision propels “Everything…” from merely idiosyncratic to a trek that has real soul and drama, but one mixed well with humor. Foer arrives at Odessa and is greeted by Alex (Eugene Hutz) of Heritage Tours, a tiny company that takes American Jews to the Ukrainian countryside to find their roots. Enlisting his purportedly blind grandfather (Boris Leskin) as their driver and his mongrel mutt, Sammy Davis Junior Junior, the quartet set off to the countryside to delve into the elder Foer’s past. Live Shreiber shows a deft hand in using humor and drama, in pretty much equal measures, to tell of the younger Foer’s journey to a home he has never seen. The introduction of Alex initially takes on a buffoonish air with his English malapropisms, chintzy bling and outfits that are a throwback to the 1980’s disco days. Grandfather is seen as a gruff, anti-Semitic old man who insists that he is blind (but still drives their tiny, beat-up tour mobile) and adores his pooch. (Sammy Davis Junior Junior is one of the best dogs-in-movies so far this year). The humor and silliness that is part of “Everything Is Illuminated” is tempered with Shreiber’s subtle examination of the World War II holocaust as seen from the microcosm of the Ukrainian countryside. As the film unfolds, Jonathan and his companions are taken to a land where people were slaughtered for the sole fact that they were Jews. This is a powerful and poignant aspect of “Everything…” but not one that hammers you over the head. Without dwelling on it, Shreiber introduces the idea that the Nazi atrocities were not just committed by Germans. In fact, anti-Semitic Ukrainians were willingly recruited into Hitler’s fascist force and, history shows, were oftentimes more ruthless than their German keepers. Shreiber should be applauded for the understated examination of this little known history. Elisha Wood plays Jonathan as a blank cipher with his oversized glasses, giving him an owlish look, and his severe black suit. You never rally break the surface of Foer’s personality but that, I think, is the intent of the director. Eugene Hutz, on the other hand, is an outrageous mix of self-perceived cool and funky costume and is a genuine humanist. The first time actor makes a notable splash as Alex, making me want to see more of this budding thespian. Boris Leskin, speaking little and always in his native Ukrainian, comes across as a mean spirited old man but, in the end, is fully realized with his own inner turmoil. Using the Czech Republic to stand in for the Ukraine, Shreiber evokes the look and feel of a world that has a long way to go to catch up with the modern environment we are so used to. You don’t see convenience stores or gas stations on every corner but are immersed into a near-primitive land that rolls on and on, without a break. The rustic rural land takes on a character of its own as Jonathan’s journey unfolds. Everything Is Illuminated” is a fascinating debut for it auteur but one that will be hard pressed to appeal to the masses. It will, though, find an audience in the avid filmgoer that appreciates a very different kind of trip on a road rarely taken.