Everything Everywhere All at Once 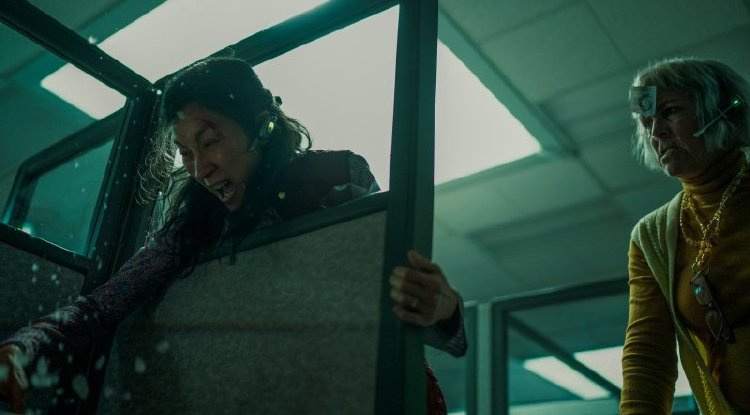 Chinese American laundromat owner Evelyn Wang (Michelle Yeoh) is already stressed by her family and business when she has to face an IRS agent's (Jamie Lee Curtis) audit.  When she's suddenly plunged into a multi-dimensional crisis, Evelyn's problems become "Everything Everywhere All at Once."

"Swiss Army Man’s" Daniels (Kwan and Scheinert) are back with another outrageous idea packed with envelope-pushing humor and game movie stars.  This time, however, visual overload and exhaustive pacing do not hide the fact that this premise isn’t as wholly original as their first and that it is just not worth the effort to figure out if Evelyn’s moves across a dozen or so dimensions actually really add up to anything in and of themselves.   “Everything Everywhere All at Once” is a series of outrageous set pieces culminating in introspective self realization and an emotionally cathartic family moment.  It is also a real showcase for the wonderful Yeoh, a new consideration of Curtis, a welcome return for “Indiana Jones and the Temple of Doom’s” Short Round, Ke Huy Quan, as Evelyn’s husband and a breakthrough role for Stephanie Hsu (“Shang-Chi and the Legend of the Ten Rings”) as her daughter.

We meet Evelyn sitting at a table piled high with receipts in the tiny, cluttered apartment the Wangs live in above their laundromat.  She’s the type of woman who takes everything on herself and is so stressed she can’t finish one thing before having her attention claimed by the next.  While she frets about what her elderly father (James Hong, “Big Trouble in Little China”) thinks, she has no time for her husband, who has been trying to serve her with divorce papers, and constantly clashes with her daughter, whose gay lifestyle and rebellious look adds to her own anxiety about her dad.

In the elevator on their way to their IRS appointment, Waymond, who has been pushing his father-in-law’s wheelchair, suddenly whips out a type of headset, puts it on Evelyn’s head, gives her a weird set of instructions involving switching her shoes to the wrong feet, then warns her he won’t remember what he’s just done.  It will take both Evelyn and us a while to figure out that this is the Alpha Universe’s version of Waymond, the original starting point which has been spun off into multiple universes by every bad decision Evelyn’s ever made.  (One of the film’s spottier notions is that what one Evelyn experiences is felt by all, but it is deployed with spectacular irregularity.)  As their IRS auditor demands answers and Evelyn’s attention, she follows Waymond’s instructions and, after seeing her life flash before her eyes, is catapulted into slow motion kung fu fight like “The Matrix” set in the world’s dingiest set of office cubicles (which, um, is not unlike some actual scenes from “The Matrix”).

With this we learn that Evelyn was a disappointment to her father as she made her way out of the womb and that her marriage to Waymond caused an estrangement.  As Evelyn leaps into various iterations of herself based on different choices made earlier in her life (a pizza sign twirler, a chef, a smart looking woman with hot dogs for fingers), she’ll latch onto the one where she is a world famous actress (featuring footage of the real Yeoh at premieres) being wooed by Waymond, a sure sign, to her, that she was better off without him.  She’ll also learn of a monster called Jobu Tupaki, pure chaos set on destruction, who happens to look a lot like Joy and who she must defeat.

The Daniels are far more successful with ideas and goofy props than narrative coherence, their best being the concept that targeted universe jumping is accomplished with the most statistically outrageous things.  What begins with Waymond navigating a jump with four paper cuts evolves into a chase achieved by diving cheek first onto butt plugs.  Googly eyes are playfully introduced in the laundromat (Evelyn’s not in on the joke), then reappear when Evelyn and Joy converse as rocks in a universe where living things haven’t evolved yet.  A customer Evelyn calls Big Nose (Jenny Slate) takes her on in another using her pocketbook Pekingese as a weapon.

Buried beneath the cacophony of its sci-fi silliness, “Everything Everywhere All at Once” has a message about ignoring life’s distractions in favor of what is truly important.  It succeeds as well as it does because it rests on Yeoh’s classy shoulders.