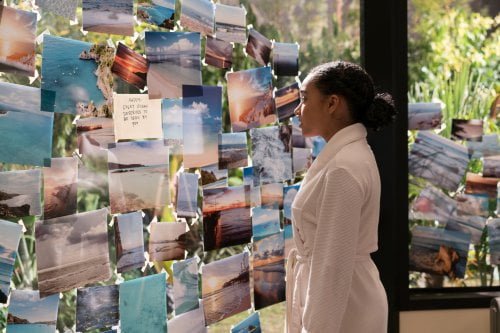 It is a bit of a thrill to see a commercial, mainstream adaptation of a YA novel using inventive ways to tell a story. Director Stella Meghie and her production team take a romance largely conducted via texting and avoid the trap of throwing graphics on the screen, instead using Maddy's imagination and her interest in architecture to not only move their story ahead but to comment upon it. Adapting Nicola Yoon's book, screenwriter J. Mills Goodloe ("The Age of Adaline") falls into some traps, but the film's two stars are so thoroughly engaging, those likely won't matter much to the film's target audience (very receptive at a promotional screening). As in the earlier "Before I Fall," we are in a world with no economic issues. Pauline Whittier's house is a showplace, albeit one with a hallway airlock and irradiator. Maddy spends most of her time in a custom designed sunroom, a glass bubble which brings the outside in. One wonders how the Bright family, headed by an abusive, alcoholic father who can't hold down a job can afford to move in next door to such a palace. When Maddy secretly applies online for a credit card, we question how she funds it. One must push aside such quibbles (there is a later one involving an airplane, which a SCID sufferer would surely recognize as a petri dish of an environment) to enjoy the film's more romantic and disturbing aspects. Maddy dresses all in white and spends her days reading, making models for her online architecture class, chatting in the support group her mother insisted upon and publishing her 'Life Is Short' one line book reviews. Her diet is stringently regulated and the only person she interacts with fact to face besides her mother and Carla is Carla's daughter Rosa (Danube R. Hermosillo), all of whom change their shoes and wash their hands vigorously before entering the house. On the day the film begins, her eighteenth birthday, her mother presents a vanilla cake with white icing to eat while watching "Moonstruck." When the doorbell rings, it is a highly unusual occurrence. Pauline is polite if not exactly friendly when she opens the door to the black clad Olly and his sister Kayra (Taylor Hickson, "Deadpool") proffering a Bundt cake from their mom as an 'apology' for moving in next door (Olly's sense of humor is irreverent). She thanks them, but says she cannot accept it for 'complicated reasons.' Whey Olly asks if her daughter is home, she says no, and slams the door. But later that night, Olly and Maddy spy each other and he writes his cell number on the window. He stages a Bundt 'suicide attempt' from the ledge. Once Carla allows him inside, they really connect, Olly breaking the ice with five questions (favorite color, book, vice...), but it is one that charts their future - 'Where would you go if you could go anywhere?' Maddy's answer? The ocean. Then Maddy witnesses a violent exchange between Olly and his dad, who punches the boy. Panicked, she runs out of the house to see if he's OK. Pauline drags her back inside and the truth comes out. Pauline fires Carla, forbids Maddy to contact Olly and limits her Internet use to three hours a day supervised by Nurse Janet (Marion Eisman), whom Maddy dubs Nurse Ratched. Maddy buys two tickets to Hawaii, the place she was last together with her family (dad and a brother died in a car crash shortly thereafter) telling Olly she's got new medication that controls her SCID but her mom's still too cautious to allow her out. After some hesitation, Olly quickly packs a bag. Amandla Stenberg and Nick Robinson are both tasked with playing teens so perfect it defies believability, yet both actors pull us into their respective plights and their burgeoning romance. The filmmakers stage early text chats as fantastical meetings within Maddy's architectural models, where she always places a plastic astronaut, a metaphor for her existence in a bubble, seen trying to drink from a straw in a diner. While Olly, whose favorite word is 'macabre,' remains in black, Maddy's wardrobe grows more colorful as she experiences the outside world (Olly's Hawaiian shirt which Maddy dons after their first night spent together is black with an orchid print). The film has parallels in both "Me Before You" and "The Space Between Us," both YA romances with big obstacles. "Everything, Everything's" obstacle proves more insidious, a fairly obvious plot device in service to a happy ending. The movie has its faults, but Maddy and Olly make for memorable, intellectually curious characters whose romance blooms in extraordinary surroundings. Grade: