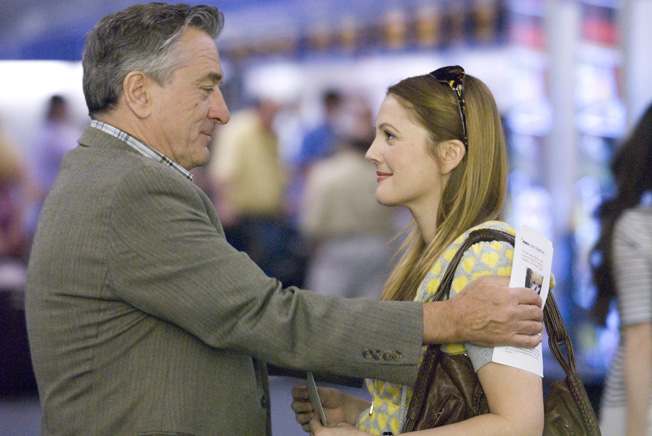 Recently widowed Frank (Robert De Niro, "Meet the Fockers," "Righteous Kill"), just recovering from a serious lung ailment, is in a whirl of activity preparing his home for the return of his four adult children, but one by one they call to cancel with various excuses. Deeply disappointed, but not resentful, Frank packs a bag and decides to surprise each with a visit to make sure "Everybody's Fine."

Writer/director Kirk Jones ("Waking Ned Devine," "Nanny McPhee") segues from British twee to adapt the 1990 Giuseppe Tornatore film "Stanno tutti bene" and turn it into American schmaltz. The film boasts a fine cast, and after seeing advertising trailers I didn't expect much, but I expected a whole lot more than I got. "Everybody's Fine" is a totally false film with shallow insights and little to no character development all wrapped up in a sappy score (Dario Marianelli, "The Brave One," "The Soloist") that manufactures emotions while keeping things light. The film begins with a montage of furious home maintenance, a doctor's visit and a trip to the wine shop that is supposed to amuse with its customer and clerk's equal cluelessness. Frank, the type of person who tells every stranger his business, buys a train ticket to New York City to visit his artist son David, the only one nobody's heard from and finds him not at home. After a wander, Frank's cracked wise with a hooker, spied his son's tortured work in a gallery window and visited a diner, but in the end, he must slip the first of four envelopes under his son's door and move on to the next visit, daughter Amy (Kate Beckinsale, "Whiteout") in Chicago. Along the way, he notes his seatmate has a fixed look upwards out the window and so he quizzes her, interminably, on what she's looking at until she finally arrives at telephone poles, all so that he can give some expository back story on how he made his living and provide the director with an obvious visual for communication (Jones layers in phone calls among the siblings as Frank's train races beside the wires) and a maudlin finale. Amy lives in a modern house out of Architectural Digest (she is a partner in a marketing firm) and has a precocious son Jack (Lucian Maisel) who bonds with grandad over a game of golf. Jack overreacts in bad temper, though when dad Tom (James Frain, "Elizabeth," SHOtime's "The Tudors") asks for a pass at the dinner table and Amy tells dad that he cannot stay as she's flying out on business in the morning. He decides to move on to Denver where his son Robert (Sam Rockwell, "Moon," "Gentlemen Broncos") is a conductor and asks that Amy not tell him, as its meant to be a surprise, but those siblings' voices burning up the wires have let us in on the fact that David is in Mexico in some kind of drug-related trouble and that that is where Amy is really heading. Amy advises Robert to concoct a European tour to keep dad on the move, which he eventually does after admitting that he is not conducting the symphony but merely paying his bills as a drummer. Dad moves on to his last stop, Las Vegas, where he thinks Rosie (Drew Barrymore, "Fever Pitch," "Whip It") is a successful dancer. Rosie puts up a sham, but as with every visit, Frank's sniffed out the truth. The major premise of "Everybody's Fine" is that family shield each other from the truth to save others from worry and, although each could talk to their deceased mom, they could not to a father who 'pushed them too hard.' And yet Jones does nothing to indicate this other than the usual high hopes parents have for their children. In fact, in the most extreme case, the opposite sentiment is finally extolled. At each visit, Frank sees his child as a youngster and all are excited to see him, again refuting what we are otherwise being told. These people act absurdly based on a belief that is never conveyed. A last act fantasy, where Frank tells each child, in their younger personas all gathered around a picnic table, what he has deduced plays particularly false, and no mention is made of the fact that Frank lies to them as well, hiding the fact that his medication was trashed by a mugger (Brendan Sexton III, "Hide and Seek," "The Messenger") en route. Those overused telephone wires meet their symbolic match in dark storm clouds - how much more trite can things get? De Niro is too accepting and cutesy codger as Frank and never gives weight to his kids' underlying blame for their avoidance. Rockwell is too much the deadweight loser as Robert and Beckinsale and Barrymore are merely serviceable. Better are Frain and Maisel as the next generation of parent/child strife, perhaps the only believable characters in the film. Melissa Leo ("Frozen River") has a brief part as a truck driver who picks up Frank in order to tell him that 'facing the truth isn't always easy' and that 'people like easy, that's what they're used to,' as if Jones hasn't been hitting us over the head with this all along. "Everybody's Fine" thinks it's a heartwarming Christmas entry about family, but it's really an unnecessary remake with a name cast floundering about under hapless writing and directing. This one makes "The Blind Side" feel like realism.