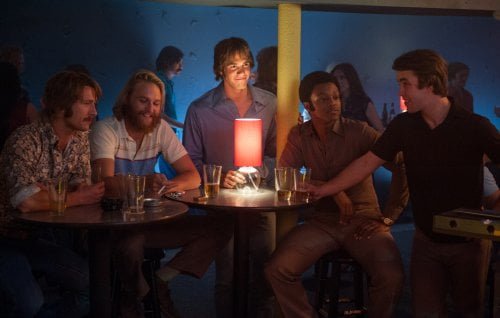 Established teammates and incoming Freshmen of Texas State's formidable baseball team get the special perk of being housed together in an old, sprawling home. Coach Gordan (Jonathan Breck, "Parkland") lays down the rules of no girls upstairs or alcohol in the house, but with three days before classes begin "Everybody Wants Some!!"

Writer/director Richard Linklater ("Before Sunrise," "Boyhood") retreats from the responsibilities of adulthood depicted in his last two films and returns to the pursuit of fun with his latest, his 'spiritual sequel' to 1993's "Dazed and Confused." But this being Linklater, there are many insights into just what it means to find one's path in life even if the only route his characters seek is the quickest to the next beer, bong or booty. As 'My Sharona' blares on the soundtrack (the film's title is from the Van Halen song), Jake (Blake Jenner, 'Glee's' Ryder Lynn) arrives at his new digs to find an open jar of Miracle Whip and a bunch of beers in the fridge, a jury-rigged garden hose snaking upstairs and a kitchen ceiling about to collapse. Asked his playing position, McReynolds (Tyler Hoechlin, TV's 'Teen Wolf,' the epitome of 70's male mustachioed jock) informs him he hates pitchers. Dale Douglas (J. Quinton Johnson) disparages the idea he might be Jake's roommate, pointing out that Billy Autrey (Will Brittain, "Lila & Eve") is a hayseed umbilically connected via phone cord to his girlfriend back at the farm. Then Finn (Glen Powell, "The Expendables 3," "Ride Along 2") and Willoughby (Wyatt Russell, "Cold in July," "22 Jump Street") break the ice - it's time to go drinking before the team meeting. Along the way, the Seniors invite every pretty girl they see to their Saturday night bash. Only two don't fall in, Beverly (Zoey Deutch, "Dirty Grandpa") noting that she does like the cute guy in the back - Jake. The guys spend their weekend trying on different women (Dora Madison ("The Loft") is buoyant as Val) and different guises, from disco to country to punk, but it's not until Jake scores an invite to Bev's theatrically themed party and turns into Alice's white rabbit that he finds his comfort zone. There's also the requisite newbie hazing and constant competition, not only on the field, but in ping pong, bong hits and knuckle flicking. Jake finds a mentor of sorts in Willoughby, another pitcher and a California stoner who advises embracing one's weirdness when he's not exulting in the ascending structure of Pink Floyd's 'Fearless.' Linklater's assembled a great, extensive cast of little known actors, each taking their type and hitting it out of the park. Jenner gives Jake a bit more confidence that would be the norm for the good looking nice kid he portrays, anchoring and modulating the insanity around him. Juston Street ("My All American"), sporting a bowl cut and Italian horn, is the gonzo version of a Scorsese street thug, Temple Baker's Plummer looks he could have stepped out of "Porky's" while Ryan Guzman ("The Boy Next Door" reps "Saturday Night Fever." Along with his prop pipe, Powell assumes a leadership mantle which may be ruffled if not dislodged. Russell's assured, amiable pothead hides a truth Linklater makes both sad and funny. Hoechlin's wraps his cock-of-the-walk in a thin skin. Austin Amelio ('The Walking Dead's' Dwight) is the fast-talking Nesbit, Tanner Kalina his unlikely upsetter Brumley. Johnson is the lone Black member of the team, oddly uncommented upon (this is Texas in 1980 and notably, Linklater only portrays interracial pair ups) but his calm cool is bracing. Deutch lends clear-eyed, infectious charm as Jake's romantic interest. The soundtrack is an ambitious sampling ranging all across the map (Patti Smith, Devo, Gary Numan, Cheap Trick, Foreigner, Donna Summer...), the lads singalong to 'Rapper's Delight' one of many highlights. "Everybody Wants Some!!" is a movie about a baseball team we only see play once at a school with just one classroom scene at a time where sex and drugs and rock 'n roll are innocent fun and it's a winner. Grade: