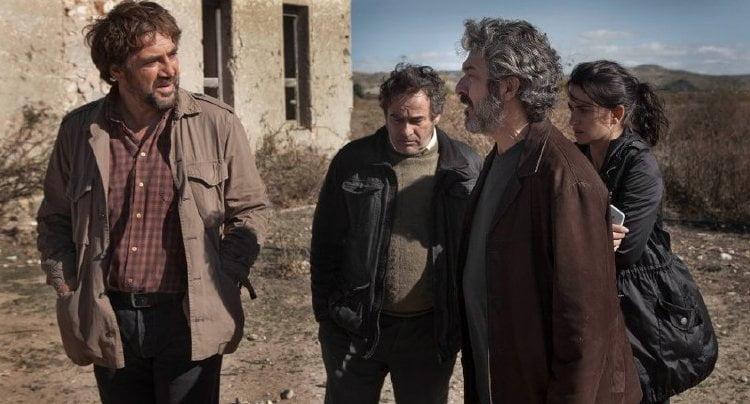 Laura (Penelope Cruz) is travelling, with her two kids, from Buenos Ares to Madrid for her sister’s wedding. Once there, though, events become unpredictable and family secrets will be revealed because “Everybody Knows.”

When Laura (Penélope Cruz) travels from Argentina with her sixteen year-old Irene (Carla Campra) and her young son Diego (Iván Chavero) to her small Spanish home town for the wedding of her younger sister Ana (Inma Cuesta) she is carrying a long held secret. But when Irene is kidnapped on the evening of the wedding, the stress causes equally long held resentments to surface and Laura comes to realize that “Everybody Knows.” Writer/director Asghar Farhadi (“A Separation”) has ventured outside of Iran before, his “The Past” located in France, albeit with an Iranian husband arriving from Tehran. His latest represents more of a departure, taking place in Spain with a Spanish and Argentinian cast. But while the tenuous ties that bind husbands and wives and family members have always been Farhadi’s preoccupation, they’ve usually been cast against the peculiarities of his own culture. This time around, he begins with a bang, his extended family wedding one of the most cinematically significant in some time, but oddly, his film suffers diminishing returns as skeletons start to tumble out of closets. As Laura and her kids near their destination, people everywhere stop and wave to the returning beauty. Her Aunt Mariana (Elvira Mínguez) and Uncle Fernando (Eduard Fernández), who own the local hotel, spill out to greet them when Ana pulls in, followed by Ana’s groom Joan (Roger Casamajor), quickly approved by Laura, and cousin Rocío (Sara Sálamo), who works at the hotel and takes their bags. Irene is quickly comandeered by Felipe (Sergio Castellanos), driving off on his motor scooter. Ana looks on with pleasure as Laura greets their aging dad Antonio (Ramón Barea) in the courtyard below. This familial bustle spills over into the wedding. From the pulpit the priest notes the largesse of Laura’s absent husband, Alejandro (Ricardo Darín), who paid for a restoration of the church tower. That is where Felipe and Irene have snuck off to, Felipe showing Irene the entwined initials of her mother and Paco (Javier Bardem), the man she was once in love with. Irene, a true wild child, rings the church bell, interrupting the ceremony below. Rice is thrown, food and drink appears and music and dancing commence. Everyone couldn’t be happier except for Irene, overcome, perhaps by jet lag. She’s put to bed upstairs. The party continues, moving inside to escape a sudden shower. Then the lights go out. No matter! Paco drives to his countryside vineyard for a generator and the lights return to cheering. But something dreadful has happened in the interim. Irene is no longer in her room, her bed scattered with news clippings of the kidnapping of a young girl several years earlier and warnings not to involve the police. Fernando turns to a friend, Jorge (José Ángel Egido), retired from the police and Jorge begins to uncover such secrets as the fact that the ‘successful’ Alejandro is, in fact, a former alcoholic and bankrupt. Paco has to pull the inebriated Antonio from the town cafe, where he is accusing everyone of having stolen his land, first and foremost Paco, the son of a former servant whose land was purchased from Laura when she needed money. Kidnapping suspicions turn on just about everyone. But while the mystery is eventually solved, the film isn’t satisfying. What is Farhadi trying to say here? Alejandro’s firm faith in God is mocked (and don’t forget his own daughter rang a church bell at an inappropriate time), but his faith is rewarded. Or is this a statement on class, Paco’s status clearly looked down upon among the family he so easily moves among? Laura’s secret is all too easy to guess. The film may have been more involving if the answer had been left ambiguous. Yet the biggest mystery of all - why Laura left Paco, the man everyone knew she loved, for Alejandro - is never answered. Grade:

Iranian filmmaker Asghar Farhadi makes his first foray, in culture (Latino) and in language (Spanish), with a pot-boiling soap opera steeped in the criminal mystery of a kidnapping during one of those most joyous events – a family wedding. The story is in two parts. The first is the gathering of family in the old neighborhood in Madrid where Laura, her teen daughter, Irene (Carla Campra), and young son, Diego (Ivan Chavero), arrive with much acclaim from family and friends. Laura’s husband, Alejandro (Ricardo Darin) does not come with them, for reasons made apparent later. This part amply shows the raucousness of an extended family. The film’s pivotal moment, and change in direction, occurs during the wedding when, suddenly, there is a power failure. The seemingly innocent outage, though, is a mask to cover the dastardly deed – Irene is kidnapped. This criminal act spawns a drama of ransom and revenge where the family secret is revealed and lives are salvaged or ruined. Farhadi’s huge ensemble cast of attractive and talented actors and actresses raise the bar in what is essentially a soap opera. The talent, the locale and the warm, sunny look of the film, even though the mystery is not all that mysterious to me, make this an easy film to watch. But, Farhadi’s Iranian POV did not translate to the fiery Spanish culture of the characters.