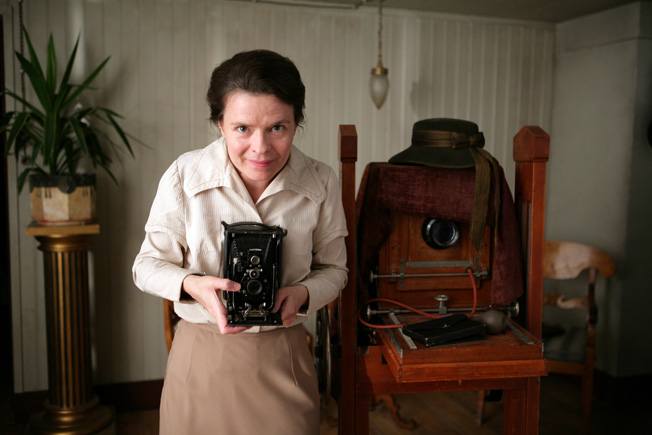 Maria Larsson (Maria Heiskanen, "Lights in the Dusk") is a young wife struggling with her household budget in turn of the century Sweden. When she wins a camera, she takes it to the local photography shop to sell it, but shop owner Sebastian Pedersen (Jesper Christensen, "The Inheritance," "Quantum of Solace") convinces her to try it first. Over the years, Maria will endure through her drunken husband's outbursts, raise seven children and see what could have been with Sebastian, but the gift he gave her, photography, set her spirit free while she captures life's "Everlasting Moments."

Director Jan Troell, known in the U.S. mostly for his early 70's films "The Emigrants" and its sequel "The New Land," stays in his native Sweden to tell the tale of his wife's great aunt as it was told to her by the woman's oldest daughter, Maja (Callin Öhrvall), whose character narrates the tale here. Troell revels in period and location detail with sepia-toned photography that lends both a historical and photographic viewpoint to his film, but "Everlasting Moments" is also a family epic about the strength of a matriarch that will also recall such Hollywood films as "I Remember Mama" and "The Bridges of Madison County." At first, all seems well with the sprawling Larsson family. They may not be rich, but, as Maja assures us, their father is big and strong and almost always gets chosen for work at the docks. Away from his heroine's gaze, Troell shows the lined-up dock workers behind thin, vertical slats which create geometric patterns with lighting that suggests film noir in broad daylight. Later at home, though, Sigfrid (Mikael Persbrandt) has returned drunk and a panicky Maria hordes her children away from his sloppy attentions. In a society that reveres temperance, Maria faces public shame because of her gossiped-about husband, but at home she faces worse. When she's badly injured by Sigge's drunken violence, Maria decides enough is enough and packs up her brood and goes to her father's house, but Grandmother Karna (Claire Wikholm) is not welcoming ('Mama is dead,' says Maria as her invalid father gazes at a photograph. 'Precisely,' he replies.) And so, as Maria struggles on with the ever-changing existence that is life with Sigge (he goes for long stretches without breaking his non-drinking vow), she also finds her apparent soul mate in Sebastian Pedersen, a man who plays the violin to the accompaniment of his hound, Leo. He demonstrates the 'magic' of photography by projecting a fluttering moth on a window onto her hand using the camera's lens. 'You see what you want to see,' he tells her and the next day, after emptying the chamber pot, Maria stops, stunned by the beauty of icicles hanging off a drain spout. As socialism makes its way to their post-WWI world, Sigge boasts about bombing strike-breakers and lands in jail, but Maria is more mortified that a girlfriend is present to get him out. About this time, Maria's amazing-for-the-time ability to operate a camera starts to become noticed and she is hired to take the death shots of a young girl who committed suicide. Her 'practice' shot, which includes the faces of curious kids staring in every window at the dead girl, is the picture that tells Sebastian Maria has real talent. Troell wisely lets us see the 'real' photograph first, so that we are stunned by the photojournalism on display in that first shot. The family story, visually punctuated by the artistic capture of a soon-to-be memory, is a dying art in and of its own - the passing down of tales from one generation to another. This verbal memoir has become a rich history in Troell's hands and Heiskanen, his lead actress, breathes the soul into it. She's a strong and good woman who rises above everything that is thrown her way, and yet she maintains an air of mystery, that unknowable that has Maja wondering at film's close just why Maria stayed with Sigfrid in the end, even after a jail term for her attempted murder. (The two are shown joyously dancing in a field, and yet there is a heart-breaking moment earlier where Maria runs to Sebastian only to discover that he is really and truly gone.) Persbrandt gives the strong impression of a simple man of another era. Character actor Christensen makes Sebastian, a Dane to Maria's Finn, the opposite of her blue collar husband - an art lover and man of delicate tastes. It's a lovely performance he has the chemistry of quiet, unrequited love with Heiskanen. The town comes alive through such characters as Miss Fagerdal (Ghita Nørby, "O' Horten"), an eccentric wigmaker Maja works for, or the Downs Syndrome child, Elsa, whom Maria offers to photograph, reassuring her mother of the child's worth. Animals, like Leo, are also part of this community. Ironically, Sigfrid saves a horse from brutal treatment, and it maintains a place with the Larssons through thick and thin, a symbol perhaps of Sigge's sober nature. Another prominent animal has been with us all along, Maria's cat, one of her first photography subjects. "Everlasting Moments" is like a family picture grouping with a last surviving member to spin out their stories. Troell, who shot the film along with Mischa Gavrjusjov, charts the Larssons through both the every day and the climatic, stopping once in a while to just look.

Maria Larsson (Maria Heiskane) drudges through her working class life married to her always drunk, philandering lout of a husband, Sigfrid (Mikael Persbrandt). It is the early 1900’s and Sweden, along with the rest of the world, is in the throes of social and political change. When Maria finds a camera she won years before, she decides to sell it to help pay the always-mounting bills. But the photo shop owner, Sebastian Pedersen (Jesper Christensen), convinces her to use, not sell, the camera, opening a whole new world for the young wife and mother in “Everlasting Moments.” Veteran filmmaker Jan Troel, known for his epic film, “The Immigrants,” creates a stalwart tale about the wife of a Swedish laborer. Her life consists of raising her children and coping with Sigge’s loutish ways. Her eyes are opened, for the first time, when Mr. Pedersen introduces her to the magic of photography. She develops a passion for the art that stays with her through and help cope with such adversities as war, hunger, cold, pregnancies and Sigge’s many mistresses. Period set and costume capture the early 1900’s expertly with great attention to detail. The actors who wear those clothes do a solid job in developing their characters with Maria Heiskane leading the pack as Maria. You should hate Mikael Persbrandt’ Sigge but the actor puts enough likability into him to convince that Maria would stay faithful to him. Jesper Christensen gives a touching perf as the kind, loving Sebastian who loves and admires Maria, but secretly and to himself. “Everlasting Moments” is a film buff kind of movie that, unfortunately, won’t make it to mainstream audiences. This is a finely crafted work of art that puts you in its world.