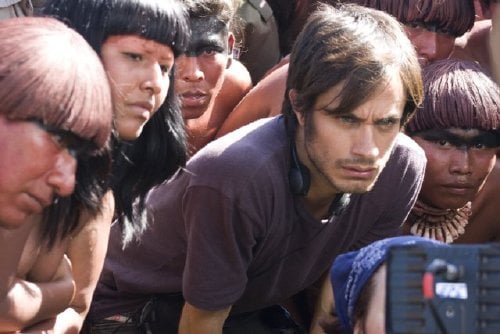 When a filmmaker and his crew journeys to the remote town of Cochabamaba in Bolivia to make a controversial film about Christopher Columbus, they arrive just as the local people rise up to fight the privatization of their water supply. The outsiders find themselves amidst protests and riots over the huge increases in the cost of the essential fluid and, perhaps, ”Even the Rain.”

También la lluvia A Spanish film crew arrives in Cochabamba, Bolivia to shoot a film about Christopher Columbus's exploitation of the native Indians, mostly because budget conscious producer Costa (Luis Tosar, "Mondays in the Sun," "Take My Eyes") is thrilled they can hire local Indian extras for $2/day. The film's director, Sebastián (Gael García Bernal, "Y Tu Mama Tambien," "Letters to Juliet"), becomes enamored of Daniel (Juan Carlos Aduviri) when he refuses to be turned away for an audition where all were promised consideration. Costa's hesitation proves itself when Daniel turns out to be the chief organizer in the increasingly violent demonstrations against the privatization of water which throttle the city in "Even the Rain." Frequent Ken Loach screenwriter Paul Laverty wrote this 'film within a film' political rumination on how the more things change, the more they stay the same. Director Icíar Bollaín ("Take My Eyes") doesn't use a lot of subtlety with the triple parallel storyline, but she does do a nice job staging a city under siege and some of her behind-the-movie scenes will recall Herzog's "Fitzcarraldo." But despite the solid, if obvious, message here, the film's two main protagonists, the exploitative Costa and the liberal sympathizer Sebastián do a last act switcheroo that's a bit hard to fathom. The crew have hardly gotten situated when Costa is using locals to erect a giant crucifix as Sebastián frets about safety. Rehearsals begin during an outdoor luncheon where star Antón (Karra Elejalde, "Timecrimes," "Biutiful") guzzles booze under the watchful eyes of hotel help who may turn up in that extra pool. Laverty backfills history here, with the actors playing priests Antonio de Montesinos (Raúl Arévalo, "Dark Blue Almost Black"), Juan, and Bartolomé de las Casas (Carlos Santos), Alberto, trying to one up each other with their historical lack of culpability. Once filming begins, Daniel proves perfect as Hatuey, as does his young daughter Belen (Milena Soliz), but Daniel's heart belongs to his people's fight for their rights, not his presence on the big screen. The film's featurette videographer Maria (Cassandra Ciangherotti) begs Costas to fund a documentary on the struggle, but he will not hear of it. The filmmakers and star practically cross picket lines to attend a reception with the mayor, who dismisses Sebastián's concerns for the locals. He also points out that they themselves have chosen not to enrich the populace. Daniel is injured, then bribed by Costas to stay out of the demonstrations until their film wraps. Daniel takes the money, but ends up arrested anyway. Costa's deal with the local police makes Sebastián uneasy, but when all hell breaks loose, it is Costa who refuses to leave Daniel's hysterical wife, agreeing to drive into the melee to save her injured daughter. And so the West comes in once again to exploit the natives on two fronts - filmmaking and water rights - the title is a reference to the fact that it is against the law to even gather rainwater - and people pay dearly for what they believe in. The West's use of their one and only God in the Columbus film is paralleled in Daniel's symbolic standin for Jesus Christ. 'I am the voice of Jesus Christ in the desert and you are in mortal sin,' Montesinos's line which is the crew's rallying cry and Sebastián's inspiration could be words from his mouth. For those who do not know the effects of water priviaization, "Even the Rain" is a good introduction, but as a film it leaves little to the imagination. This is the Spanish Foreign Language nominee for the 2011 Academy Award.