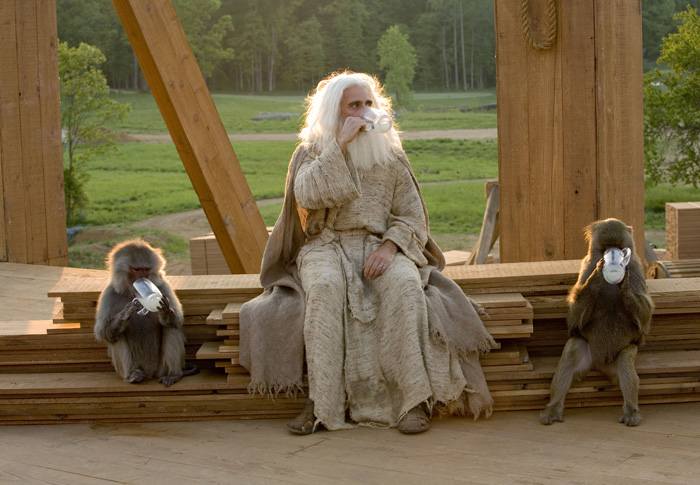 Evan Baxter (Steve Carell, "The 40 Year Old Virgin"), the Buffalo news anchor skewered by Bruce Nolan, is riding high after having been elected to congress with campaign promises to change the world. A new McMansion and some serious real estate on Capitol Hill await him in DC and an invite to cosponsor a Land Act bill by senior Congressman Long (John Goodman, "O Brother, Where Art Thou?") would seem to have him off to a good start, but God (Morgan Freeman, "Bruce Almighty") has different ideas for Baxter in "Evan Almighty."

Rumored to be the most expensive comedy ever made, the laughs come at a high price in "Evan Almighty," as much as $50 million per snicker. Switching gears from its predecessor, director Tom Shadyac ("Ace Ventura: Pet Detective," "Bruce Almighty"), screenwriter Steve Oedekerk and the "Garfield" duo of story scribes Joel Cohen and Alec Sokolow, aim for something more Capraesque, but their story set up is painfully forced and its denouement only vaguely satisfying. Thank god for all the cute animals. Cribbing from countless other films, "Evan Almighty" begins with a father making promises of family time that he immediately reneges on with work pressure. Baxter's chief of staff, Marty (John Michael Higgins, "For Your Consideration"), is excited by the opportunity of hitching their trailer to Long's and so Baxter must read through a voluminous bill. A second major problem? Marty's soundbite description of said legislation - 'a bill to open fringe areas of parks for development' - screams anti-environmentalism and corruption. No one seems to notice. Then strange things begin to happen. Evan's alarm, set for 7 a.m., keeps going off at 6:14. Pairs of birds and animals begin to follow him around. Piles of wood and antique tools are delivered to his home. God stops by to tell him to build an ark because of a flood due midday on September 22. The fastidious Baxter (we've witnessed a three step noise hair removal regimen, hair removal becoming a Carell speciality) cannot keep his beard from growing back as soon as he's shaved it and he finds he's quite comfy in the flowing robes he finds in his closet. Wife Joan (Lauren Graham, TV's 'The Gilmore Girls,' "Because I Said So") becomes seriously disturbed and takes the kids packing when Evan shares his mission during a nationally broadcast congressional committee meeting. For all its special effects (the animal sequences are truly delightful and a CGI but involving a fish tank is one of the film's few inspired moments) and comedic acting pedigrees, it is telling that the film's best scene is a quite moment between Morgan Freeman and Lauren Graham at a roadside restaurant where he gently prods her understanding while modernizing his loaves and fishes miracle. The remainder of the film is the buildup of both the ark and the pre-flood media blitz that finds crowds of people heckling Baxter even though pairs of animals from around the world have appeared at his ship building site. This type of film that wants its audience to congratulate itself on recognizing an 'in joke' so broad it smacks you upside the head. A montage of Carell alternately pounding his thumb with a mallet and falling off wood piles is a real groaner. Even worse is that Carell brings nothing funny to the table. Baxter's victory 'dance,' an uptight little number, is overused, but at least the actor does attain a type of weighed down wisdom the more he follows God's will. A couple of deadpan sight gags involving Evan and the animals are well staged. The big set piece finale is OK, although not always logical or clear in its editing. A credit roll sequence featuring the entire cast in dance party mode is nowhere near as satisfying as "Virgin's" love-in, but Molly Shannon ("Year of the Dog") as real estate agent Eve Adams gets in a few laughs writhing on the floor. "Evan Almighty" will appeal to summer movie goers looking for light entertainment of the thought-free variety, but it does not stand up to interrogation.

This is a slick looking sci-fi yarn that does not quite fulfill its promising premise. Techs are decent and the video is crystal clear but the story does not get me in the gut. It is like the ten little Indians (except they are six) where you know that someone is going to be killed – and they are, one at a time, to the expected ending. There is drama and mystery but it is the two dimensional kind. The characters, too, lack depth though all have grave faces as they face one crisis after another. The actors try their best to give gravitas to their roles but their characters are so thinly drawn, you never sympathize with them despite the dangers they face. Embeth Davitz, as mission controller, is the voice of Earth who explains, after the loss of communication with Europa 1 after a solar storm knocked the ships communications, what has happened to the stalwart crew of explorers. From this point, it is a found footage mockumentary that is such the rage of late. It is not particularly original, except it does depict man’s escape from the confines of our planet to beyond the moon for the very first time in a plausible way. Looks are not everything but “Europa Report” does have some good looks, production- wise. The film looks like it was assembled and edited in a computer with the many multi-screen views of the E1 cameras. Although barely 90 minutes long, the film feels long and, sometimes, ponderous.