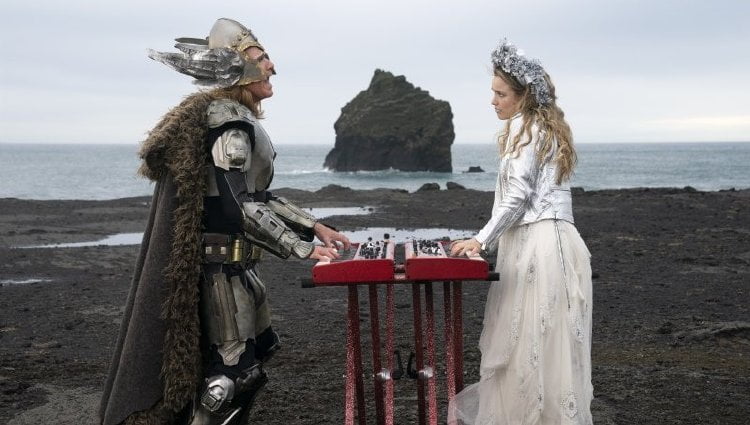 In 1974 in the small fishing village of Húsavík, Iceland, a small miracle occurred when Lars Erickssong, a young boy devastated by his mother’s death, began to sing and dance.  Even more astonishing, he was joined by Sigrit Ericksdottir (Rachel McAdams), a young girl who had never spoken before.  The reason for this sudden joyous outburst?  On their third attempt, with the song ‘Waterloo,” Abba had won a continental competition.  From this point forward, Lars is determined to follow in their footsteps, a dream only Sigrit, now his thirty-something band mate, encourages, in “Eurovision Song Contest: The Story of Fire Saga.”

The most consistent thread throughout Will Ferrell’s movie starring career has been his vocational parodies, movies like “Anchorman: The Legend of Ron Burgundy” and “Talledega Nights: The Ballad of Ricky Bobby.”  His latest colon punctuated starring vehicle is one of his warmest and funniest, its international setting and outrageous costumes recalling his professional figure skating outing “Blades of Glory.”  Along with his ‘Funny or Die’ writing colleague Andrew Steele, Ferrell aces several inspired running jokes including one paying homage to “Elf.”

Take, for example, everyone’s assumption that Sigrit is Lars’s sister, a question he always cluelessly responds to with ‘Probably not,’ much to the romantically inclined Sigrit’s consternation.  (The joke is amplified by the fact that Lars’s dad Erick Erickssong (Pierce Brosnan) is considered the area’s handsomest and that Sigrit’s surname is Ericksdottir.)

While Lars and Sigrit’s band Fire Saga plays locally, their hometown crowd always rejects their ‘Eurovision song,’ instead repeatedly demanding ‘Ja Ja Ding Dong.’  Unbeknownst to them, Iceland Public TV's Neils Brongus (Ólafur Darri Ólafsson) is looking for a twelfth act per Eurovision rules for Iceland’s runoff competition to ensure a slot for Katiana (Demi Lovato), their best ever shot to take the title.  While banker Victor Karlosson (Mikael Persbrandt) warns that hosting the competition, as the winner traditionally does, could bankrupt the country, Neils pulls a random entry to ensure their participation.  It is Fire Saga.  Húsavík, unaware of backstage manipulation, celebrates its parking ticket issuer (Lars) and music teacher (Sigrit).

Increasingly crazy developments land Fire Saga in Edinburgh as Iceland’s Eurovision entry and our naifs are overwhelmed by the ‘big city’ and glamorous contestants.  But after Lars turns Sigrit’s more direct sexual overtures down, declaring that ‘romance ruins bands,’ in steps the leonine Russian Alexander Lemtov (Dan Stevens, who evinced some of his comedic potential in TV's 'Legion'), who employs Greek songstress Mita Xenakis (Melissanthi Mahut) as his wingwoman/Lars distraction in order to woo Sigrit after recognizing her vocal potential.

Ferrell, who became a fan of the campy competition after being introduced to it in his Swedish wife’s home country (it began in 1956 and has produced such acts as Celine Dion), has the man-child thing down pat.  Rachel McAdams is right in synch with his earnest naivety (and is the only starring player whose singing voice is utilized on screen, albeit not for the more soaring numbers).  Stevens is an utter delight.  Brosnan doesn’t get much of a workout, required only to sit in a local pub looking embarrassed until he isn’t.  The film also features the BBC’s talk show host Graham Norton as a color commentator and Natasia Demetriou of TV's 'What We Do in the Shadows' as some kind of talent coach assistant.

“Eurovision Song Contest: The Story of Fire Saga” is consistently funny right down to its many inspired production elements.  Give it a spin.

Lars (Will Ferrell) has had the lifelong dream of he and his best friend Sigrit (Rachel McAdams) winning the prestigious annual European music award. Their chances, though, are slim to none until a horrific boat explosion kill all of the other Icelandic entrants, leaving Lars and Sigrit the defacto contestants from Iceland and get their shot at the “Eurovision Song Contest: The Story of Fire Saga.”

Aside from watching the funny trailer for the movie, I knew little, if anything, about the Eurovision contest so I expected a been-there-before rags-to-riches “A Star Is Born” saga without the angst. Director David Dobkin and scripters Will Ferrell and Andrew Steele do not provide that comedic variation of “A Star….” Instead, they create a funny, fast-paced parody of what I have learned is the premier European music competition.

Lars, since he first saw the European Song Contest as a boy in the tiny Icelandic fishing village of Husnavic, has been obsessed with entering the contest and bringing the glory home to his town. Unfortunately, his dad, Erick (Pierce Brosnan doing a Swedish, not Icelandic, accent reminiscent of the chef on the old Muppet Show), disapproves of his son’s pipe dreams. Even the townsfolk do not want to hear Lars and Sigrit sing their songs. Instead, they demand that they, Fire Saga, sing the local favorite – the Ya Ya Ding Dong song. Lars demands more in their life.

The story carries Lars and Sigrit through the early stages – the Icelandic Song Contest – on their march to the big spotlight at the E.S.C. finals in Scotland. The getting there is great fun as the filmmakers keep up their parody in an almost loving way, bringing our favorite singers all the way to the Big Game. But, the filmmakers do not simply check off all the parody boxes in their construct.

Lars is dedicated, even driven, to be a success in his chosen career. Sigrit is both more practical and whimsical in her equal dedication to Lars’s dream; though for her the thrill is to just be there. And, she gives an offering to her unseen elf friends to help them. Lars in definitely not a believer in her magical friends.

Through sheer luck, Fire Saga keeps moving up in the standings, prompting the Russian contestant, Alexander Lemtov (Dan Stevens), to take the newcomers under his wing. Steven almost, but not quite, steals the show as a gay Russian who staunchly denies it because, of course, “Russians cannot be homosexual.”

“ESC:TSoFS” hits all the buttons, as Lars and Sigrit make their play for greatness, with its original humor, poking fun at Icelanders, Americans and Europeans in general and doing it all in good natured fun. Ferrell and Garner are just right as the performing couple that Lars says he does not “think they are brother and sister.” Sigrit insists they are not. Icelandic humor plays prominent.

I am not sure that I would ever willingly sit down and watch the actual Eurovision Song Contest so I guess I will be satisfied that I saw a parody that may not actually be a parody.

"Eurovision Song Contest: The Story of Fire Saga" is available on Netflix on 6/26/2020.