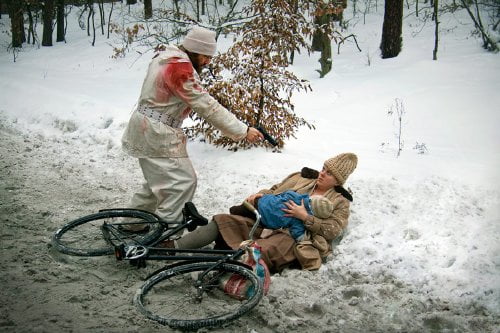 Three American security specialists are on patrol in the remote wilds of Afghanistan when they stumble upon a lone Taliban fighter, Mohammed (Vincent Gallo), hiding in a cave. Before they can react, he fires an RPG at point blank range and kills all three. Mohammed flees the killing zone only to be hit with a rocket blast from a circling helicopter, destroying his hearing, and is taken by American soldiers. He is interrogated, beaten and tortured, then shipped off to some unknown destination. But, the convoy transporting him and other detainees has an accident involving pigs in the road. This fortuitous mishap suddenly sets the Mohammed free in “Essential Killing.”

In the alien geography of Afghanistan, three American soldiers are ambushed by Mohammed (Vincent Gallo, "Buffalo '66," "The Brown Bunny"), who is tracked by helicopter and captured. After torture and interrogation in an unknown place, Mohammed is being transported yet again when his truck overturns and he is able to escape. From a sun-baked terrain to snowy forest, Mohammed continues to fight for basic survival, which, if he is to make it, includes "Essential Killing." Cowriter (with Ewa Piaskowska)/director Jerzy Skolimowski ("Moonlighting," "Four Nights with Anna") gives us one of the most unusual anti-war films to come down the pike in quite some time. The film is almost dialogue free, star Vincent Gallo having won the 2010 Best Actor award at the Venice Film Festival for his projection of terror, caution, cunning and physicality. We only know Mohammed's name from the press notes, as he never speaks to the officer who shrieks that he is a 'piece of sh%t,' nor those who waterboard and beat him. When he is transported out of this facility (Guantanamo doesn't exactly make sense, even though he's been flown there, given where he ends up, although he is suited in an orange jumper) in the back of a military truck, the drive strikes a wild pig in the road and careens down a ditch. Mohammed is able to run, then returns to the scene of the accident to find two men and an SUV, music blaring (the sound design is harsh, another possible link to Guantanamo, because listening to the film's early scenes is torturous). They don't hear his approach and he is able to kill both, stealing one's weapon and clothes. Now clad in black, he runs through snowy pines as a unit with dogs and more copters search. Even against horrific odds (he's snared by a hunter's trap), he manages to get away, bringing one of his pursuers to his death. Now Mohammed has a white jumpsuit, the better to hide him in the snow. Occasionally, we see overexposed flashbacks of Mohammed at home. There is a beautiful woman wrapped in blue cloth holding a baby. We and he hear pronouncements about fighting, no matter how personally abhorrent, for Allah. Then it sounds like helicopters again. But it's not and a particularly brutal new death, a civilian one, follows. There will be more, but there are also Mohammed's survival skills. He eats bark from a tree, then berries which make him hallucinate (the film strobes, a blue cloth washes down a stream, a woman is there and then is not). He watches a woman on a Bicycle (Klaudia Kaca) dismount and begin to breast feed her baby on the side of the road and uses her, too, for nourishment. His final encounter is with a mute woman (Emmanuelle Seigner, "The Diving Bell and the Butterfly"), like himself, who offers haven and healing, but only for a brief time. "Essential Killing" is playing as part of a retrospective at the Harvard Film Archive. One of his earliest films, "Deep End," a coming of age tale at a seedy London bathhouse during the Swinging Sixties, couldn't be more different, yet both films use color, particularly the color red, emphatically. The films even have similar endings in a weird kind of way, although only the new film resembles "McCabe and Mrs. Miller" at this point. ("Deep End" stars Jane Asher, Paul McCartney's pre-Linda squeeze, and 1950's sexpot Diana Dors given the John Waters treatment.) On its surface, "Essential Killing" is a chase and survival thriller, but through his protagonist's actions, first in war, then for survival, and ultimately through his ironic ending, Skolimowski couldn't be clearer in his political intent.

I realized, watching Jerzy Skolimowski’s latest tome, that I have not seen one of his films since 1985’s “The Lightship: and 1982’s “Moonlighting.” Those movies, though very different stories, were both sparse works with little dialogue. The writer-director, with co-scribe Ewa Plaskowska, takes this sparseness to new levels with “Essential Killing,” which has no discernible words coming from our protagonist, Mohammed, only grunting and bellowing.. Skolimowski does something unusual with this bleak story of survival. He makes Mohammed, a member of the Taliban, a sympathetic character – no small feat when considering that the word “Taliban” evokes quite a different sentiment for Westerners. Mohammed, to keep himself alive must perform the titular killing. For him, cast astray in a frigid, bleak landscape barefoot and only prison overalls to protect him from the elements, this essential killing means living. Vincent Gallo takes on a tough role as the near-animal-like escapee who finds himself, quite literally, in the middle of the middle of nowhere. He does not know where he is so Mohammed does not know where he is going. His trek across the forbidding wilderness is a merciless one, battling the cold and, worse, the hunger. He is relegated to digging into an insect nest and pealing the bark off of trees to feed himself and keep going. This is what “Essential Killing” is about, the need to survive but not the reason for this need. This makes for an ambiguous tale but one that rivets your attention for its 84 minutes. There is just one other significant character in “Essential Killing.” Margaret (Emmanuelle Seigner) is deaf and mute young woman living alone on the outskirts of a small village. Mohammed collapses on her doorstep and she drags his battered, unconscious body into her home where she feeds and nurses him. He is on the run and being hunted, though, and Margaret’s acts of kindness can only be short lived. It is amazing how the director makes his characters communicate without words. The mountainous and arid lands of Israel fill in as Afghanistan and the stark winter landscape of Norwegian forests serves as the unnamed place where Mohammed struggles to survive. Photography, by Adam Sikora, is claustrophobic in its close ups of Mohammed as he scrabbles, injured, over the rugged terrain and panoramic in capture the hostile environs in which Mohammed must find a way to survive. One problem I had with the film is the use of sound editing. A number of times during the film, the sound of something, like a body hitting the ground would happen half a second before you saw it happen. This occurred whenever the sound was dubbed in. A nitpick, I know, but a notable flaw to the viewer’s eye. Hopefully, this will not happen in the theatrical release. The score helps to ramp up the tension on already tense scenes. “Essential Killing” is a unique film in concept and execution. Brief moments of action are interspersed with Mohammed’s struggle to survive the elements, hunger and a pursuing enemy. It is a harsh movie that pulls no punches and, on occasion, provides some shocks. There is a relentless look and feel to the film that does not overwhelm Mohammed’s desperate measures to live.