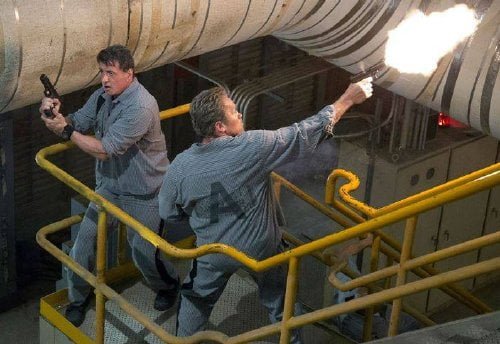 Ray Breslin (Sylvester Stallone) specializes in going undercover as an inmate to check for security breaches in high security federal prisons. Just after his latest spectacular penitentiary slip, he and his partner Lester Clark (Vincent D'Onofrio, "Full Metal Jacket") are offered twice their usual rate by C.I.A. rep Jessica Miller (Caitriona Balfe, "Now You See Me") to test a black site where 'the worst of the worst' are 'disappeared.' But as soon as Ray's taken he realizes he's been set up while being locked up in the most brutal environment ever to form an "Escape Plan."

This paean to 80's action movies from screenwriters Miles Chapman ("Roadhouse 2") and Arnell Jesko ("Mirror Mirror") may not always make the most of sense but it's pairing of Stallone with a joyful, even twinkly Arnold Schwarzenegger is a real kick for those who remember those films and their stars fondly. Director Mikael Håfström ("Evil," "1408") applies more gloss than Stallone's cheesier "Expendables" franchise while production designer Barry Chusid ("Source Code") serves up a high tech prison facility that's like a futuristic nod to Stallone's honeycombed "Demolition Man" deep freeze. Mere seconds after Ray's bundled into a van, his colleagues Abigail (Amy Ryan, "Gone Baby Gone," TV's 'The Office') and tech expert Hush (Curtis “50 Cent” Jackson, "Real Steel") are alarmed to see the tracking chip they've embedded in his arm go dark. Drugged throughout his transport, Ray comes to enough to see a fellow prisoner thrown off his copter. He awakens in a glass enclosure stacked amidst many that barely gives him room to stand and lie down in, policed by truly 'anonymous' guards wearing black Guy Fawkes masks. When he's taken to the prison warden, Hobbes (Jim Caviezel, "Bobby Jones: Stroke of Genius"), it is not the man he's expecting and his stated 'evacuation code' is apparently meaningless (screenplay's first problem - why would the man who wrote “Compromising Correctional Institutional Security” attempt to bail so quickly, let alone divulge his cover). Fellow inmate Emil Rottmayer (Arnold Schwarzenegger) is immediately too friendly, persisting in trying to help 'Anthony Portosi,' a gambit that begins with a staged fight ('You hit like a vegetarian') and lands them both in solitary, which is exactly where Ray/Tony wants to be. This facility's solitary features blaring heat lamps and sleep deprivation, but Roy uses the former to his advantage in trying to figure out just where they are being held. The answer (which features some dicey CGI) isn't comforting. Stallone's still a pile of muscles, his face looking less lifted than it has recently, and if it's a stretch to buy him as a former lawyer turned expert escape artist, his ability to withstand a considerable pounding and keep coming back for more isn't. But it's Schwarzenegger who's the real fun here, obviously enjoying himself tremendously, a glint in his eye as he lofts one liners with ease. The former Governator even gets to speak his native tongue in a highly entertaining diatribe against his jailers. Caviezel isn't known for playing heavies but gives an icy turn here as the quietly malevolent warden. D'Onofrio and 50 Cent are playful, Ryan flirtatious. Also on board are Sam Neill ("Jurassic Park") as a sympathetic prison doctor, Vinnie Jones ("Snatch") as a sadistic rabid dog of a guard and Faran Tahir ("Iron Man," "Elysium") as Javed, a Muslim Arab who joins forces with Ray and Rottmayer. "Escape Plan's" fight scenes aren't memorable, the black site's prison population are generic heavies rather than global threats and Ray's betrayal doesn't have enough meat on its bones, but the sight of Schwarzenegger blasting a giant machine gun while cooling dismissing his targets is real butter on slightly stale popcorn.